When the Kenyan government shut down the Musa mosque for "radicalizing" its followers, local officials searched in vain for someone to take over the mosque. Finally they appointed a nearby real-estate agent, who recruited an 18-year-old high-school student as the imam.

"I was the only one who wasn't afraid," said Khatib Khamis Mwishee, the neighbour who was given control of the mosque in Mombasa, the main Kenyan seaport, earlier this year. "Everyone else refused to take responsibility."

Police informers still watch the mosque during prayers, making sure nobody discusses politics, Mr. Mwishee said. But many Muslims are scornful of it, calling it a government mosque.

As homegrown terrorism rises, Kenya is responding with heavy-handed tactics: police raids on mosques, arrests of imams, a ban on political subjects during prayers, temporary shutdowns of mosques and strict control of their hours, tougher regulation of Muslim human-rights groups, and even the alleged murder of Islamic leaders by police squads.

The crackdown follows a wave of terrorist attacks over the past two years in Nairobi, northeastern Kenya and the Kenyan coast, led by the Somalia-based extremist group al-Shabab and its Kenyan allies, in retaliation for Kenya's military invasion of southern Somalia. At least 148 people were killed by attackers at a university in Garissa in northeastern Kenya in April.

The government's controversial response has included an attempt to close a huge Somali refugee camp and to build a massive security wall along the Somali border. But it is also afraid of homegrown terrorists. President Uhuru Kenyatta in June announced an "anti-radicalization program" and asked for the "complete co-operation" of parents and religious leaders. "Your child might appear devoutly religious, but you must be able to tell when radicalization turns piety to evil," he said.

In July, in implicit recognition of Kenya's strategic importance to global anti-terrorism efforts, U.S. President Barack Obama is making his first presidential visit to his father's homeland. But while the worst terrorist attacks have not been repeated since Garissa, the government's crackdown has provoked tensions and pressures that could erupt at any time.

Here in Mombasa, the government has targeted "radical youths" – its term for young supporters of al-Shabab and the Mombasa Republican Council, a banned separatist group. But by killing or arresting their religious leaders, the government has made it harder to track their movements, analysts say. "It's a very short-term strategy," says Mohamed Daghar, security co-ordinator for Mombasa's county government. "Some of these actions actually fuel radicalization."

Several hundred young Muslim radicals have simply disappeared from the government's radar, he said. "We have no idea where they are now. Before, you could go to their leaders and understand what was happening. Now we are really lost."

In an interview, Mr. Daghar gave examples of what he sees as mistaken policies by the Kenyan government: "the use of excessive force, disappearances, extra-judicial killings, and the rhetoric of blanket condemnations."

He cited the death of Abubakar Shariff Ahmed, better known as Makaburi ("graveyard"). He was the imam at Musa mosque in Mombasa until he was shot dead last April. It's been widely reported that he was assassinated by Kenyan police, just weeks after he announced that Musa would be named "Martyrs Mosque" in honour of imams who were allegedly killed by the police.

"He was our link to the radical kids," Mr. Daghar said. "Now if you ask me where they are, I can't say."

Muslim leaders have continued to be targeted this year. One imam, Khalid Mohamed Ali, was arrested in May on accusations of supporting al-Shabab and "radicalizing" his followers. Police said they found weapons in his home, but his supporters say the police planted the evidence. "This is oppression," said Saddam Mohamed Saad, an official at Mr. Ali's mosque. "You can't accuse someone without evidence."

Imams at mosques targeted by the government are unwilling to speak on the record, but privately they describe a climate of fear, forcing them to avoid politics in any discussions in their mosques, while police informers monitor everything they say.

"If you criticize the government, even two words, you are arrested or called in for interrogation," said one imam who was summoned for police questioning. "If I talk about unemployment, I have to do it in a very careful way, without criticizing the government. If you express what you believe, they think you're a fundamentalist. The police arrest people at night. They can kill you and say you're al-Shabab. They don't want to know if you're innocent or guilty. If you're accused of being a sympathizer, you can be kept in jail for two years."

Some mosques have been ordered to close their doors outside of prayer times. "I think it's unfair," said the imam, who declined to give his name for fear of police retaliation. "Anyone should be free to come here. Maybe they're poor and asking for help. But we didn't argue with the police, because they might think we are supporting al-Shabab."

The government has accused Muslim human-rights groups of links to al-Shabab, and tried to force their closure by cancelling their registration or closing their bank accounts. "It's harassment and intimidation," says Hassan Abdille, executive director of Muslims for Human Rights, based in Mombasa.

"A lot of extra-judicial killings took place, and we were the ones criticizing the government, so they don't like it. Anyone who dissents is considered a 'radical.' It is criminalized."

Many coastal Muslims have long-standing grievances over land and discrimination. They feel their traditional land was stolen by politically connected Christian outsiders with the help of the national government, exploiting the illiteracy of traditional owners who had no formal deeds.

"The entire coastal people feel they're oppressed and voiceless," says Farooq Saad, a Muslim resident. "We're given names like 'radicals' and 'terrorists.' We're just people who want our rights, our own leaders, our own resources."

Those grievances must be addressed if the government wants to defeat terrorism, analysts say. "You need to engage on economic issues," said Emmanuel Kisiangani, a senior researcher in the Nairobi office of the Institute for Security Studies. "If you only use coercion, it's very difficult to win hearts and minds."

While the government has banned the Mombasa Republican Council and arrested its leaders, the separatist group still has many sympathizers and secret members, even in the senior ranks of the Mombasa county government.

"We've been trying to raise our issues since 1963 but the national government isn't ready to listen," said Mohammed, a civil servant and member of the banned group who requested anonymity for fear of arrest. "That's why this generation has decided on violence."

Despite the government crackdown on Mombasa's mosques, hundreds of coastal Muslims are secretly training with guns and grenades in remote forest locations, while others are joining al-Shabab, he said. "People are quiet now because of the arrests and the killings, but is the government aware of what's happening underground? People are more radical now."

Retail thriving in the heart of Kenya as tourist economy suffers
June 26, 2015 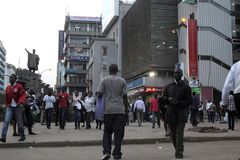