Matthew Kalman
Jerusalem
Special to The Globe and Mail
Published March 14, 2012 Updated May 3, 2018

A Roman-era burial box inscribed "James, son of Joseph, brother of Jesus" was reprieved from the scrapheap of history on Wednesday when a Jerusalem judge completely exonerated an Israeli antiquities collector who had been accused of forging it.

The verdict, delivered by Judge Aharon Farkash in a tiny, crowded courtroom in the Jerusalem District Courthouse, ended a seven-year ordeal for the accused, Oded Golan, 60, but it will do little to extinguish the decade-long scientific controversy over the authenticity of the limestone box which has raged since it was first displayed to the public at the Royal Ontario Museum in 2002.

If genuine, the burial box, or ossuary, is the first physical artifact yet discovered that might be connected with the family of the historical Jesus Christ.

Mr. Golan had been accused of adding the second half of the inscription linking it to Jesus, and then fabricating the patina, the bio-organic coating that adheres to ancient objects, to pass it off as genuine.

But Judge Farkash said the prosecution had failed to prove any of the serious charges against Mr. Golan and acquitted him on all but three minor charges of illegal antiquities dealing and possession of stolen antiquities. Robert Deutsch, a co-defendant, was acquitted on all charges.

"The prosecution failed to prove beyond all reasonable doubt what was stated in the indictment: that the ossuary is a forgery and that Mr. Golan or someone acting on his behalf forged it," Judge Farkash told the court, summarizing his 475-page verdict.

He noted that it was the first time a criminal court had been asked to rule in a case of antiquities forgery.

The spectacular collapse of the trial, nine years after Mr. Golan was arrested and thousands of items were seized from his home, office and warehouses in Tel Aviv, was a severe blow to the Israeli police and Israel Antiquities Authority, who claimed they had exposed "the tip of the iceberg" of an international conspiracy selling fake artifacts to collectors and museums worldwide.

The verdict will be welcomed by those who hope that the ossuary will finally provide a physical connection to the historical Jesus.

But Judge Farkash, who said he had heard from 126 witnesses and sat through 120 sessions that produced more than 12,000 pages of testimony, acknowledged that the collapse of the criminal trial did not signal the end of the scientific debate over the authenticity of the ossuary.

"This is not to say that the inscription on the ossuary is true and authentic and was written 2,000 years ago," he said. "We can expect this matter to continue to be researched in the archaeological and scientific worlds and only the future will tell. Moreover, it has not been proved in any way that the words 'brother of Jesus' definitely refer to the Jesus who appears in Christian writings.'

Judge Farkash was particularly scathing about tests carried out by the Israel police forensics laboratory that he said had probably contaminated the ossuary, making it impossible to carry out further scientific tests on the inscription.

Mr. Golan, who was accompanied to court by his elderly parents, said he was "delighted at the complete and total acquittal I have received here today."

"We brought experts from all over the world who testified that the inscriptions on the items that were suspected of being fakes are completely authentic, following research work by dozens of experts," he said.

Prosecutor Dan Bahat said the case had been complicated by the refusal of a key witness, who was suspected of helping to forge many of the items, to come from Egypt to testify.

"What we tried to do here has set an international precedent," said Mr. Bahat. "This is the first time someone has brought the issue of antiquities forgery before a court. Regarding at least one object, a decanter, the court found it was fake." 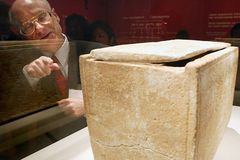