It's a fine ideological line that leads from Arizona's so-called "anti-gay" bill to a shuttered cake store on the east side of Portland.

This week, bowing to massive pressure not only from the public but also from big business and prominent Republicans, Arizona Governor Janice Brewer vetoed a bill that would have extended a set of religious freedoms previously reserved for individual citizens to corporations. In effect, the bill was intended to immunize businesses that refused to serve certain customers because of "sincerely held" religious beliefs – specifically, those who turned same-sex couples away.

The controversy over Arizona's Senate Bill 1062 has ramifications beyond just one state. It is perhaps the most significant inflection point in America's heated social conversation about gay rights – the moment when the protection of equal rights superseded the protection of religious freedom. And in what may be a turning point, even the country's conservative base admitted as much.

"Opponents of same sex-marriage are losing that battle," said Douglas NeJaime, a law professor at the University of California, Irvine. "Recently … both in the court and the state legislature, they've made arguments about religious liberty.

"The Arizona fight has shown that strategy shown for what it really is: an attempt to stall same-sex marriage."

Since the U.S. Supreme Court struck down the Defense of Marriage Act last year, the U.S. public view of same-sex rights has, in very broad terms, become more favourable, with state-specific extremes in either direction. Some states, such as New Jersey and Illinois, have essentially legalized same-sex marriages. Others, however, have moved to not only limit such practices but also enshrine the right to refuse services to same-sex couples on certain religious grounds.

The Arizona state legislature's version emerged last year, championed by a conservative organization called the Center for Arizona Policy. Like similar groups in other states, CAP sought to frame the proposed law as a means to protect religious business owners from persecution – in other words, to reaffirm the rights provided by the First Amendment of the Constitution.

As examples of this persecution, the group highlighted two cases: a New Mexico photographer who was fined for refusing to shoot a same-sex wedding, and a Portland-based cake shop whose owners say they were forced to shut down and operate from home after refusing to bake a wedding cake for a lesbian couple.

The reaction to the bill was quick and fierce. Although it made no mention of denying services to gay couples, myriad rights groups claimed that it was designed to do exactly that.

The most striking criticism came from the conservative base that might have been expected to stand behind the bill. Arizona's most high-profile Republicans, including U.S. Senator John McCain, urged Ms. Brewer to kill the proposed law. Former Republican presidential candidate Mitt Romney did the same. Three Republican state senators who originally supported the bill publicly also turned their backs on it, calling it a solution in search of a problem.

What sealed the fate of the bill, though, was opposition from an unusual quarter: corporations and even a sports league that saw it as a threat to their commercial interests.

As the Arizona bill was debated, myriad business groups began to raise the alarm about the financial implications of passing such a law, from lawsuit threats to boycotts.

Some of America's most powerful companies also took the unusual step of publicly slamming the bill. The National Football League reportedly considered the possibility of relocating next year's Super Bowl from Phoenix, potentially costing Arizona millions of dollars in economic activity. Criticism also came from Apple, the technology giant that recently opened a 1.3-million square-foot site in Mesa. Bob Worsley, the state senator for Mesa who in November called Apple's new facility "a sign that Arizona has dramatically improved its image nationally," was one of the three Republican senators who eventually changed his mind on SB 1062.

Sen. Worsley did not respond to a request for comment.

Supporters of the bill show no signs of backing down. CAP director Cathi Herrod, the bill's chief author, said it was essentially the victim of a smear campaign that sought to demonize it as anti-gay, rather than pro-religious freedom.

"Opponents were desperate to distort this bill rather than debate the merits," she said. "Essentially, they succeeded in getting a veto of a bill that does not even exist."

Those same forces may doom attempts to use the religious freedoms argument in similar laws proposed or under consideration in almost a dozen states, including Ohio, Georgia, Missouri and Oregon.

And as those measures come under similar scrutiny across the country in the coming months, proponents and opponents of same-sex rights will get plenty of chances to find out whether the reaction to the Arizona bill was anomalous or indicative.

"There's been a lot of progress, and this was an attempt to halt that forward momentum and turn back the clock on a lot of these gains," said Alessandra Soler, executive director of the American Civil Liberties Union of Arizona.

"I think this is an issue that is trending in the right direction," she added. "The country is ready."

Arizona decides some beliefs come at too high a price
Subscriber content
February 28, 2014 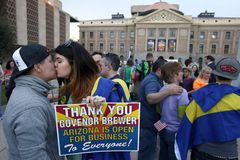