The huge portrait of Mao Zedong that has hung over Tiananmen Square for nearly 66 years has always been a potent symbol of the durability of China's Communist rule.

It has taken on new meaning in the past two years, as Mao's iron rule finds echoes in China's current leader, President Xi Jinping, who is winding back years of liberalization by cracking down hard on dissent and ordering a wholesale reindoctrination of party officials. At the same time, new cracks are appearing in China's economic foundation, a coincidence that is rekindling a long-standing debate about the viability of the Communist regime.

David Shambaugh, a prominent China expert at George Washington University who had been seen as friendly to Beijing, fuelled the debate with a recent essay arguing that Mr. Xi's "despotism is severely stressing China's system and society – and bringing it closer to a breaking point."

He cited the eagerness of wealthy Chinese to leave the country and the risks to Mr. Xi from an anti-corruption campaign that threatens powerful entrenched interests, and also argued that economic reforms will be stillborn without accompanying political change. "The endgame of Chinese communist rule has now begun, I believe, and it has progressed further than many think," he wrote in a commentary published in The Wall Street Journal.

China has responded sharply. The state-run Global Times newspaper called Prof. Shambaugh an "alarmist" whose "vulgar" work relies on "divining" China's future to "attract the eyeballs of Western public opinion." But the thesis has revived hopes among those eager to see the undoing of communist China.

"It doesn't take 30, 40 or 70 per cent of people standing on the street to make change happen," Hu Jia, one of China's most prominent dissidents, said in an interview. "If just 10 per cent come to the street, the social system will already begin to crack."

Worries, meanwhile, are growing about the economy. Citibank estimated that $100-billion (U.S.) per month in capital fled China near the end of last year, while Chinese researchers have said as much as $1-trillion could flow out in 2015.

"People are losing confidence in China's abilities to progress," said Gordon G. Chang, whose 2001 book, The Collapse of China, made waves by predicting, wrongly, that it would all fall apart by 2011. He said Mr. Xi is leading China into regressive economic changes that could well backfire including the rebuilding of state-owned monopolies.

"It's not just that you need political reform," he said. "You need a leader who has a different vision for China than Xi Jinping."

But who would or could push back? Prof. Shambaugh would not say. "Sorry, but my crystal ball can't see things that clearly," he said in an e-mail response to that question. "Try a sociologist."

On the other side of the debate is the argument that China is not yet at a "breaking point." For example, the factors that contributed to the fall of the Soviet Union and Eastern European communist regimes – strong popular opposition led by labour unions or prominent dissidents, economic collapse and too-rapid change from the top – exist, but are not seen as sufficiently potent in today's China.

Tibetan and Muslim minorities are angry at their treatment, but ethnic groups have been heavily and, from the perspective of Beijing, effectively repressed. No countercommunist leader of any stature has emerged inside or outside China. The country's economy is slowing, but wages are still rising (at a slowing pace) and unemployment remains low. People are still buying Bentleys, not joining bread lines.

Chinese students, after 25 years of propaganda following the Tiananmen Square massacre, are little inclined to challenge a system they've been taught to love, or at least not to question. And even China's increasingly restive workers do not appear ready to topple the system.

As the slowing economy creates factory upheavals, the number of monthly strikes and protests has risen from 60 a month two years ago to 200 recently, according to Geoffrey Crothall, a spokesman for China Labour Bulletin, a Hong Kong non-profit group that advocates Chinese worker rights. But protests are "not really, by any stretch of the imagination, related to regime change," Mr. Crothall said. "That would be several steps beyond what workers are thinking at the moment."

Nor does the Chinese middle class appear angry with the status quo. And there seems little appetite for change from the top down in the form of the political reforms attempted by Mikhail Gorbachev, reforms that created a party backlash and preceded the eventual breakup of the Soviet Union.

"Any Chinese version would lack the rationale and ideology Gorbachev had – a deep and profound belief that the system needed liberalization and that it would work. So an intraparty leadership struggle would instead play out as pure brutal, personal and factional feud," James Mann, a former U.S. journalist who wrote The China Fantasy: Why Capitalism Will Not Bring Democracy to China, said."

In any case, Mr. Xi has a robust police state on his side, not to mention Western backing. A destabilized China is not in the world's interest. It "is an economy which for the past 10 years has been responsible for at least 25 per cent of global growth, so it is way, way too big to fail," Willy Lam, a Hong Kong-based expert and senior fellow at the Jamestown Foundation, said.

Mr. Xi's personal popularity also cannot be discounted. "A great majority of people you talk to in local areas …still think the central government is this benign institution that is ultimately going to rescue them," said Lynette Ong, a China specialist at the University of Toronto. "I don't think those people really want a regime change."

The Chinese leader leans on two sources of power – the network of influence built by former president and long-serving strongman Jiang Zemin and the military. Mr. Xi's anti-graft campaign has tackled high-profile figures in both camps, raising questions over how much backlash he might provoke. He has already moved against potential sources of discontent, and reportedly has reshuffled the Central Security Bureau that provides personal protection to the political elite.

That may be a sign of worry, but abrupt change for China is a bigger worry in the view of other observers. "The only viable alternative to the Chinese communist party would likely be a military coup," Charles Burton, a former Canadian diplomat in China and associated professor at Brock University. "We could be positively nostalgic for the good old days of [Mr. Xi's predecessor] Hu Jintao."

With reporting by Yu Mei in Beijing 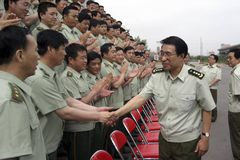 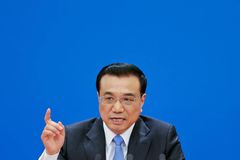