A week has passed since the Orlando nightclub shooting that killed 49 club patrons and the funeral processions are wrapping up, but survivors and victims' families say they realize the nightmare will live on long after the world's attention fades.

Jeannette McCoy made it out of the Pulse nightclub alive on June 12 as gunman Omar Mateen continued a shooting that also wounded and maimed 53 others before he died in a hail of police gunfire.

McCoy said the love and support can only do so much to help. It's a temporary balm, she said, and she worried that while life may return to normal for some people after the world's attention moves on, it won't for Orlando's LGBT community.

"All of this has been so traumatizing," she said. "The way that our community has been impacted, it's just so unfortunate. We have so many wonderful lives that have been lost. When we look at all these crosses, and all these faces, all these stories, it hurts. It hurts so much."

On Saturday, across from Cathedral Church of St. Luke, where Christopher Andrew Leinonen's funeral was held, hundreds lined the street holding "We Support You" and other signs. The 32-year-old Leinonen was with his friends at Pulse early last Sunday when gunman Omar Mateen opened fire, killing 49 club-goers and wounding 53 others. Mateen died later after being shot by police.

Brandon Wolf was with Leinonen and shooting victim Juan Ramon Guerrero. The 27-year-old Wolf managed to make it out alive.

He says Leinonen, whom he called Drew, changed his life, and eased his pain when he was hurting.

"He looked me in the eyes that night and did what Drew always did, he said 'I love you,' Wolf said. "That is Drew's lasting message to us, 'I love you.'"

He called Leinonen "my once in a lifetime person. He eased my pain when I was hurting, he laughed my worst jokes."

Investigators are still interviewing witnesses, and looking to learn more about Mateen and others who knew him well, including members of his mosque.

A lawyer for the Council of American-Islamic Relations said that the FBI interviewed a man who worshipped at the same mosque as Mateen. Omar Saleh said he sat in on the Friday interview at the Islamic Center of Fort Pierce, the same mosque that Mateen attended near his home. Saleh said the interview lasted about 30 minutes.

Meantime, the wave of support for shooting victims and survivors continued unabated on Saturday. Around Orlando people prayed on the street and left balloons, flowers, pictures and posters have been left to honour the victims.

Dozens of people waited two-to-three hours at Realm Tattoos to get one of the recently drawn "One Pulse" tattoos etched into their skin. The tattoos are free, but people are encouraged to leave a donation for the victims, which will be distributed by Southern Nights, another Orlando nightclub.

Jonathan Betancourt, 36, the shop's owner, said he was surprised at how fast the community came together in such a short time.

Still, family members of those killed know the grief and anger they're feeling is just beginning. They've been too numb this week to really feel much of anything since the massacre.

And they say it's been especially tough for them to see constant images of Mateen's face on television.

"I'm still in a state of shock so the anger and hatred for Chris' killer has not fully kicked in," said Mark Bando, Leinonen's father, who is a retired Detroit police officer. "Those of us who have to go on living our lives without Christopher can surely feel sorry for ourselves but the real tragedy is Christopher's future has been taken from him."

Couillard whisked away from Orlando shooting vigil after incident
June 16, 2016 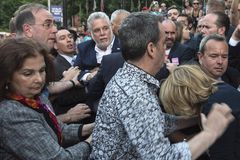 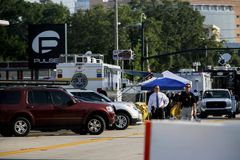