Canada's support for net neutrality at a time when the U.S. appears set to roll back its own Internet freedom regulations is an advantage to Ottawa as it tries to encourage major digital media firms such as Netflix and Google to support and distribute more Canadian-made content, Canadian Heritage Minister Mélanie Joly says.

Ms. Joly has been in California over the past week meeting with U.S. media, entertainment and tech executives in Los Angeles and San Francisco to beef up support for Canada's arts and entertainment industry exports, including promoting Canada's post-production and video games industries.

Among her key messages in meetings with high-level film and tech leaders such as Cheryl Boone Isaacs, president of the Academy of Motion Picture Arts and Sciences, Canadian filmmaker Denis Villeneuve and executives from Google and Facebook, is that a free and open Internet is one that includes access to a wide variety of content, particularly that is produced outside of Hollywood.

Her visit comes as the U.S. and Canada appear headed in different directions when it comes to policing how Internet service providers control access to online content.

Last week, the Canadian Radio-television and Telecommunications Commission ruled that ISPs can't discriminate between types of online content in a case that prohibited Quebecor Inc.-owned Videotron from offering music streaming services to some wireless customers that wouldn't count toward their monthly data caps.

The ruling has been hailed as a win for Ottawa's support of "net neutrality," a term that means all Internet traffic should be treated equally.

At the same time, Silicon Valley giants have been gearing up for a fight with U.S. President Donald Trump's new appointees to the Federal Communications Commission over what they fear will be rollback in U.S. laws supporting net neutrality. "Sorry Canada, now you're in the class with backward India," Roslyn Layton, an FCC-adviser appointed by Mr. Trump, wrote on Twitter after last week's CRTC ruling.

Ms. Joly said her message that Canada supports freedom of choice on the Internet resonated in her talks with Silicon Valley leaders. "It is certainly an advantage," she said. "That's why we're saying cultural diversity is important to us but, by the way, we profoundly believe in the freedom of the Internet and net neutrality and we are committed to it."

In contrast to some European countries, which have threatened punitive legislation to extract concessions from tech giants to support their cultural content, the federal Liberals have been taking a more collaborative approach to U.S.-based digital media companies that now control the vast amount of content streaming into Canadian homes over the Internet.

Ms. Joly has already ruled out the idea of taxing tech giants such as Amazon and Netflix based on revenues earned in Canada. She said her visit to California was primarily an "information finding" trip, rather than a chance to raise the threat of protectionist legislation.

Her efforts in Los Angeles included the set up of an advisory committee made up of Canadians working in the entertainment industry to help Canada expand its cultural exports.

Even so, Ms. Joly came away with few concrete promises from her meetings, instead describing her talks with Hollywood and Silicon Valley as part of an "ongoing conversation." She acknowledges Canada likely faces an uphill battle in convincing media giants to voluntarily invest in Canadian culture. "I'm optimistic," she said, "but I'm not naive." 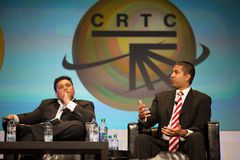 Opinion
Canada’s analog broadcasting policy makes no sense in a digital world
April 18, 2017
Follow Tamsin McMahon on Twitter @tamsinrm
Report an error Editorial code of conduct
Due to technical reasons, we have temporarily removed commenting from our articles. We hope to have this fixed soon. Thank you for your patience. If you are looking to give feedback on our new site, please send it along to feedback@globeandmail.com. If you want to write a letter to the editor, please forward to letters@globeandmail.com.
Comments