The publicity materials for Justin Trudeau's inaugural event in China this week promised a splashy debut.

"Why would this great leader, famous for his good looks and youth, choose to visit Sina first?" asked the official news account of the company, a Chinese online giant that made Mr. Trudeau the guest of honour at its Beijing headquarters on his second official visit to China.

The company promised answers, and "broadcast and reporting of the entire proceedings," when Mr. Trudeau arrived Monday morning.

But in a country that rarely allows foreign leaders unfiltered access to its people, no live images of Mr. Trudeau appeared to the millions of people who tuned in on Sina-owned Weibo, one of the country's largest social media and digital broadcast platforms.

Mr. Trudeau spoke for nearly an hour in an event to promote Canada as a tourism destination. He described his own campfire surf-and-turf bachelor party in Newfoundland – calling the province's Jockey Club brand "good terrible beer" – admitted to once buying a sleeveless lumberjack jacket at Toronto's Kensington Market and promised: "It's not just me. Everyone is nice in Canada."

But Chinese viewers at first saw only a delayed 36-second clip of Mr. Trudeau, in which he urged them to "make sure you're following me on Weibo." It was a supportive gesture for a micro-blogging service whose users outnumber Twitter users – but whose operations are also a key element of China's censorship regime.

Only hours later was more of Mr. Trudeau's appearance made available.

Determined to control what its people can hear, China gives foreign leaders the ability to speak live to its people on only very few occasions. In 2009, when it gave that privilege to a U.S. president, it cut away from a speech by Barack Obama when he said: "recall that earlier generations faced down fascism and communism not just with missiles and tanks, but with sturdy alliances and enduring convictions."

Mr. Trudeau made no such political remarks in his Sina appearance, speaking only about the "extraordinary" experience of backpacking through China in the early 1990s. For his efforts, he won tens of thousands of new followers.

"We are very pleased to have reached so many Chinese Web users, via the country's largest social-media platform," said Chantal Gagnon, press secretary to Mr. Trudeau.

"I can assure you that he always stands up for freedom of expression, at home and abroad."

But the importance of Weibo, as a medium for both expression and repression, underscores the difficult balances that China can require of foreign democratic leaders eager to join hands with the world's second-largest economy, but nervous about appearing too supportive of an autocratic regime.

Mr. Trudeau, however, offered no public comment Monday on the role Weibo plays in aiding the Chinese government's bid to purge online discourse of discussions it deems off-limits – and punish those who violate its demands.

"Companies like Sina-Weibo are required by law to police their networks. This means that many companies have put in place extensive censorship and surveillance systems," said Ron Deibert, director of the Citizen Lab with the Munk School of Global Affairs at the University of Toronto.

Mr. Trudeau "has many values and interests to balance in representing Canada's engagement with China, from human rights to the economy," Mr. Deibert said. And the words of a Canadian prime minister are unlikely to accomplish much in changing policies that are core to the social controls used by the Communist Party to retain unchallenged power.

"But that doesn't mean he should say nothing," said Mr. Deibert, whose lab has been a leader in documenting the ways Chinese online companies use increasingly sophisticated technology to parse speech and delete offending commentary.

Weibo itself has struggled to comply with government censorship demands. In June, it was forced to briefly halt its video service for "failing to promote core socialist values." Three months later, it openly advertised for 1,000 people to join its team of "Weibo supervisors," who are paid to monitor and report content.

The company took few chances with Mr. Trudeau's visit. It invited more than a dozen local "KOL" figures – "key opinion leaders" with large online followings – to attend, but barred them from bringing in camera equipment.

"By failing to challenge Sina Weibo's censorship during his visit there, Prime Minister Trudeau sent the message that Canada isn't worried about that behaviour," said Sophie Richardson, China director for Human Rights Watch.

She warned that in using Weibo as a platform to promote tourism, Canada "will almost certainly have to subject itself to censorship, including not being able to post certain words that are deemed sensitive by the Chinese government."

Canada should condemn any such acts, she said, and "commit to publicly reporting all attempts by Chinese authorities to censor any information."

Tourism is a major push for Canadian officials as they seek to boost Canadian profits from China's rise. Chinese tourists have in recent years become a coveted and heavy-spending demographic of travellers.

Next year has been designated an official year of Canada-China tourism, and Chinese tourism firms are already moving to promote Canada.

Chinese tourists have, to this point, largely come to Canada in summer. But Caissa International, a Beijing-based travel firm, has recently launched tours to ice fish, aurora-watch and take part in Quebec's Winter Carnival.

Mr. Trudeau on Monday made his own pitch, plugging Canada's natural beauty and "a diversity of cultures, of languages, of personal experience that is hard to find anywhere else in the world."

He took the stage with four millennial Chinese who recently took trips to Canada funded by Canadian tourism authorities.

Mr. Trudeau presented himself as a fellow traveller, striking common cause in the thrills and stresses of discovering new places – and then returning home to discover that "you no longer quite fit" into the spaces left behind.

He also offered a joke about what qualifies as typical Canadian food.

"You can put maple syrup on anything and that makes it Canadian," he said. 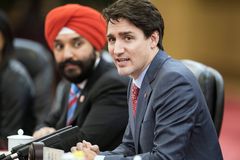 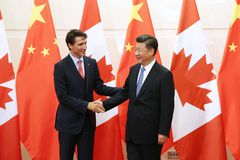 Sex, snakes and spycraft: A lurid tale emerges of a billionaire’s ascent to riches in China
November 26, 2017 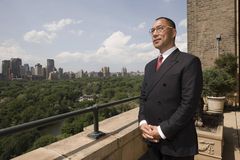