Our plan was simple. We would take a quick drive around Cairo to get a sense of the street, then try to find out more about how the Egyptian security forces and pro-Mubarak demonstrators were figuring into this uprising.

Patrick Martin, The Globe and Mail's Middle East correspondent, is a veteran of the region. I had flown in a few days earlier, thrilled at the chance of returning to the Middle East, where I had previously been posted for four years, to cover this fulcrum moment in history.

Driving through Giza, Dokki, Mohandessin, Imbaba and Shubra, the idea was to see what life was like Thursday for people away from the central showdown in Tahrir Square.

We were surprised to see signs that life was returning to normal: A long lineup at the ATM, women buying food in the market and traffic returning to quiet, leafy streets.

We had made our daily phone calls to our families in Canada, with Patrick reminding his son to shovel the neighbour's sidewalk. My husband was about to hop on a flight from New York to Toronto, where our kids would be waiting. We'd talk again when he landed.

"Shubra is bustling today," I tweeted on my Blackberry as our car wound its way toward downtown. Then things took a sudden turn.

Eight men surrounded our car. They were dressed in plain clothes, and at first we thought this was just another vigilante checkpoint - groups of neighbours who searched cars before allowing them to pass.

These men, however, were different. They had walkie-talkies and appeared to be far more organized. They were much more aggressive.

One of the men asked our driver, Adel, for his identification, before turning his attention to Patrick and me in the back seat: "Who are you exactly? I want to know exactly who you are," he demanded, seizing our passports.

At first, we ignored him, hoping he would assume we were tourists and let us pass. But he examined our travel documents closely: Patrick's was rife with Israeli stamps. Mine was filled with journalist visas to countries including Afghanistan, Yemen and Saudi Arabia.

We had both arrived in Egypt on tourist visas, a fact that could technically get us in serious trouble with the Interior Ministry.

We knew before we left our hotel that Egyptian security forces and pro-government gangs were hunting down journalists at their offices and in hotels.

Some of our colleagues had been kicked, punched and beaten in and around Tahrir Square. By the end of the day, some would be hospitalized.

We always tried to stay away from the "pack," in part to avoid getting swept up in a crackdown.

Egyptians, of course, face a far greater danger than us. But yesterday, foreign journalists were being specifically singled out, with state television suggesting that we were somehow responsible for inciting the violence in Tahrir Square.

This represented a clear attempt on the part of the government to intimidate journalists and suppress our reports.

What we would learn, over the course of the day, is that the Egyptian security forces were playing a key role in this crackdown.

At that moment, our car surrounded, our passports gone, Patrick and I got the sinking feeling that we were about to break the golden rule of foreign reporting: We were about to become the story.

Our passports were handed to another man with a walkie-talkie who jumped into our car's passenger seat. He ordered Adel to drive, clutching our identification in his hand the whole time.

"Please give us our passports back. We are Canadian citizens," Patrick said.

"In a moment," the man replied, unmoving.

I hid my BlackBerry under my bag and tweeted. In retrospect, it might seem like an odd response. I was not scared of this man, who was a thug if I've ever met one.

But I was scared about the prospect of being taken where we couldn't be found, disappearing without a trace from the streets of Cairo.

"We are being taken into some kind of custody," I tweeted. "Military have commandeered us and our car."

I tried to send a separate text message to Stephen Northfield, The Globe's foreign editor, but the service was blocked. Our ordeal, it seemed, would have to be tweeted.

The car ride did not last long. Adel was brave, but rattled.

We were taken to a street about a 20-minute walk from Tahrir Square, near a Coptic church, that the military had blocked off with a tank and an armoured personnel carrier at either end.

I asked Patrick to note the time. It was exactly 3 p.m. We were ordered out of the car by a captain dressed in an Egyptian army uniform, who smoked a cigarette and had a machine gun.

He collected our passports and demanded Patrick's phone, city map and notebook. At first he refused, and the two got into a yelling match.

"You are under my orders!" the captain yelled, telling Patrick to sit on the curb. The captain confiscated my BlackBerry, my iPhone and my digital audio recorder.

He took the keys from Adel and sped off around the corner in our car, returning a few minutes later.

At one point, I approached the captain. I told him I had two young children at home, that my family would be worried and begged him to let us place one call to our office so they would know where we were.

I imagined my husband landing in Toronto and reading my Twitter feed which ended with: "My sms [short-message service]to Toronto is blocked."

"You are giving me a headache," the captain said, and walked away.

About 20 other foreigners were seated on the curb. The group included a pair of Irish radio reporters, a Canadian freelance photographer, on assignment for The National newspaper, and a four-year-old American girl, who had been on the way to the airport with her mother and grandmother, tourists caught in this mess.

The little girl, with blond hair and a flowered shirt, was a year older than my eldest daughter. I couldn't believe she was being held, like a criminal, on the street, prevented from leaving the country.

The security forces that held us appeared to be a mixture of military, secret police and officials from the Interior Ministry.

Patrick and I kept asking questions. Why we were being held? On whose authority? When we would be freed?

The answers kept changing and never made sense. We were told we were being "protected" but barred from all communication. We were told there was a "secret operation" that never materialized.

Meanwhile, soldiers and officials from the Interior Ministry took our phones and passports behind a white van.

Periodically they would call one of us for questioning, then order us to sit back down.

At one point the captain came up to me, waving my iPhone in my face: "You deleted material before you gave this to me!" he said.

We were never subjected to physical violence, but we were held at gunpoint. Some of the younger soldiers almost seemed embarrassed by our treatment and whispered to us not to be afraid.

I asked one for a cigarette, looking for an excuse to chat. He told me not to worry, that it would all be over soon. He looked less than 20 years old.

Patrick reassured us all that because we were in the hands of the military, rather than the secret police, there was less chance of being harmed.

Still, at one point, we toyed with the idea of making a break for it. Our detainers, however, were armed to the teeth with bayonets and machine guns.

No way would we put any of these other people at risk. We decided to wait it out.

At one point, another white van pulled up. It looked like we were going to be rounded up and taken somewhere else.

"Should we refuse to get in?" the photographer whispered to me. "If we all refuse, they can't force us."

But they could. We whispered our home phone numbers to each other and memorized them, in case somebody managed to get out. After an hour, the van drove away empty.

Any illusion that the Egyptian military was neutral in this uprising was shattered. Soldiers shook down anyone bringing in humanitarian supplies - food, water, bandages and medicine - to the square.

It was getting dark. The four-year-old girl's mother made a makeshift bed out of some luggage and tucked her daughter in.

Anybody who had to go to the bathroom was taken through an alleyway into a building that appeared, at one time, to have been a bank. The soldiers stood sentry outside the toilet stall, holding knives.

Our ordeal ended as suddenly, and surreally, as it had begun.

Three hours and 15 minutes after we were first rounded up, the captain called the names of the American family with the four-year-old.

He handed them back their passports and told them they could leave.

My name was called next. The captain handed me my passport, and then gave Patrick his. We fished our cellphones and batteries out of a tangled pile on a chair and were told we were free to go.

Adel, Patrick and I were escorted back to our car. Looking back, the rest of the foreigners remained on the curb, their names yet to be called. We have no idea what happened to them.

Before we left, the captain stopped us: "Sorry, sorry but you must understand …" Then he tried to shake our hands.

With a report by Patrick Martin 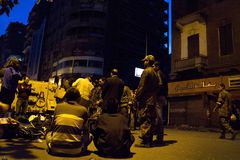 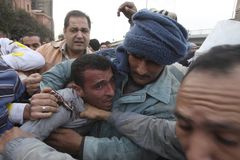 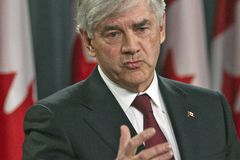 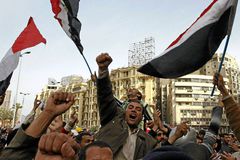 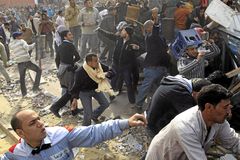