AT THE GATES OF GAZA

GAZANS AND ISRAELIS, ONE YEAR AFTER THE WAR
For 51 days last summer, war broke out between Israelis and Palestinians. The frontier separating the Gaza community of Shejaia and the Israeli kibbutz of Nahal Oz became a battlefield: Israeli soldiers rolled across it in tanks, while Hamas fighters tunneled under it. Globe correspondent Patrick Martin and photographer Heidi Levine recently visited families in the two communities to see how the frontier, history and the scars of war divide them still
Brightcove player
The view from Gaza: Watch Patrick Martin set the scene on the boundary between the Nahal Oz kibbutz and Shejaia

When the smoke of battle had cleared from the 1948-49 war over the establishment of the state of Israel, Arabs who had lived on the land that is now Nahal Oz had fled to Gaza, taking refuge behind Egyptian lines.

Most planted themselves in Shejaia, a Gaza neighbourhood that looks out on the land they had left.

The years that followed were marked by cross-border raids and uneasy periods of calm. The residents of the Nahal Oz kibbutz enjoyed prosperity and, eventually, a sense of security, until the 51-day conflict in 2014, when a tunnel was dug from Shejaia to the kibbutz. Hamas fighters surfaced in a field and killed five Israeli soldiers before retreating back to Gaza. Nahal Oz’s sense of invulnerability was shattered, and the refuge of Shejaia was lost in Israel’s punishing raids.

A year after the most devastating war between Israel and Palestinian militants in Gaza, The Globe and Mail returned to the two communities most directly affected by the conflict – and found two peoples more committed than ever to the rightness of their conflicting causes. 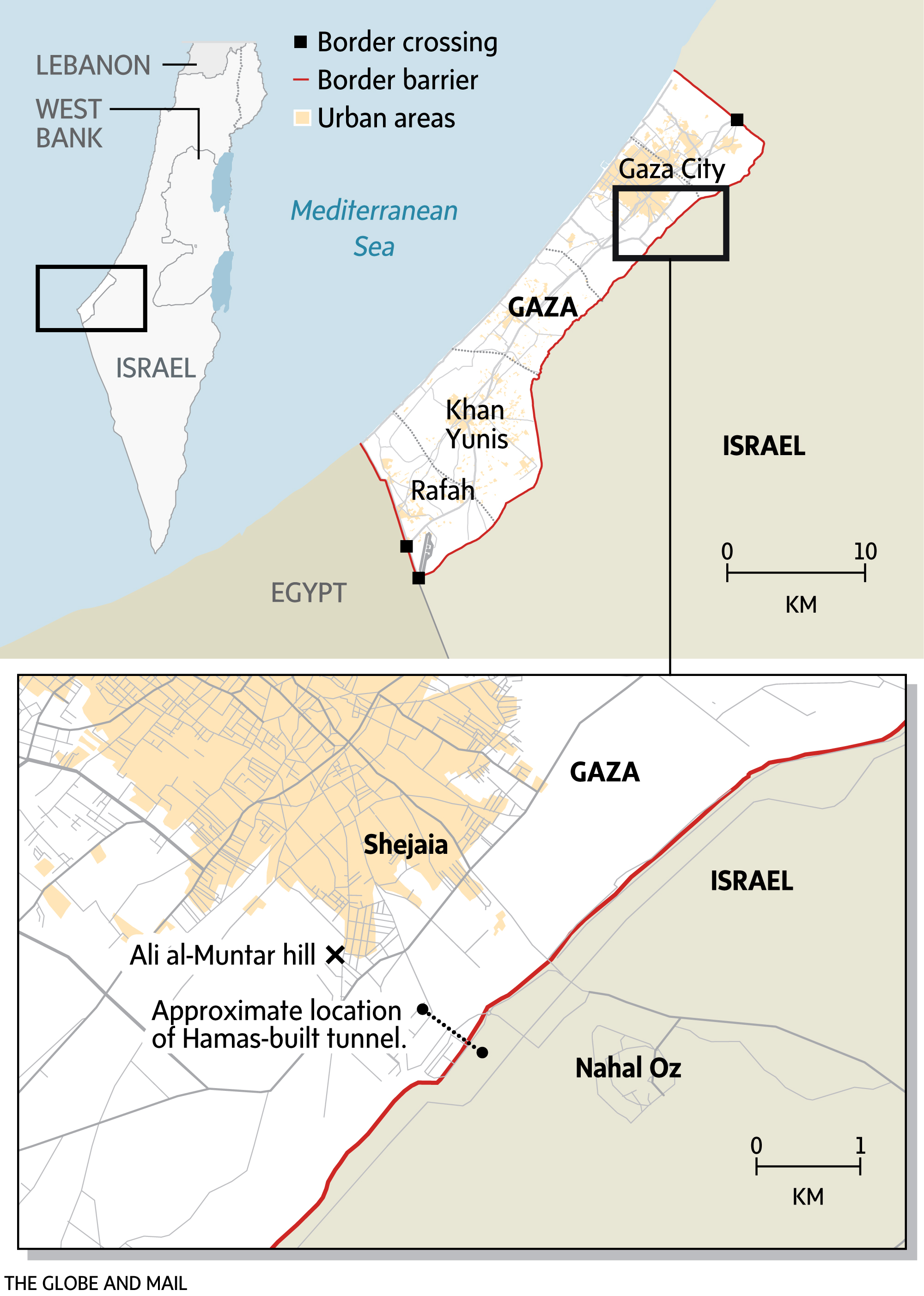 Among the 70 young Israelis who first settled Nahal Oz in June, 1953, Sarah and Yankale Cohen are two of the five still living. Both were 19 when the project began, and in 1956 they married. 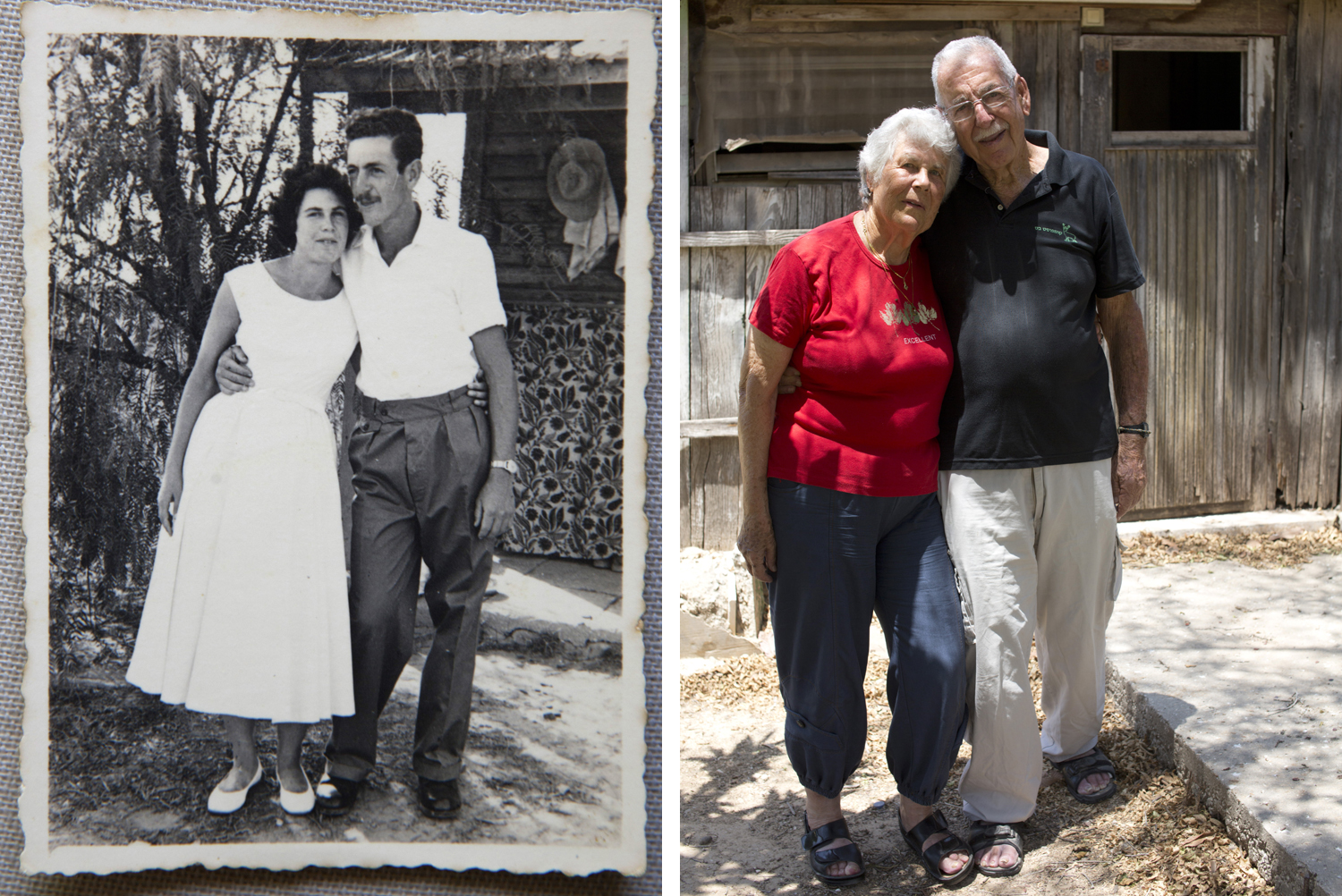 The Cohens, in their wedding picture in the 1950s and today.

Like all the pioneers here, the Cohens’ focus was on security, building communal facilities and farming. Mr. Cohen would eventually become a first-rate agronomist, specializing in potatoes. Consulted the world over, he even spent three years in Egypt advising vegetable farmers there.

The couple bore four children. They and the Cohens’ 10 grandchildren do not live on the kibbutz. The children say they sought urban lifestyles and greater opportunities. The grandchildren come frequently to visit.

The Nahal Oz founders had wanted to establish their kibbutz on some elevated land farther back from the frontier. It was Israel’s one-eyed military commander, General Moshe Dayan, who insisted that they put down roots right beside the border. Around the country, such communities formed a set of boundary markers. Nahal Oz’s proximity to the front line made it a frequent target.

When Nahal Oz’s young head of security was ambushed and killed by fedayeen in 1956, Gen. Dayan came to Nahal Oz himself to deliver the eulogy. 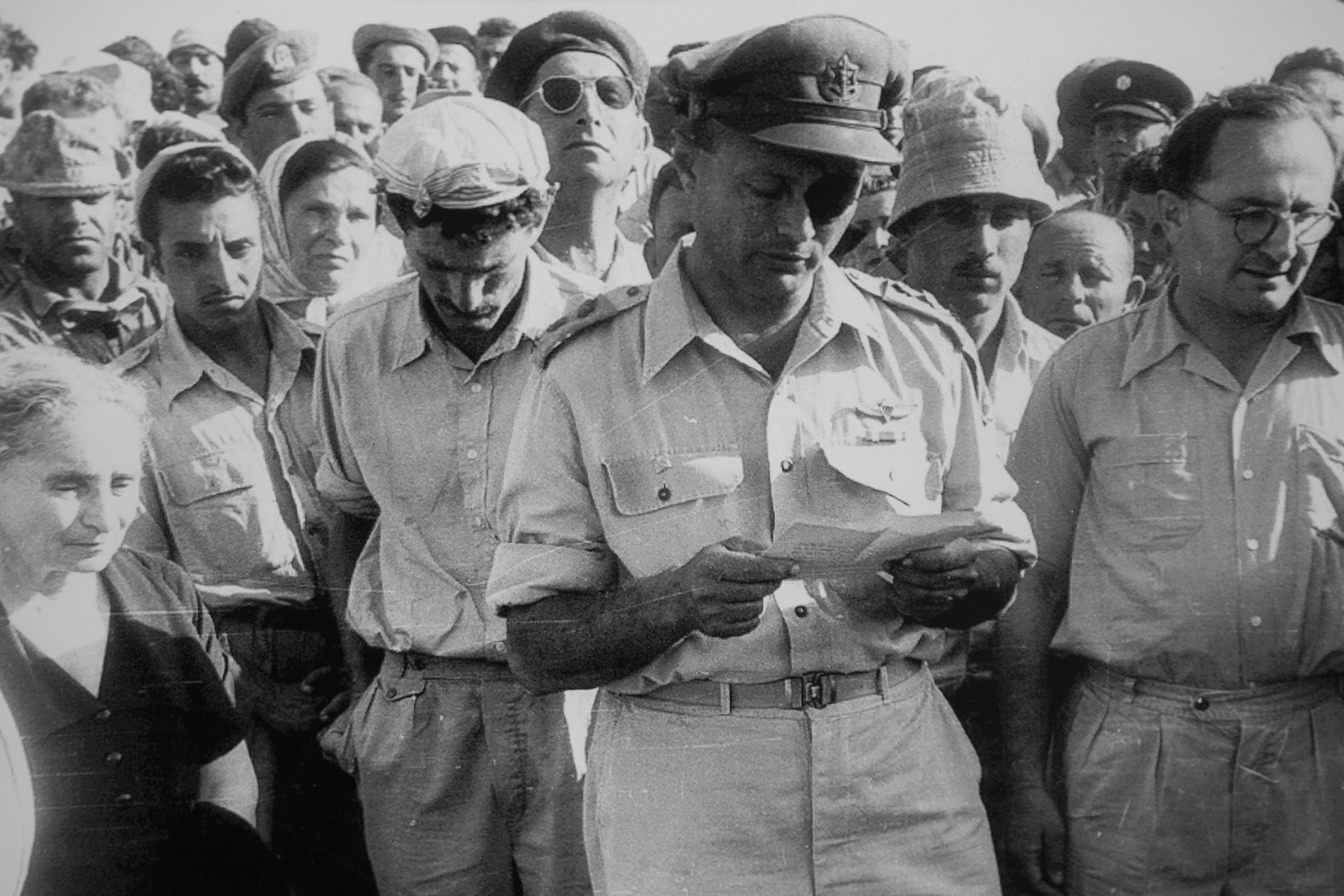 Gen. Dayan, delivering the eulogy heard around the country. (Moshe Fuchs for Bamahane/courtesy of IDF archives)

In a brief but famous address heard on Israel Radio, Gen. Dayan told the mourners not to cast blame on the Arab attackers. “For eight years they have been sitting in the refugee camps in Gaza,” he reminded them, “and before their eyes we have been transforming the lands and the villages, where they and their fathers dwelt, into our estate.”

The young people of Nahal Oz, he said, bear “the heavy gates of Gaza on [their] shoulders,” a reference to the biblical Samson, who carried the gates to the top of a hill in Gaza that lies in sight of where the kibbutz now stands. “This is the fate of our generation,” he concluded, “to be prepared and armed, strong and determined, lest the sword be stricken from our fist and our lives cut down.” 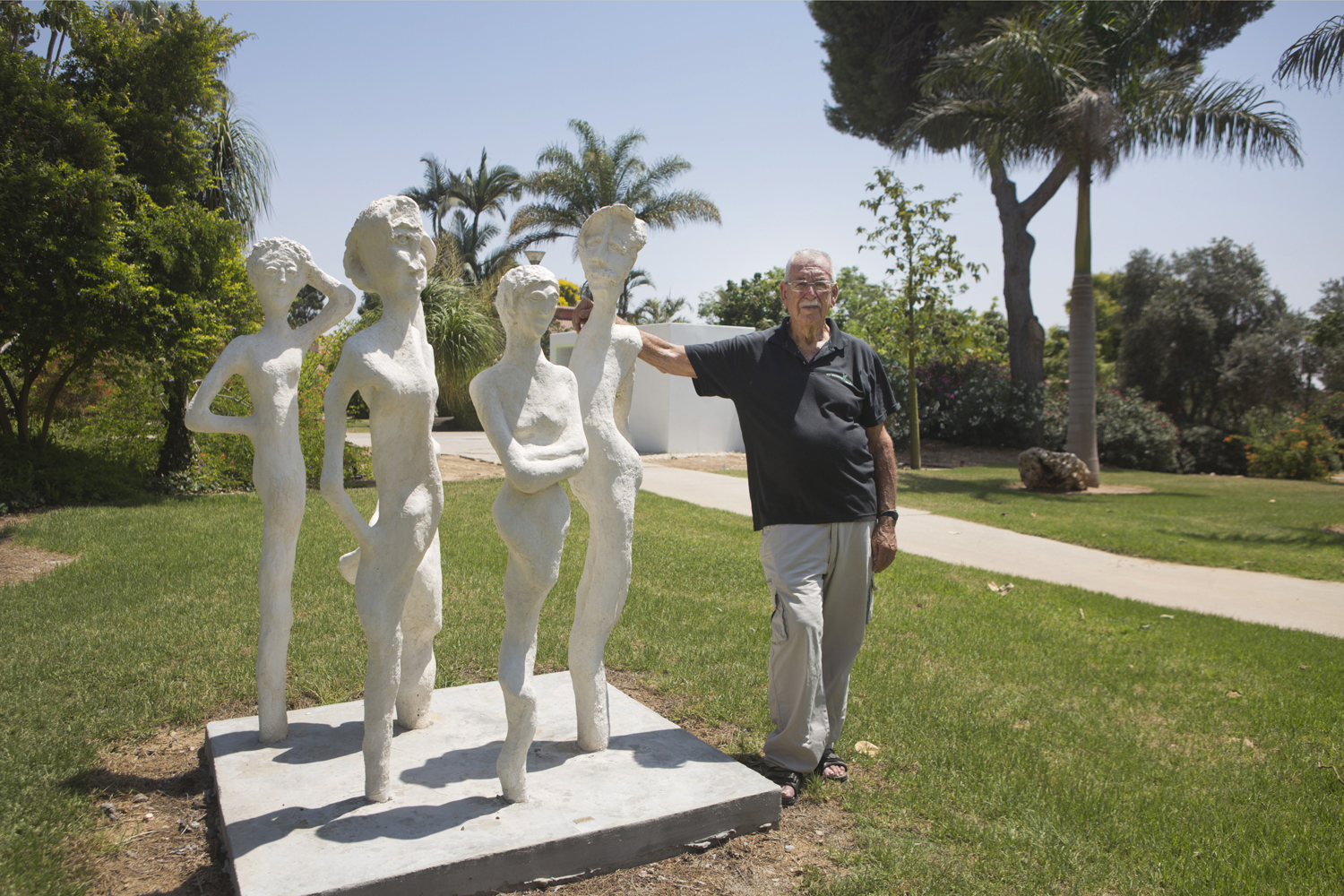 Yankale Cohen with a statue of himself and other Nahal Oz founders.

After the 1956 Sinai War, United Nations peacekeepers, including Canadian troops, helped to maintain a peace along the Gaza frontier.

Israel’s occupation of Gaza after the 1967 Six-Day War created a period of greater calm on both sides. Palestinians travelled daily to work in Israeli fields and construction sites; Israelis from Nahal Oz and other border communities shopped in Gaza. Mr. Cohen said his dentist was in Gaza City.

People from Nahal Oz visited Gaza, including Ali al-Muntar, the hill where Samson had carried the gates of Gaza. “From there, we could see right into our kibbutz,” Mr. Cohen said. 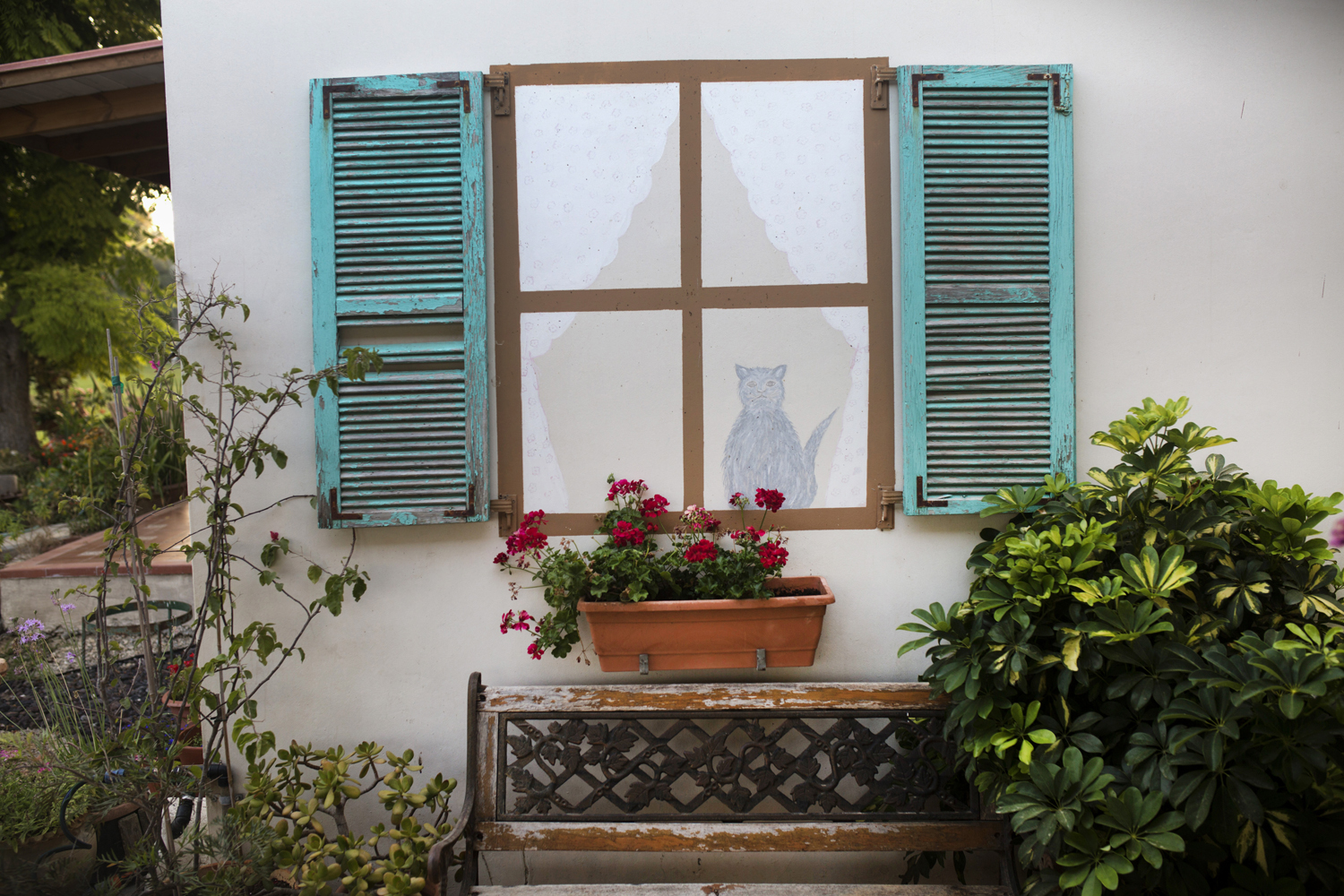 A painted window and cat adorn the outer wall of the Cohens' bomb shelter.

Relations between the two sides grew worse during the first intifada of 1987-93, the second intifada of 2000-05 and Hamas’s takeover of Gaza in 2007. Israeli campaigns in 2008-09 and 2012 against Hamas’s firing of rockets at southern Israel caused a large number of casualties in Gaza and some in Israel.

The 2014 war was the most difficult for Nahal Oz’s residents. Shelling by Hamas and other groups was the heaviest ever. Families with young children were encouraged to take shelter in other communities farther from the frontier. 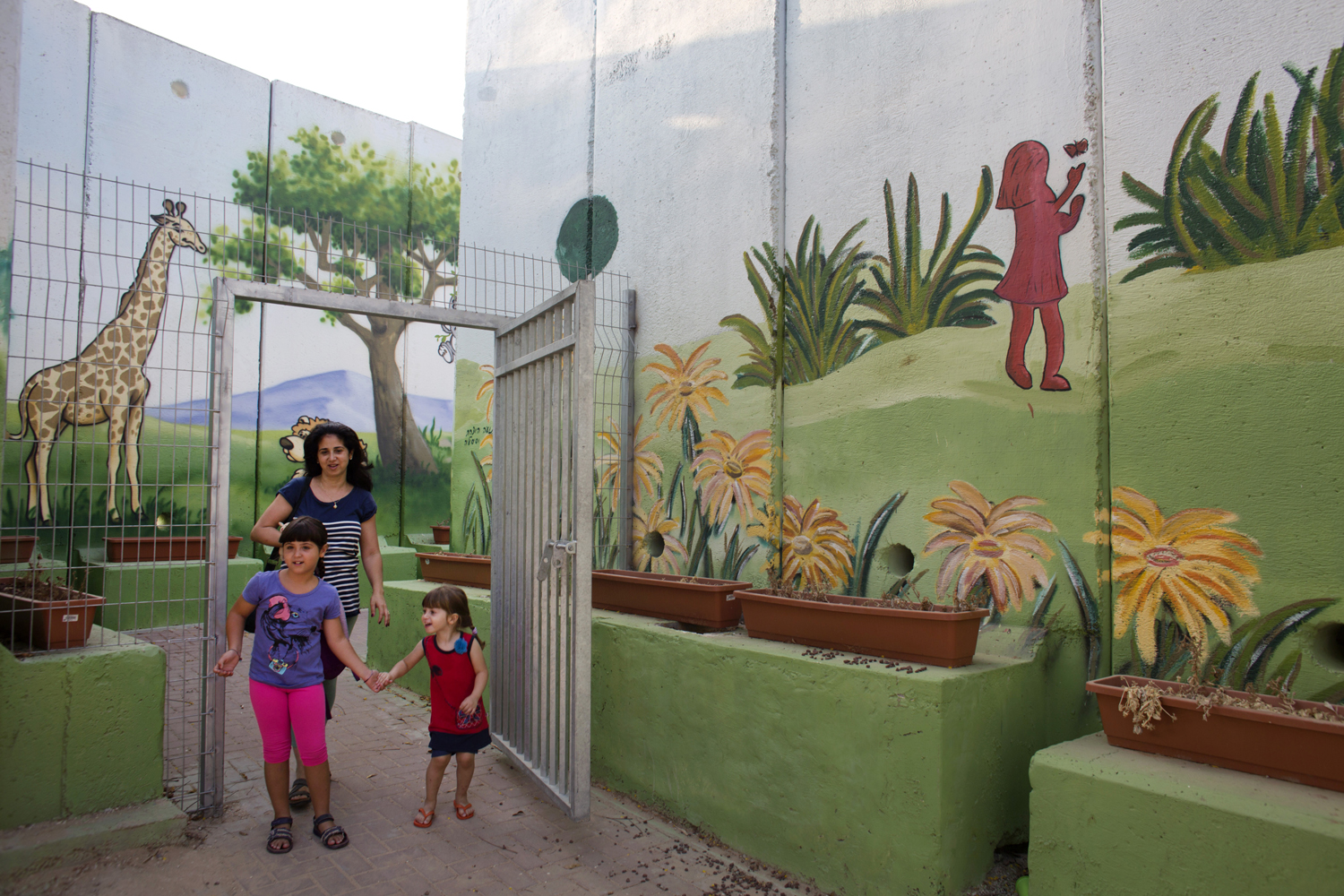 Nahal Oz's kindergarten has been fortified with cement security walls.

The Cohens’ four children, none of whom live on the kibbutz, encouraged their parents to move too. “We refused,” Mr. Cohen said. “We had built this place and wouldn’t be forced out by fear.”

“Besides,” he added, “we wanted the place to look good for when everyone returned [at the end of the war].” 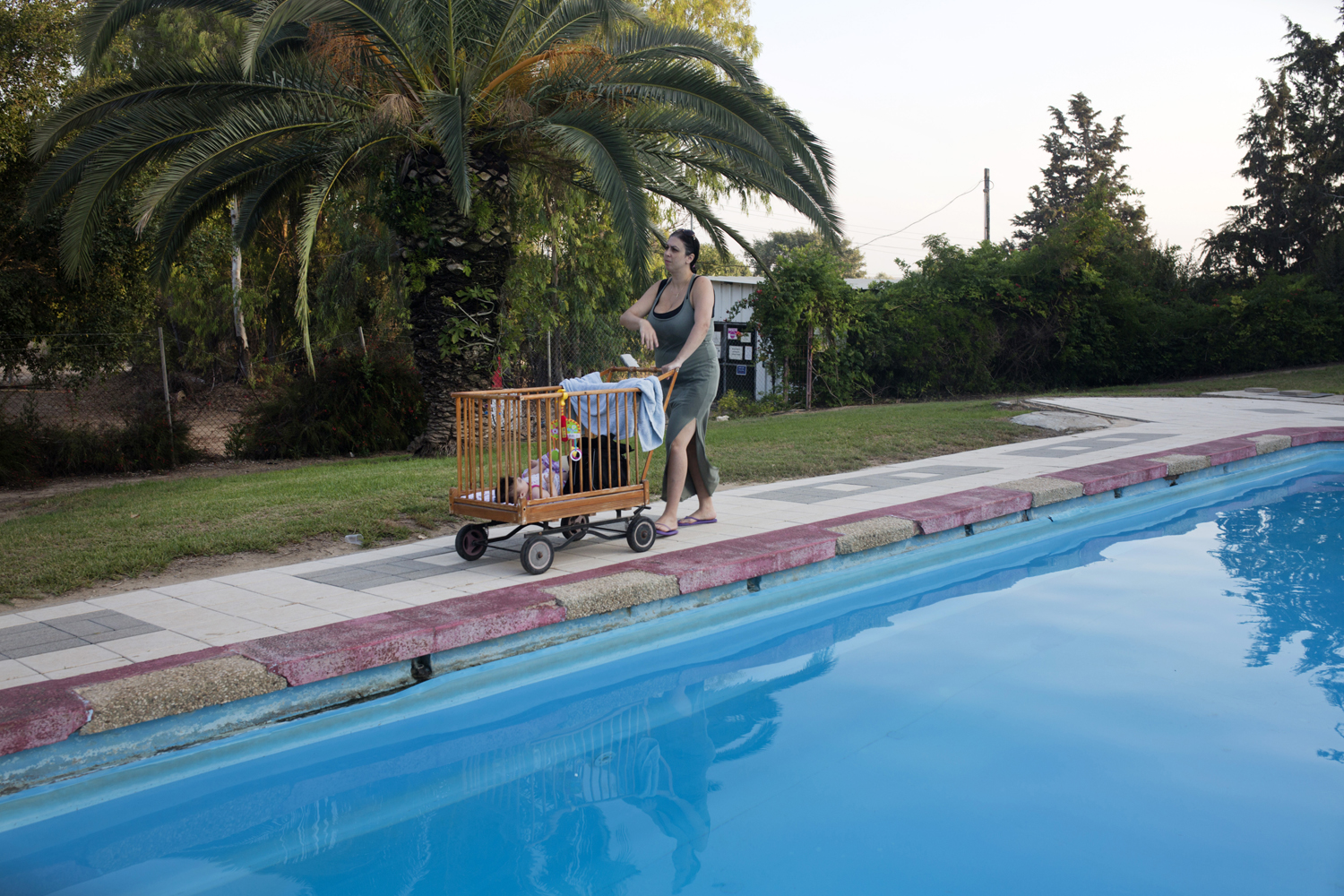 A woman pushes a baby alongside Nahal Oz's swimming pool. 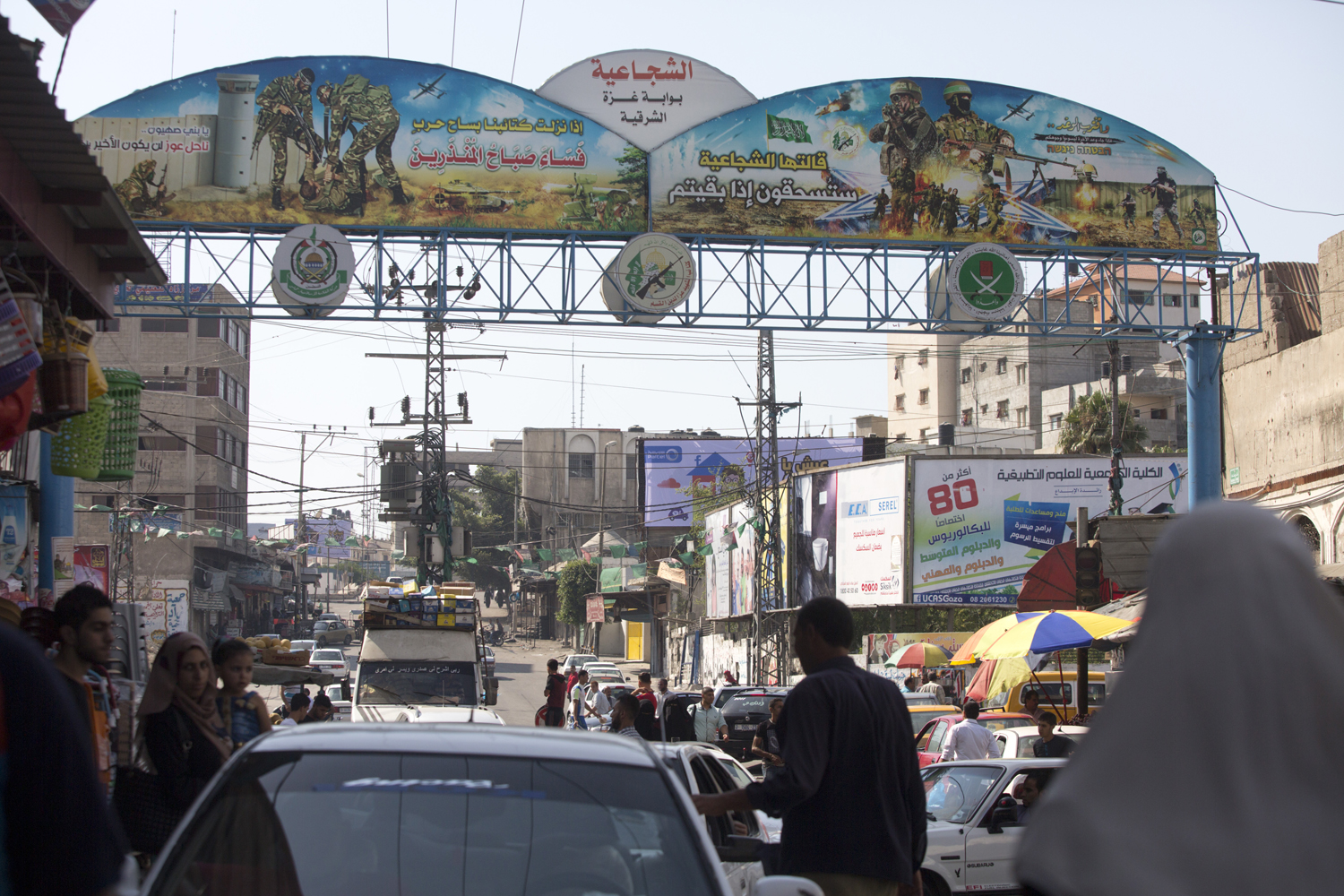 A giant banner in the gateway of Gaza City's eastern Shejaia district shows Hamas militants and, in Arabic in the left section, the words "Nahal Oz won't be the last."

Not everyone returned to Nahal Oz at the war’s end. A four-year-old boy, Daniel Tragerman, was killed when a mortar shell fired from Gaza landed just outside his door. The Tragermans, along with 16 other families, opted to leave the kibbutz. More than the young boy’s death, it was the fear of more Hamas tunnels that drove them away, Mr. Cohen said.

Hamas had used tunnels to bring goods into Gaza from Egypt when Israel closed all ports of entry in 2007, and to kidnap and hold for ransom an Israeli soldier in 2006. They also used them inside Gaza to store weapons, and provide an underground network for Hamas leaders during any conflict.

In 2014, more than a dozen tunnels were found to have been dug under the border with Israel, many of them originating in Shejaia. Four of them were used for raids on Israeli forces at various points along the frontier – the most deadly being the July 28 attack at Nahal Oz. “On July 28, everything changed,” Mr. Cohen said. “The fear of the unknown gripped everyone.”

The successful use of the tunnels to strike fear in their Israeli neighbours delighted Hamas. Today, an overhead banner reassures people entering Shejaia that the deadly tunnel attack on Nahal Oz “won’t be the last.”

The Al Arier family owns land on both sides of the 1949 Armistice Line – most of it, they say, lies within what is now the military camp and kibbutz of Nahal Oz. When fighting broke out in 1948, the family patriarch, Mohamed Al Arier, fled into Gaza behind the safety of the Egyptian forces just a kilometre or two away.

Unable to return to the now-Israeli land, he built a home in Shejaia and raised his family. These days, three of his four sons live in adjoining homes; the fourth moved to the West Bank. His unmarried daughter, Fayza, lives in what little is left of her father’s house. It was heavily damaged by Israeli shelling last year and shot up by Israeli forces who took cover inside it. 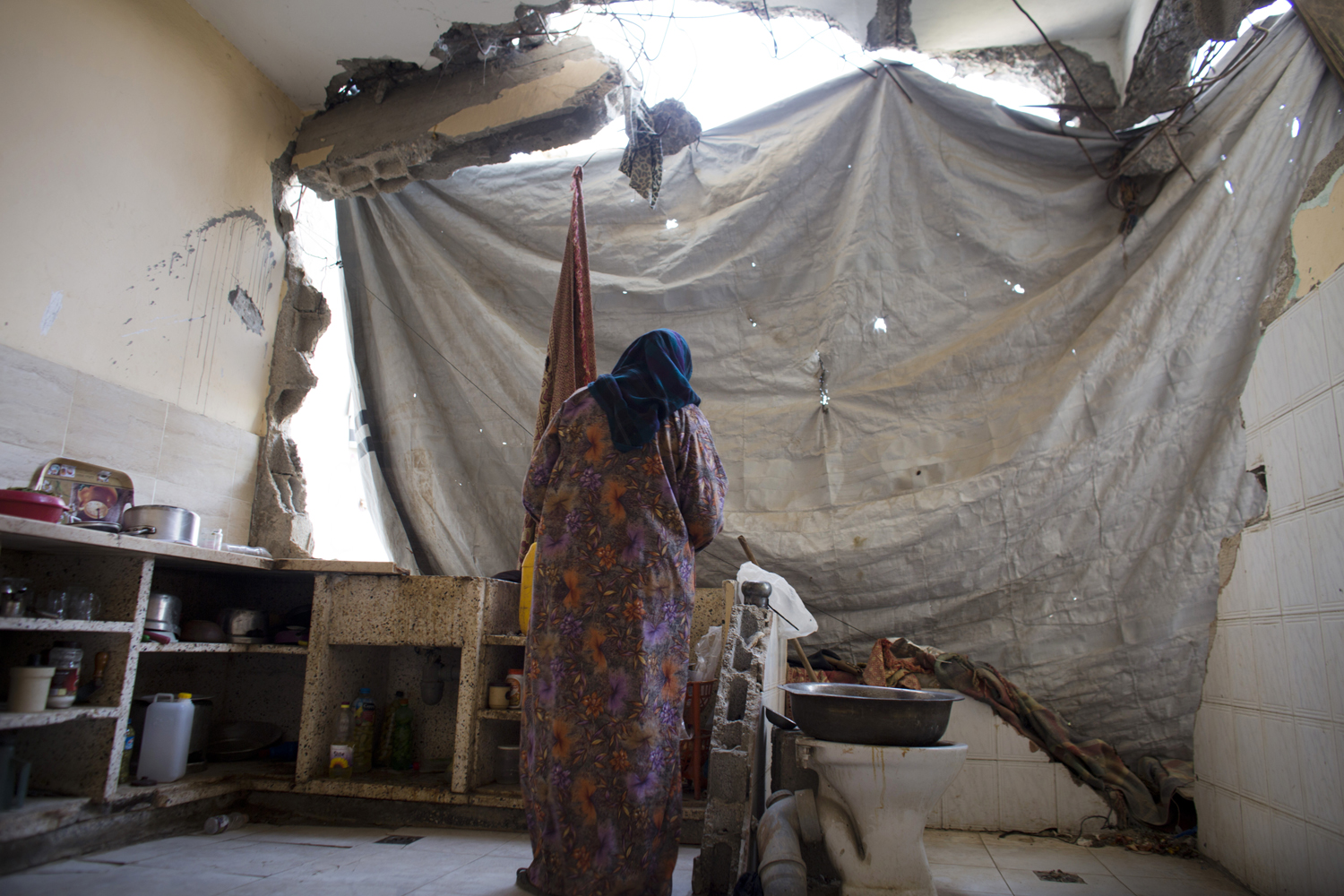 Fayza Al Arier in the damaged kitchen of her father's home.

Since Hamas’s takeover of Gaza in 2007 and Israel’s closing of Gaza’s airport, seaport and border crossings, the economy has been in a tailspin. Apart from growing some vegetables and raising a few camels on their property adjacent to the border with Israel, none of the Al Arier family members has had a job. Khamis, 54, the oldest of Mohamed’s sons, still is listed as an employee of the West Bank-based Palestinian Authority that used to administer things in Gaza, and he continues to collect a monthly paycheque – though someone from Hamas has actually filled the position. 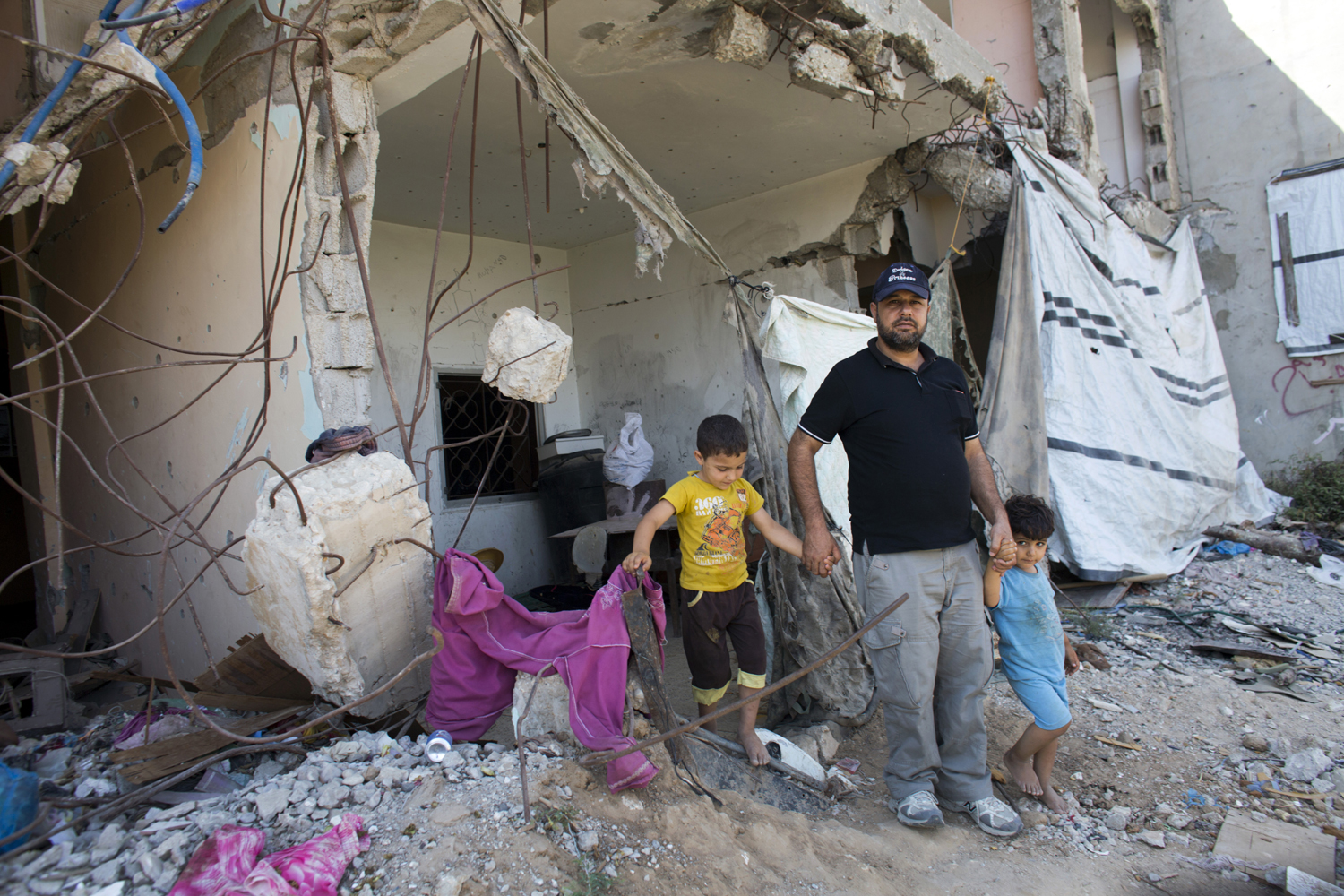 Above and below: Sharef Yousef Al Arier with his children at his father's home. 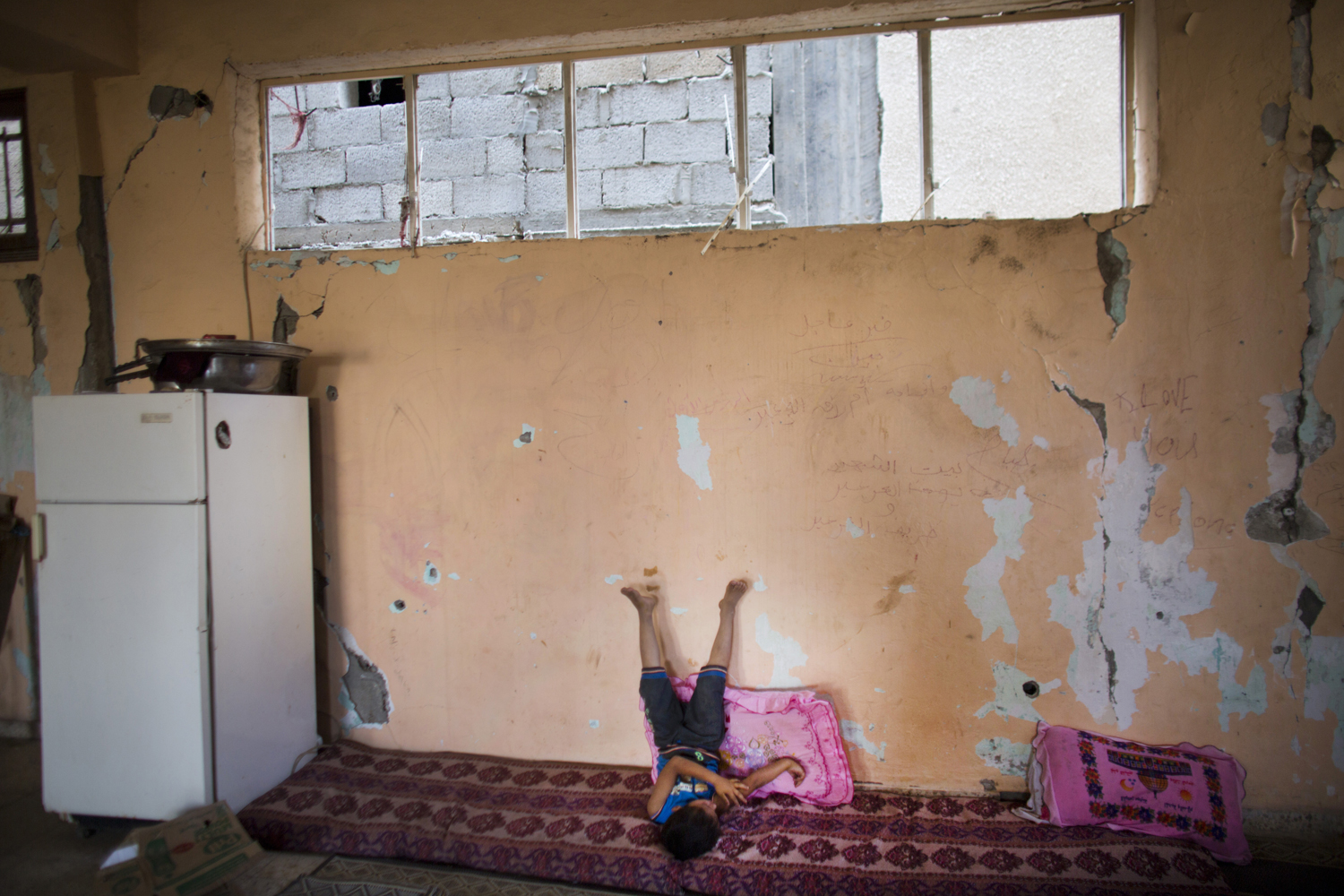 The destruction of the family patriarch’s home in Shejaia makes them thirst for their original land again.

Zarif, 11, and Hadi, 9, collect hay for the camels to eat. Hadi’s father, Nabil, 47, said he named his son for “a martyr killed a few years ago.” What he didn’t say was that the “martyr” was Hadi Nasrallah, the 18-year-old son of the leader of Lebanon’s militant Hezbollah movement, Hassan Nasrallah. That young man was killed in September, 1997, in a firefight with Israeli forces in Lebanon. The Al Ariers appear to be keeping the fight against Israel foremost in the family’s minds. 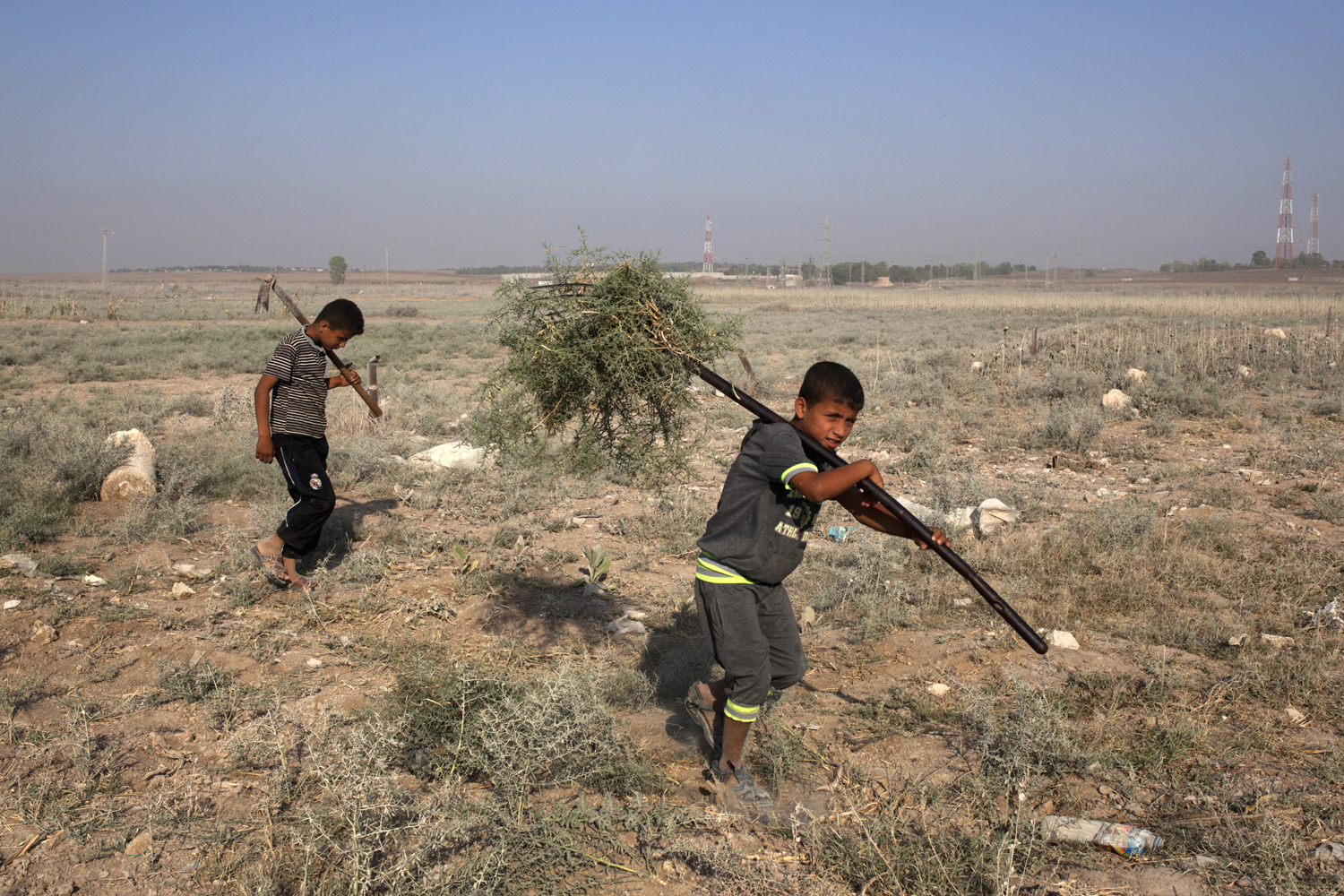 Zarif and Hadi Al Arier work on their family's land.

In Nahal Oz, on the Israeli side, many of the families with children have left the kibbutz. Most of the remaining 200 residents are older: Many of their grown children, like the Cohens’, have elected to move into Tel Aviv or Jerusalem or to move abroad.

To help develop a new generation, the kibbutz has offered low-cost housing to young people fresh out of the military. 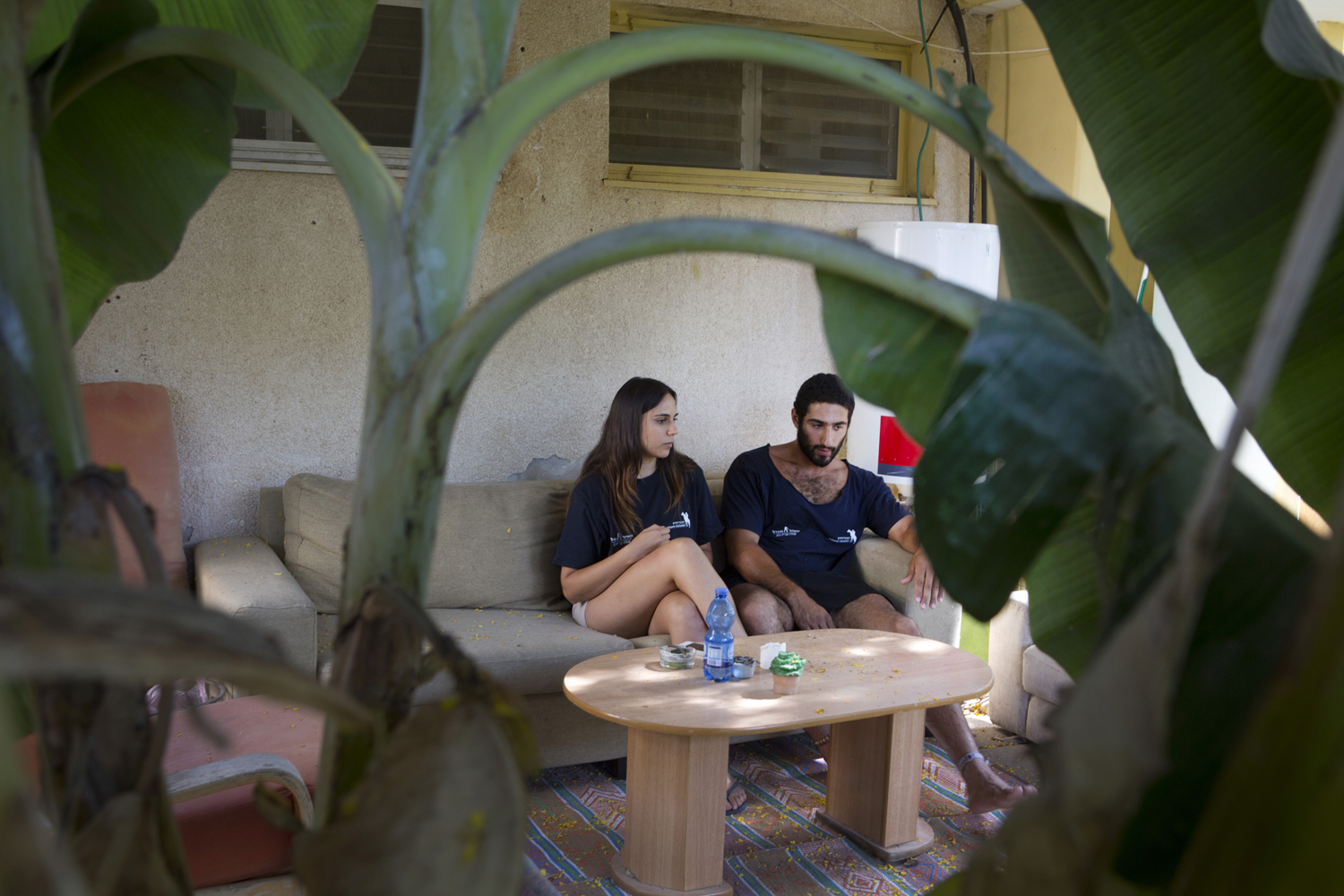 Yuval Levi, 22, was born on the Israeli settlement of Ariel and lived most recently in Modiin, a western-oriented city between Jerusalem and Tel Aviv. She came to Nahal Oz because she craved getting away from mainstream Israeli society, she said. “The sharing, co-operation and intimacy are values that are important to me,” she said, adding that “the danger doesn’t bother me.”

“I run every day around the perimeter of the kibbutz,” she said – a practice that horrifies the Cohens, who have adopted her as one of their own.

Ms. Levi and her colleague Daniel Shimshon, 24, said they chose Nahal Oz because of what it went through in the summer of 2014. They want to help the community recover and to get on with the business of settling the Negev desert area of southern Israel. 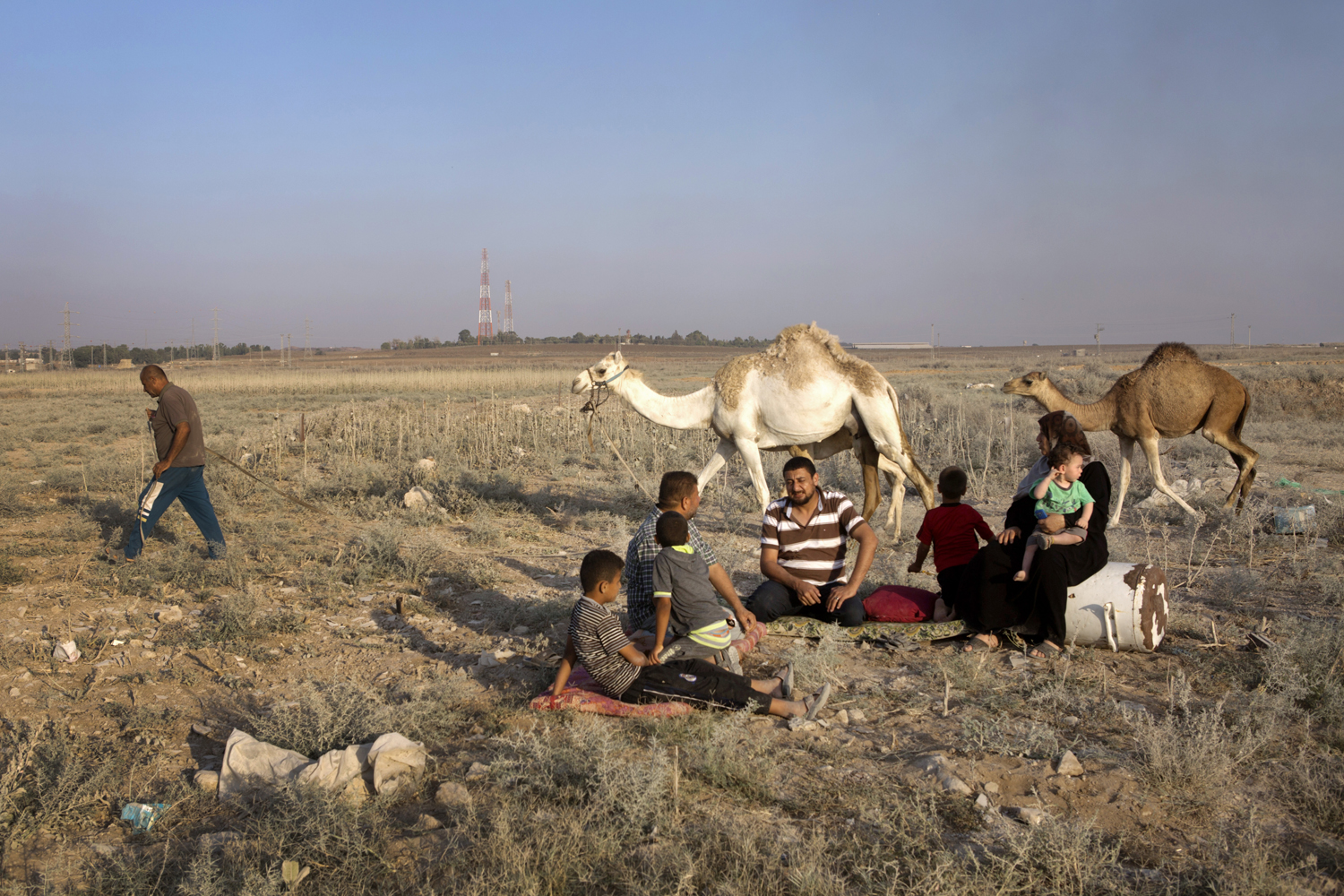 Members of the Al Arier family sit in a field on the outskirts of Shejaia.

Meanwhile, most every evening, the Al Ariers bring their children to the property they own on the Gaza side of the frontier. They play with the camels the family raises and look out over the fields and settlement of Nahal Oz.

“Where’s our land?” the parents asked, and all the children pointed immediately to the kibbutz on the other side.

One gets a very good view of Nahal Oz from the hill called Ali al-Muntar in Shejaia. This is the hill Samson, the powerful biblical Israelite, is said to have climbed carrying the massive gates of Gaza on his shoulder. It is a place that has been respected by Jews, Christians and Muslims for centuries.

Last summer, the mosque that has been atop this hill for 100 years or more was destroyed by Israeli shelling.

Brightcove player
The view from Gaza: Patrick Martin visits the ruins of the mosque on Ali al-Muntar