She is called the "Iron Orchid," a moral celebrity who risked her life standing up to a terrifying military regime and who was honoured by the chairman of the Nobel Peace Prize committee as someone whose very existence "gives us confidence and faith in the power of good."

But as Aung San Suu Kyi faces an election year that could hand her the leadership of a country she has long sought to change, she has maintained her unwillingness to condemn Myanmar's human-rights abuses against Muslims – a politically safe stance at home – by playing down her role as the conscience of her nation.

"I've always been a politician. I've never said that I was a moral organization or anything like that," she told The Globe and Mail in an interview Friday in the Myanmar capital.

Ms. Suu Kyi has faced withering disapproval over her unwillingness to offer a strong repudiation of Myanmar's treatment of the Rohingya, a Muslim group the country does not recognize as citizens and which the United Nations has called one of the most persecuted minorities on earth.

Disappointment, particularly in the international community, has been so great some have called for her Nobel prize to be rescinded, while others have accused her of trading her moral standing for calculated politics, since the Rohingya are widely disliked in a country that disparages them as illegal "Bengali" intruders.

About 140,000 Rohingya have been displaced and made to live in often horrific conditions in refugee camps. A far smaller number of Buddhists, who form the overwhelming majority in Myanmar, have also lost homes.

Ms. Suu Kyi has sought to occupy the middle ground. "The Muslims are a minority" in Rakhine state, where violence continues to plague relations between the two sets of people. "But the Buddhists feel they are a minority in the world, that there's a huge Muslim world community which is against their Rakhine Buddhists. And it's a perception – but in matters like that, perceptions are as effective as facts," she said Friday, speaking in a meeting room of the Rule of Law and Tranquillity Committee, which she chairs, in the country's sprawling parliamentary complex.

She said she doesn't believe good will come out of condemning either side.

Ms. Suu Kyi, 69, faces a critical year, one of the most important in a life spent seeking democracy for her country, as she seeks to lead her National League for Democracy party to victory a second time. A first electoral triumph in 1990 was overturned by the country's military; her party did not participate in the heavily flawed 2010 elections, but won 43 out of 45 seats in 2012 by-elections. Barring another military intervention, national elections in Myanmar expected in late October or early November represent the first chance she has to lead the country.

Under the country's constitution, the newly elected legislators would choose the president. Ms. Suu Kyi, whose husband was British and whose children hold British passports, appears unlikely to get that post: The constitution, written by the military, bars it to anyone with a foreign spouse or children. The constitution also assigns 25 per cent of parliamentary seats to the military, which has used that position to block efforts at reform.

Ms. Suu Kyi suggested that a strong vote for her party would give the military little choice. "If the majority of the people are intent enough on bringing about change, change does come about," she said. "I would like our military to look at the welfare of the country as a whole, and not just look at what they want, and what they think the situation should be."

The military, she added, is not "impervious to public opinion. And people change. Institutions change."

She refused, however, to say whether another person has been selected to serve as president if she is barred from that seat. "I'm not going to talk about what we are going to do if and when. These we leave until the when comes," she said.

Still she offered a gloomy assessment of the state of reform in Myanmar, where the military-dominated leadership has shown worrying signs of stepping back on the freedoms it suddenly allowed in the past five years. In recent months, authorities used a state secrets law to imprison journalists, jailed a bar owner under outmoded blasphemy rules and moved violently against student protesters.

"I don't think the reforms are all that strong to begin with, and I think this is beginning to become more obvious," Ms. Suu Kyi said. "You can call it backsliding. I think it's just not making progress."

Ms. Suu Kyi, who was awarded Canadian citizenship in 2007, also voiced worry that President Thein Sein, a former general, would not allow elections to take place this year. "We have been concerned because the President said last year that the peace process should be given precedence over the elections. Does that mean if they think that the peace process justifies it, they can push off the elections?" she asked.

She said, too, that there is "genuine anxiety on the part of the people that the government and the military might not honour the results of the 2015 elections if the NLD wins."

Partisan politics colour her concern, which is set against repeated assurances by Thein Sein's government that it is committed to running a free and fair election this year.

The government is building up a long list of achievements, including a draft ceasefire agreement this week that could pave the way to ending more than six decades of civil war. Under Thein Sein, Myanmar has also experience some of the world's fastest economic growth.

But Ms. Suu Kyi dismissed the accomplishments of her political rival, saying she isn't happy with some parts of the ceasefire text, and she positioned herself and her party as the change Myanmar needs. "To begin with, we can always run on anti-corruption," she said. "We are a very clean party. Poor, but clean. … That's a first step toward good government." 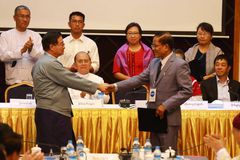