Canada's Foreign Minister says a Canadian journalist who has been a prisoner in Egypt for more than a year is about to be released and sources in Cairo say they expect Mohamed Fahmy to be on a plane to Canada by midweek.

Hopes for the deportation of Mr. Fahmy, the Cairo bureau chief for Al Jazeera's English network who until recently held both Canadian and Egyptian citizenships, were raised when Australian reporter Peter Greste was released and deported on Sunday.

The two men and Egyptian producer Baher Mohamed were convicted last year on charges that they had aided and funded the banned Muslim Brotherhood, a political party overthrown in a military coup in 2013.

Foreign Minister John Baird said on Monday that the release of Mr. Fahmy was imminent but the Minister's staff refused to elaborate when asked what that means. Egyptian officials have told Mr. Fahmy's family they expect him to be freed by midweek, possibly Wednesday.

A Canadian government source said consular officials in Cairo met with the Egyptians on Monday to discuss how soon the release of Mr. Fahmy would follow that of Mr. Greste. The source told The Globe and Mail on Monday that all indicators are positive for Mr. Fahmy's return to Canada and it is his dual citizenship that is causing the delay.

But Mr. Fahmy's family says he has already renounced his Egyptian citizenship.

Mr. Fahmy applied before Christmas to be deported under the decree issued by Egypt's President, Abdel Fattah el-Sissi, which allows the President to expel foreign nationals who have been convicted in Egypt and are being held in an Egyptian prison. For Mr. Fahmy to be deported through that process, he had to agree to give up being Egyptian.

Marwa Omara, Mr. Fahmy's fiancée, told The Canadian Press it was a very difficult decision for him because he is a "proud Egyptian who comes from a family of military servicemen."

Mr. Greste, meanwhile, said he is relieved to finally be free after spending 400 days in a Cairo prison, but he is worried about leaving Mr. Fahmy and Mr. Mohamed.

"I feel incredible angst about my colleagues, leaving them behind," Mr. Greste told Al Jazeera on Monday. "Amidst all this relief, I still feel a sense of concern and worry. If it's appropriate for me to be free, it's right for all of them to be freed."

Mr. Greste said he learned he was being deported just an hour before he was let out of prison. Given the short notice that was provided by the Egyptians about the release of Mr. Greste, neither Mr. Fahmy's family, nor the Canadian embassy in Cairo, are likely to get much advance warning if Mr. Fahmy is also let go.

Mr. Fahmy's lawyer, Amal Clooney, was in touch with the Fahmy family after Mr. Greste was allowed to leave Egypt.

"We are all delighted that Peter Greste has been released," Ms. Clooney said Monday in a statement. "As Mr. Fahmy's counsel we are doing all we can to ensure the same outcome for Mr. Fahmy, who has suffered the same injustice."

The case has sparked an international campaign for press freedom and there is some concern on the part of advocates for the three journalists that the release of Mr. Greste and Mr. Fahmy could reduce pressures on the Egyptian government to free Mr. Mohamed, who received a 10-year sentence.

In January, an Egyptian appeals court ordered all three men to be retried but there is no telling how long that process will take or whether it will result in Mr. Mohamed's freedom.

Mr. Fahmy has told his family he is concerned about Mr. Mohamed and is preparing to lobby for the producer's release once he is no longer in prison himself.

"When you spend 400 days in such close proximity with people, you get to know them really well. It was a really difficult moment walking out and leaving the prison, saying goodbye to those guys, not knowing how much longer they will have to put up with this," he told Al Jazeera.

"Baher is one of the most amazing family men I've ever met," he said. "If anyone's suffered out of all of this, he has a wife, and one of his children was born while he was prison."

The Al Jazeera Three: Facts about the imprisoned colleagues
February 1, 2015 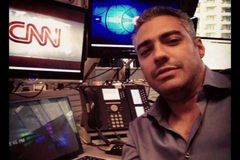 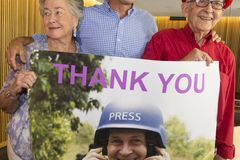