In her victory news conference, Ms. Gillard said the fight in the Labor party had been "ugly" and Australians were fed up with the political brawl, but promised her government would now unite and put voters first, adding she was convinced Labor could win the next election due by mid-2013.

"Today I want to say to Australians... the leadership question is now determined," said Ms. Gillard, who won the vote 71 to 31, ending former foreign minister Rudd's hopes of returning as prime minister before the next election.

"I understand that many Australians will have their doubts that after this fight Labor will come together in a united way. We have come together before and we will do so now," she said.

A Newspoll on Monday showed Labor's primary support had risen to a 12-month high despite the leadership turmoil, with two-party support for the government up two points to 47 per cent compared with 53 per cent for the opposition, down two points.

The poll found primary support for the government had lifted to 35 points, just three points behind the government's vote at the dead-heat 2010 elections.

"I accept fully the verdict of the caucus and I dedicate myself to working fully for her re-election as the prime minister of Australia, and I will do so with my absolute ability dedicated to that task," Mr. Rudd told reporters after the vote.

Ms. Gillard said she would announce a new foreign minister to replace Mr. Rudd in coming days, but may use the opportunity for other ministerial changes and to demote ministers who backed Mr. Rudd.

She also said she was not planning any major policy changes to the unpopular carbon tax, due to start on July 1, the same day as a new 30 per cent tax on iron ore and coal mines.

Mr. Rudd's supporters earlier put Ms. Gillard on notice that whatever the leadership result, she must lift the government's standing in opinion polls or she could still be dumped.

To do so, Ms. Gillard needs to now deliver a budget in May that wins over voters, show the carbon and mining taxes will not cost jobs and damage the economy, and sell the good news story of the Australian economy, the best performing in the developed world.

But political analysts remain divided on whether Ms. Gillard can achieve the political stability needed to be re-elected.

Sydney University political analyst Peter Chen said he believed Mr. Rudd could still recover from Monday's vote and return as a leadership rival, as he has not ruled out being drafted back to the prime ministership if Ms. Gillard falters.

"This isn't the smack-down victory for Gillard that means this issue will go away. She will get a few weeks' grace before this issue boils back into the public eye again," Mr. Chen told Reuters. "This issue is going to continue to dog the government. It will come to a head again before the end of the year."

Ms. Gillard called the leadership vote to stamp her authority over the governing Labor Party after Mr. Rudd suddenly quit as foreign minister in Washington last week after weeks of mounting infighting between the two camps.

But former Labor Party leader Mark Latham said the vote was an overwhelming vote of support for Ms. Gillard, and Mr. Rudd would be unable to mount a second challenge on the back of the result.

"There's no way Rudd, on those numbers, can come back to the leadership," Mr. Latham told Sky television. 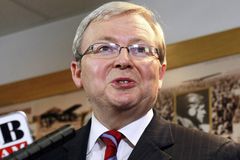