Austrian daredevil Felix Baumgartner became the first man to break the sound barrier in a record-shattering freefall jump from the edge of space Sunday, organizers said.

The 43-year-old jumped from a capsule more than 39 kilometers above the Earth, reaching a speed of 1,136 kilometres per hour before opening his red and white parachute and floating down to the New Mexico desert.

Mission control erupted in cheers as Mr. Baumgartner made a near-perfect jump from the capsule hoisted aloft by a giant helium-filled balloon to an altitude of 39,044 meters, even higher than expected.

"I think 20 tonnes have fallen from my shoulders. I prepared for this for seven years," Mr. Baumgartner told German-language ServusTV in Austria, in his first interview after the leap.

Referring to a helmet problem that nearly forced him to abort at the last minute, Mr. Baumgartner said: "Even on a day like this when you start so well, then there's a little glitch.

"And you think you'll have to abort -- what if you've prepared everything and it fails on a visor problem. But I finally decided to jump. And it was the right decision."

Shortly before jumping, in footage beamed live around the world -- on a crackly radio link recalling Neil Armstrong's first words on the Moon -- he had said: "Sometimes you have [go] up really high to [realize] how small you are."

The Austrian took more than two hours to get up to the jump altitude. Mr. Baumgartner had already broken one record, before he even jumped: the previous highest altitude for a manned balloon flight was 34,667 metres, set in 1961.

Mr. Baumgartner had been due to jump from 36,576 metres, but the balloon went higher than expected, to more than 38 kilometres.

One of the first people to congratulate him was Austrian President Heinz Fischer.

"I warmly congratulate Felix Baumgartner on this great success, which was achieved with courage and perseverance and is finding worldwide attention. Austria is proud of your accomplishment," he wrote on his Facebook page.

The Red Bull Stratos mission was the second attempt for the skydiver after an initial bid Tuesday was aborted at the last minute due to winds.

The biggest risk Baumgartner faced was spinning out of control, which could have exerted g-force and made him lose consciousness. A controlled dive from the capsule was essential, putting him in a head-down position to increase speed.

More gruesomely, the skydiver's blood could have boiled if there were the slightest tear or crack in his pressurized spacesuit-like outfit, due to instant depressurization at the extreme altitude.

Temperatures of -68C could also have had unpredictable consequences if his suit somehow failed.

The leap went off flawlessly, though there was a minor problem as the capsule ascended: a heater failed on Mr. Baumgartner's helmet faceplate, meaning it was becoming fogged up when he exhaled.

After considering the options, Mr. Baumgartner and his entourage decided to go ahead with the jump.

Mr. Baumgartner's 100-strong backup team includes retired U.S. Air Force colonel Joe Kittinger, who had held one of the records the Austrian was trying to break: the highest freefall jump, which Mr. Kittinger made from 31,333 metres in 1960.

"Let the guardian angel take care of you," Mr. Kittinger told Mr. Baumgartner shortly before he jumped into the void.

The giant balloon -- which holds 859,000 cubic meters of helium -- is needed to carry the Red Bull Stratos capsule of nearly 1.3 tons to the stratosphere.

It is made of near transparent polyethylene strips even thinner than a dry cleaner bag, which are heat-sealed together. Very thin material is necessary to save weight.

The skydiver has been training for five years for the jump. He holds several previous records, notably with spectacular BASE jumps from the Petronas Towers in Kuala Lumpur and the Christ the Redeemer statue in Rio de Janeiro, Brazil.

Speaking before the launch, Mr. Baumgartner said he would be proud to be the first person to break the speed of sound in freefall.

"But really, I know that part of this entire experience will help make the next pressure suit safer for space tourists and aviators," the jumper said.

His launch coincided with the 65th anniversary of American pilot Chuck Yeager breaking the speed of sound. 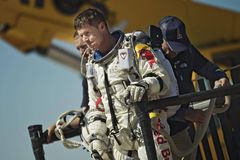 Skydiving as the Queen with the world watching
August 2, 2012 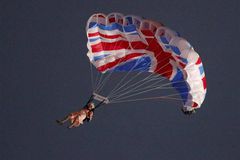 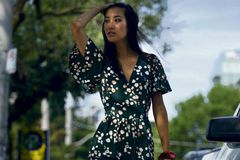 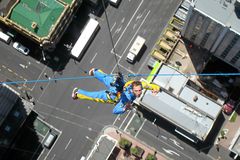