When Priyanka Roychoudhury arrived at one of India's most prestigious colleges in New Delhi last year, she expected to find herself among other young women brimming with ideas and ambition.

Instead, she found a whole lot of smart women looking forward to getting married.

Most, like Ms. Roychoudhury, were top scholars – she scored 97.4 per cent on her high school-leaving exams – but depressingly few could envision a future where their big brains would be contributing to change in the country, she said.

"They have so much potential and they are not able to follow up on their dreams – it's very disheartening," the petite Ms. Roychoudhury confides with a sigh.

And worse, far from her home in the northeast of India, Ms. Roychoudhury, 18, found herself up against pervasive racial discrimination as an ethnic Assamese. People call out "chinki" to her when she walks down the street, she said, and people from what she calls "mainland India" tell her and fellow students from the tribal north that they aren't really Indians.

A few months ago, she saw a Facebook ad for the G(irls)20 Summit and it clicked – when the application asked her about the biggest challenges for girls and women as innovators in her country, Ms. Roychoudhury sent an impassioned response, asking how girls from her part of the country could contribute to India's future when they face discrimination at every turn.

Her clear-eyed assessment of the underbelly to India's growth story won her a ticket to the summit in Mexico, where she hopes to learn how young women from other parts of the world are fighting to taking their big ideas into the global economy.

With flawless English and prosperous, liberal parents, Ms. Roychoudhury has, on paper, more going for her than girls from almost anywhere in the developing world. But the reality of Indian society, she says, is that although the barriers are hard to see, they are as big as they ever were.

India's female work force participation rate is one of the lowest in the world – just 13 per cent of women do waged work, according to the World Bank. (When rural women, who do much of the unwaged agricultural labour, are included in the count, the figure is about 25 per cent, but that farm labour is rarely coupled with the rights to land or to decide on the use of earnings.) The comparable figure in China is 46 per cent, and in the developed world it is 60 per cent; India's rate matches the most conservative states of the Persian Gulf.

That work force participation rate has remained unchanged for more than 20 years, even as the economy has posted growth rates near 10 per cent for much of that time.

All the same, she knows why her fellow students' parents don't like the idea of them working: A woman outside her home without a male escort is considered fair game for sexual harassment and worse.

"You hear about it every day in the newspapers," she said. Delhi in recent months has seen a spate of abductions and gang rapes of young working women. Pushed to take action, police responded by suggesting an ordinance that would bar women from working at night.

Ms. Roychoudhury isn't impressed. "They're just segregating," she said. "You need to attack the problem and not just try to escape from it."

While she is studying economics, she says teaching is her first love. She has organized fellow students at her Delhi University college to help provide extra classes to struggling students at government schools in poor areas of the city, and hopes when she graduates to found a charity that will use innovative methods to bring education to street children.

But as well as literacy, she hopes to pass on new ideas about what women can do. "I want to teach girls – and boys, too." 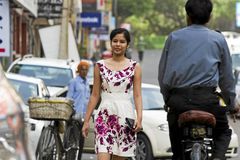