President Barack Obama denounced Islamic State militants and vowed to protect Americans but made no specific threat to take further military action against the jihadis that executed journalist James Foley, a U.S. citizen, in a grisly video.

"The United States of America will do what we must to protect our people," the president said while vacationing on the island of Martha's Vineyard. But he offered no specifics and made no mention of Islamic State's threat to kill another U.S. citizen unless Mr. Obama called off the air strikes against Islamic State militants in Iraq.

(Who are the Islamic State? Get caught up with The Globe's primer)

Mr. Obama called for an international effort to crush Islamic State. "A group like ISIL has no place in the 21st century," he said, referring to the Sunni extremists who have seized parts of Syria and Iraq.

The president, who sent U.S. warplanes back into action in Iraq, gave no indication that he would widen the air war to strike Islamic State positions in Syria.

He said the killing of Mr. Foley was "an act of violence that shocks the conscience of the entire world," and said he had spoken to the journalist's family.

Islamic State said Mr. Foley was killed as retaliation for air strikes ordered by Mr. Obama against the rapidly advancing militants in Iraq.

Moments before he is killed in the video, Mr. Foley deplores the U.S. air strikes. He is shown shaven-headed and kneeling in a barren desert location wearing a bright orange tunic with a masked, black-clad executioner standing beside him. He urges his family to reject any compensation from the U.S. government and asks his brother John, currently serving in the U.S. Air Force, to consider the military's role.

"I died that day, John. When your colleagues dropped that bomb on those people, they signed my death certificate," Mr. Foley, a journalist captured two years ago in Syria, said in a strong, clear voice. "I guess, all in all, I wish I wasn't American," he adds.

The kneeling Mr. Foley, with his knife-wielding executioner by his side, delivers what seems to be a prepared statement with a chilling message. "I call on my friends, family and loved ones to rise up against my real killers, the U.S. government, for what will happen to me is only a result of their complacency and criminality," he said.

In English and Arabic, the video opens with the words: "Obama authorizes military operations against the Islamic State effectively placing America upon a slippery slope towards a new war front against Muslims."

Titled "A Message to America," the video warns Mr. Obama that the Islamic State would strike back if the bombing campaign continued.

"Today your military air force is attacking us daily in Iraq. Your strikes have caused casualties amongst Muslims. You are no longer fighting an insurgency. We are an Islamic army and a state that has been accepted by a large number of Muslims worldwide," the video says.

After U.S. warplanes pounded militant positions and vehicles around the Mosul Dam, providing air support that allowed Kurdish forces to retake the area, Mr. Obama told Americans that the new air campaign in Iraq will "take time," adding: "There are going to be many challenges ahead." More than 70 air strikes are believed to have killed scores, perhaps hundreds, of Islamic State militants.

The President must weigh the costs of continuing air strikes, with execution threats now hanging over the heads of other foreigners held by jihadi forces, which control a large swath of eastern Syrian and northern and western Iraq.

Mr. Foley's family confirmed his death. "He gave his life trying to expose the world to the suffering of the Syrian people," said a statement from his mother, Diane Foley. She urged the militants not to execute anyone else. "Like Jim, they are innocents. They have no control over American government policy in Iraq, Syria or anywhere in the world."

Mr. Foley, a freelance journalist, was seized in northern Syria in November, 2012, while on assignment for GlobalPost, an online news organization, and Agence France-Presse.

At the end of the video, after an image of a severed head lying on a body, another American journalist, Steven Sotloff, is shown along with a warning that he will be the next one killed unless the air strikes end. Mr. Sotloff was seized a year ago close to the Syrian-Turkish border.

"The life of this American citizen, Obama, depends on your next decision," the masked executioner says, speaking English with a British accent.

More than 20 journalists are missing – believed held captive – in Syria, according to the Committee to Protect Journalists. Some of the names and nationalities remain undisclosed and it is not clear how many are U.S. citizens.

Opinion
Obama learns it can be stupider to do nothing
August 14, 2014

Opinion
Canada must be more than an observer in Iraq
August 14, 2014 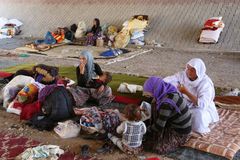 Opinion
No Canadian boots on the ground
August 19, 2014 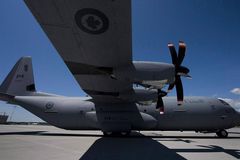