Win, win, win. Tuesday's carefully staged mutual-admiration event between former First Lady Hillary Clinton, the presumptive Democratic nominee aiming to return to the White House as president, and Bernie Sanders, the self-styled socialist whose populist insurgency inspired a movement fed up with the ruling elites, amounts to a win for Ms. Clinton, Mr. Sanders and their Democratic party.

A win for Hillary

After a protracted but not especially bitter campaign – certainly not as nasty as the Republicans or when she lost to Barack Obama eight years ago – Ms. Clinton can bask in the glow of Senator Sanders's unequivocal and only slightly belated endorsement.

Getting the endorsement, some five weeks after she locked up the nomination, required some mostly symbolic shifting to the left by Ms. Clinton as she seeks to woo the legion of young well-educated men and women who flocked to Mr. Sanders's surprisingly effective insurgency.

Ms. Clinton embraced a package of Mr. Sanders's campaign promises; backing a $15-minimum wage, broader Obamacare coverage, and federal funding to cut college costs. None of them can be delivered without Congress and thus Ms. Clinton promised only her political support and nothing that could come back to haunt her.

By contrast – and despite her expedient shift against trade deals during the primaries – Ms. Clinton didn't budge on Mr. Sanders's demand that she formally oppose the controversial Trans-Pacific Partnership. And she will be free, if she wins, to flip-flop again.

A win for Bernie

In just over a year, Mr. Sanders has gone from a maverick independent little known beyond Vermont and the Capitol, where he perched far out on the left-most limb of American politics, to a widely respected household name whose honesty, decency, clean campaigning and ability to play big-league politics without relying on deep-pocketed donors made him the most widely respected presidential contender even among those aghast at his social democratic leanings.

The one-time "Red Mayor of Burlington" has forced the Democratic Party to re-examine its soul and proved that inspiring political engagement among tens of millions doesn't require selling out to lobbyists and special interests. "Thanks to the millions of people across the country who got involved in the political process – many for the first time – we now have the most progressive platform in the history of the Democratic Party," Mr. Sanders said as he prepared to bow out and back Ms. Clinton.

But Mr. Sanders's victory goes far beyond forcing the inclusion of some of his pet policies into the party's platform. If Ms. Clinton wins – and especially if Mr. Sanders steps up, actively campaigns and helps deliver those key blocks of young, well-educated Democrats with whom doubts about Ms. Clinton's integrity are strongest – then he can expect a reward.

It almost certainly won't be a cabinet post, as Mr. Obama gave Ms. Clinton, but if the Democrats retain control of the Senate, then Mr. Sanders may have his pick of key positions.

A win for the Democratic Party

With the Republican Party heading into its convention next week riven by bitter splits and a last-ditch effort to deny Donald Trump the nomination by rewriting the rules to free delegates even on the first ballot, the Democratic Party seems calm, collected, and reasonable by comparison.

Democrats are rebuilding party unity, headed for a celebratory convention, campaign coffers are bulging and look well set for the battle after Labour Day. It's the way the two-party system is supposed to work. Eight years ago, also in New Hampshire, in the aptly named hamlet of Unity, the defeated Ms. Clinton said of Mr. Obama: "He'll work for you, he'll fight for you, and he'll stand up for you every single day in the White House," and urged her disappointed faithful to back her rival.

In turn, Mr. Obama asked former president Bill Clinton to formally nominate him at the 2012 Democratic National Convention as part of the political theatre of unifying the party after the bruises and ill will of the primaries. Both Clintons then campaigned hard for Mr. Obama.

A similar sort of show of unity, followed by perhaps the most active campaigning in more than a century by a sitting president on behalf of a would-be successor that could cement his legacy, is planned for the fall. "I can tell you this, Hillary Clinton has been tested," Mr. Obama said in a joint appearance earlier this month. "There has never been any man or woman more qualified for this office."

That's the message the party wants Mr. Sanders to deliver to his faithful. They don't have to like Ms. Clinton, or even trust her. They just have to like and trust her more than Mr. Trump and go to the polls to prove it. 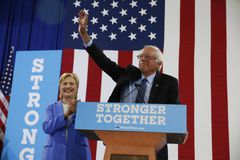 Between Clinton and Trump, Americans dissatisfied with choice Subscriber content
May 16, 2018 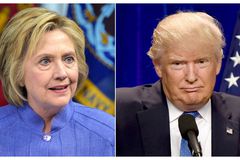