The killing of two more African-Americans by police in separate shootings in less than 48 hours may force the Black Lives Matter movement – and the widespread fear among minorities that they are fodder for trigger-happy police – onto this year's presidential campaign agenda.

But it will take more than graphic videos of young black men bleeding to death while the officers who killed them look on and horrified witnesses cry and scream in anguish.

Repeated mass murders by the deranged or wannabe Islamic extremists wielding assault rifles has so far failed to turn gun control into a vote-shifting issue.

But activists insist they are determined to disrupt both the Republican and Democratic conventions later this month if that's what it takes to get the presidential hopefuls to pay attention to the ongoing spate of high-profile killings of black men by police.

The polarized reality of American politics, however, makes it unlikely that Black Lives Matter will have much impact on the vote in November. Hillary Clinton, the presumptive Democratic presidential nominee, is expected to get the overwhelming majority of the African-American vote – perhaps even more than the 80-per-cent support she received in the primaries.

Meanwhile, Donald Trump, her Republican rival, may do ever worse than previous Republicans among minority voters. Long before the latest killings, he had antagonized many African-Americans by accusing Black Lives Matter activists of promoting "hate." He said they were "looking for trouble," and when several young African-American protesters interrupted one of his rallies this spring, he led an overwhelmingly white crowd in shouting them down. "All lives matter," he yelled and the crowd roared in response. "All lives matter."

"The division and divisiveness in this country is unbelievable," Mr. Trump said, adding: "Believe it or not, we are going to unify this country."

Few African-Americans seem inclined to see Mr. Trump as a unifying force. But black activists are also warning Ms. Clinton that she had better not take the African-American vote for granted.

"She will not be able to govern without a coalition of people of colour," said DeRay Mckesson, a Black Lives Matter leader and prominent rights activist. He warned that protesters will disrupt the Democratic National Convention in Philadelphia unless Ms. Clinton takes the BLM campaign seriously.

That warning came before the latest killings but after former president Bill Clinton got into a nasty shouting match with black activists over the get-tough-on-crime policies he championed, which put millions of young black people in jail for minor drug offences.

But Mr. Mckesson's threat is that African-Americans may not vote, rather than they will back Mr. Trump. "This is an election potentially between a candidate that people are rightfully really concerned about, and a candidate that is evil," he said.

For the Clinton campaign, the cold political calculus will be to mount a sufficiently pro-minority campaign that doesn't alienate white voters.

Mr. Mckesson said he pulled no punches when he met Ms. Clinton last fall. "I said, 'Hillary, I worry that you are underestimating how many people plan to sit this out because they are disillusioned.'"

Neither Mr. Trump nor Ms. Clinton made any mention of the latest killings as they campaigned early on Thursday. Both may be waiting to see what the other says so they can attack the response.

President Barack Obama, who has made several emotional but politically ineffective interventions in the wake of high-profile killings of young African-Americans, directly addressed the two killings after he landed in Poland on Thursday where he will attend a NATO summit.

Race relations in America is a subject Mr. Obama long skirted but has increasingly confronted in recent years.

"Trayvon Martin could have been me 35 years ago," the President said after an unarmed African-American teenager returning to his father's home after buying candy to watch a basketball game was gunned down by a self-appointed neighbourhood watchman in Florida three years ago.

Thursday night, in an emotional plea, he urged Americans to find some good, some way to heal the racial rifts that still cleave society. 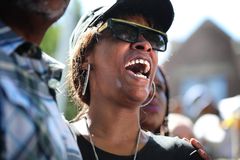 Black Lives Matter demonstrators take to the streets to protest another police shooting of a black man
Gallery
July 7, 2016 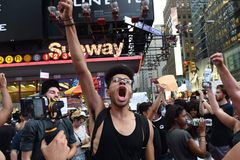