Amid angry demonstrations over the Confederate flag last weekend, a quiet gesture of human kindness unfolded on the steps to South Carolina's Statehouse: A white man overcome by the sweltering heat and wearing a Nazi swastika on his T-shirt was escorted to rest and shelter by a black man wearing an officer's uniform.

That man in the uniform was Leroy Smith, who runs the state Department of Public Safety, and a photo of his Saturday encounter with the man wearing the swastika has gone viral on the Internet.

Smith said Wednesday that he didn't think twice about assisting the ailing man.

"I saw a man who needed some help, and I was going to help him," Smith told The Associated Press in a phone interview.

Smith said the man in the photo was actually the second demonstrator he helped up the Statehouse steps in the 100-degree heat, as tensions between white supremacists and counter-protesters behind police barricades mounted.

"You could feel the tension in the air as the crowd started to swell," Smith said.

The rally organized by the North Carolina-based Loyal White Knights of the KKK overlapped an earlier rally on the opposite side of the Statehouse organized by a Florida-based group affiliated with the New Black Panther Party.

The dueling rallies came one week after the Confederate flag was removed from Statehouse grounds. The Legislature voted to remove it following the massacre of nine parishioners at a historic black church in Charleston, including the pastor, Sen. Clementa Pinckney. The white man charged with killing them had posed with a Confederate battle flag in online photos.

About 50 people rallied with the KKK, including members of the Detroit-based National Socialist Movement, a neo-Nazi group.

They gave no speeches, but shouted "white power" and racial insults as they walked back and forth behind the barricade waving Confederate flags. Shouting and obscenities escalated between them and the crowd, and officers broke up some fights. Smith monitored the scene as he paced back and forth on the Statehouse steps.

Smith said that's when a protester approached, saying someone needed medical help. Smith and Columbia Fire Chief Aubrey Jenkins, who also is black, responded to a demonstrator overcome by the heat.

The first white demonstrator they helped climb the steps and enter the air-conditioned Statehouse could walk on his own. The second clearly could not, Smith said.

"He was struggling, fatigued, appeared to be lethargic. I knew there was no way he could make it up the steps on his own," Smith said. So Smith coached him up the steps, putting his right hand on his arm and his left arm around his body.

Smith didn't get the man's name, and they had no extended conversation.

"He told me he wasn't from around here. I told him it gets hot in South Carolina," Smith recalled.

Both demonstrators they escorted were treated inside by local emergency workers.

Gov. Nikki Haley's spokesman, Rob Godfrey, was on the Statehouse portico observing when he snapped a cellphone photo of Smith helping the man. He quickly posted it to Twitter, where it has received hundreds of thousands of views. It's also been picked up by news media around the world.

"What Leroy Smith did totally overshadowed what went on at the Statehouse when those from outside South Carolina tried to disrupt a time of healing and unity in our state," he said Wednesday.

Through a spokeswoman, Smith initially fended off requests for an interview. But as dozens of news organizations flooded his office with requests, he relented.

Even so, he sought to credit others who work for his agency. At least one officer was pushed to the ground during the Saturday demonstrations. Fights broke out as officers escorted the protesters from behind the barricades to a nearby parking garage.

"I can't overstate how proud I am of law enforcement officers who put their lives in peril to maintain order," Smith said.

The Associated Press has been unable to find and interview the man wearing the swastika T-shirt.

A spokesman for the National Socialist Movement said the man in the photo, as well as a woman walking up the steps behind him, are members of that organization but he declined to provide their names.

Instead, he reacted angrily, made offensive comments to a reporter and hung up when asked questions about the viral photo. He said he did not want reporters to contact the man or woman.

The group is the largest and most prominent neo-Nazi group in the United States, said Mark Potok, an expert on extremism with the Southern Poverty Law Center.

Smith said, "I've just been overwhelmed" by the response to the photo.

At the time, he said, he didn't think about it. He was just doing his job. But he realizes why the photo attracted so much attention: "There was a KKK rally and a public servant law enforcement officer showed love and compassion in the heat of that." 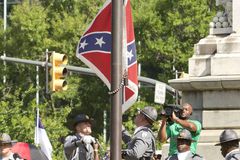 Lowering of Confederate flag marks both an end and a beginning
Subscriber content
July 10, 2015 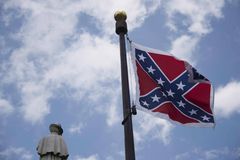