I first met Rebiya Kadeer, the unofficial leader-in-exile of China's Muslim Uyghur population, at Amnesty International's London offices in 2007. At the time, the Uyghurs of China's remote western Xinjiang region – a barren landscape of deserts, jagged peaks and oasis towns roughly 3,000 kilometres from Beijing – were just beginning to come onto the modern world's geopolitical radar, but for all the wrong reasons.

With the endless war on terror raging in Afghanistan next door, China had been able to fuse its grim political repression of a largely peaceful Uyghur populace with the global struggle against radical Islamist terrorism. Ms. Kadeer, an entrepreneur and Chinese politician who was jailed by China's government and eventually left for a life of exile leading the World Uyghur Congress, was then already pushing hard against this narrative. But nearly a decade later, when I listened to her speak at a talk in Tokyo, Ms. Kadeer was still saying the same things, and seemed to have made little progress in the fight for Xinjiang's 10 million Uyghurs.

In fact, things in Xinjiang are far worse today than a decade ago. One reason is that Uyghurs – unlike Tibetans – make for a particularly unlikely cause célèbre, being an inconvenient Muslim minority lodged in the desolate expanses of a powerful state few countries will dare anger. But the main reason things are worse today is because of Beijing's ham-fisted response to the Uyghur issue: a widespread, alienating crackdown that has stoked tensions further.

Ms. Kadeer, whose detention elevated the Uyghur cause internationally before she was released in 2005, does not command the same attention now. She does not deliver her remarks abroad in English, unlike the Dalai Lama. She thunders her Turkic-Uyghur language in a resonant voice that lessens in impact as it filters through her bookish translator. She is unlikely to fill a stadium. When we spoke in 2007, I already couldn't find anyone who wanted to publish the interview.

That has changed: Xinjiang is newsworthy again.

Unfortunately this is because fringe elements among the Uyghurs – unlike Tibetans who have immolated themselves in protest – have begun knifing, rioting and killing innocent Han Chinese settlers in Xinjiang, as well as elsewhere, such as in Kunming. Every fresh, though entirely predictable, reaction of outrage in China – or abroad, such as in an August bombing in Thailand in which Uyghurs are suspected – simply permits China greater latitude in dealing harshly with the Uyghurs.

Beijing's hold over the land that now comprises the Xinjiang Uyghur Autonomous Region – which stretches west from China's Gobi Desert, north of Tibet and all the way to the borders of Russia, Afghanistan and Kyrgyzstan – has always been precarious. The region was a distant colonial acquisition of Chinese dynasties thousands of kilometres to the east. The region even temporarily broke away – declaring itself East Turkestan – in the political chaos of China in the 1930s and 1940s. The land is studded with ancient Buddhist landmarks and steeped in Silk Road history: Caravans took routes around the Taklamakan Desert's towering dunes and stopped in oases such as Turfan, Urumchi, Yarkand and Kashgar. These names are now synonymous for clashes between Uyghurs and recent Han migrants.

The Silk Road's ethnic melting pot is now a distant memory. Today, the Chinese run the show in Xinjiang, both in business and in politics, with Uyghur workers losing out to Han migrants. Mosques are monitored; religious gatherings can attract the police. Imams are suspect and there have been intermittent crackdowns on Islamic clothing and beards. Those who push for better rights are labelled "splittists" and dissidents, and locked away.

"The policy of the Chinese government is to treat East Turkestan like a war zone," Ms. Kadeer told the Foreign Correspondents' Club in Tokyo in mid-October as part of a visit to see supportive Japanese politicians. "It looks like a war zone. Every day there is a bloody incident and every day Uyghurs are being killed by the Chinese security forces. This situation is deteriorating."

The blame for this tragic situation – an opaque, rising power, anxious about territorial integrity, relentlessly persecuting a minority whose every ethnic, linguistic and religious difference reminds its colonizers, and the world, of their precarious hold – belongs squarely with China, both historically and in the present.

There's not too much one can do about history – unless someone wants to do what Russia did in eastern Ukraine. So, that leaves us with the present.

Until China begins treating Xinjiang like a normal province, and the Uyghurs like the citizens with equal rights that they are, the situation is unlikely to get better. And that's too bad, because China has actually created its own legitimate security concerns in Xinjiang (its citizens are also now joining Islamic State militants). While generating untold misery among the Uyghurs, Beijing has endangered innocent Han migrants trying to make a living on China's frontier and made China a more dangerous place.

The near-term future looks grim in Xinijang. But even if it's tough, Ms. Kadeer obviously can't give up just yet. 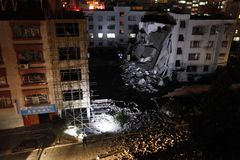