When the Asia-Pacific Economic Cooperation summit wraps up this weekend, the 23 leaders assembled in this Russian port city will gather for their traditional "family photo" and then issue communiqués emphasizing the need for co-operation across a region that accounts for 44 per cent of all trade.

With Europe in crisis and the global economy badly in need of good news, APEC should never be more important than it is now. But behind the scenes, this grouping of the region's economies – conceived in 1989 as a way of promoting trade while shelving political differences – is facing an existential crisis.

The threat to the grouping's relevancy comes in the very sort of politics that APEC was designed to avoid. The United States, frustrated with a Chinese leadership that has benefitted from membership in international trade organizations while refusing to fully open its own markets or allow its currency to float, is working to gather the economies it considers friendly in a proposed free-trade area dubbed the Trans-Pacific Partnership.

Canada, should it be willing to open its poultry and dairy markets to increased competition, is on track to join that club, as is Mexico. Australia, New Zealand, Chile, Peru, Brunei, Singapore, Malaysia and Vietnam are already full partners in the TPP talks, and Japan is being actively courted. China, meanwhile, feels it has intentionally been snubbed.

"China's exclusion is strange given its huge economic presence in Asia-Pacific. This has given rise to views that the U.S. is driving the TPP with the strategic objective of marginalizing China," read an opinion piece printed in the official China Daily newspaper ahead of the APEC summit in Vladivostok.

Prime Minister Stephen Harper's government says it sees a role for both the TPP and for APEC. But it clearly envisions the former as an active free-trade area, and the latter as a mere talking shop for dealing with regional issues.

"These [TPP partners] are all countries that have made clear commitments to fighting protectionism and to enhancing trade by the removal of tariff and non-tariff trade barriers," Trade Minister Ed Fast said in an interview with The Globe and Mail in Vladivostok ahead of Mr. Harper's arrival here Friday. Mr. Fast said that while "the TPP is not an exclusive group," it was intended to "bring like-minded countries within the Asia-Pacific region together."

APEC was never about which countries were and weren't "like-minded," a term more often used to describe members of the NATO alliance. So on Thursday – and after initially promising they wouldn't use the Vladivostok summit as an opportunity to develop their separate trade grouping – Mr. Fast and the other TPP participants met on the sidelines of APEC to talk about the next round of TPP negotiations. They'll meet again next week in Leesburg, Va.

Undeterred, Beijing is working to build a rival free-trade area of its own, with formal negotiations on a tripartite free-trade pact with Japan and South Korea set to begin by the end of the year. In the spirit of APEC, any deal would bring together the three main economies of East Asia, while leaving aside the mounting political disagreements – including thorny territorial disputes – between Beijing, Tokyo and Seoul.

Which way Japan, the world's third-largest economy after the U.S. and China, tilts is seen as crucial to the success of the TPP. Tokyo clearly views this as an either-or decision, and has given strong indications that it sees the tripartite regional deal as more advantageous (and less difficult to join) than the TPP, which would require opening its own highly protected agricultural markets.

Meanwhile, an APEC-wide free trade area – which leaders have spoken loftily about at summit after summit – is an ever-distant bell. Success within APEC is measured in incremental progress, such as the minor agreement trade ministers reached on Friday that will see tariffs capped at 5 per cent for a list of 54 environmentally friendly goods. (Canada has already met the new tariff goal on 51 of the items.)

Host Russia, which has only just turned its attention to APEC after decades of focusing on its European neighbours, is clearly concerned that APEC is on the verge of being marginalized as the region dissolves into competing blocs. "The position of the Kremlin is we only need APEC. We don't need the development of these blocs within blocs. We learned this lesson during the Cold War," said Andrey Gubin, associate professor of international relations at the Far East Federal University, the school that will inherit the campus on Vladivostok's Russky Island that is currently hosting the APEC summit.

Thai Prime Minister Yingluck Shinawatra is another leader expected to plead with her colleagues to focus their trade-promotion efforts through APEC. But Thailand is itself a member of the 10-member Association of Southeast Asian Nations, which is pushing towards the creation of yet another trading bloc, known as ASEAN+6, which would include neighbours China, India, Japan, South Korea, Australia and New Zealand. Born partly out frustration with the exclusiveness of the TPP invitations, ASEAN+6 would immediately become the world's largest free-trade area if it comes to fruition.

Of course, some of these emerging blocs have overlapping membership – particularly if Japan and South Korea can be lured into the TPP – arguably creating a framework for the region-wide pact APEC always talks about but never approaches.

But the lesson the "like-minded" TPP governments have learned is that it is impossible in the long run to completely separate trade from the rest of international relations. Free trade requires trust, and that's absent in the wider APEC forum right now.

Despite APEC's trade-focused mandate, politics look set to take over much of the Vladivostok meeting. U.S. Secretary of State Hillary Clinton – standing in for the campaigning President Barack Obama – has been trading veiled barbs with the Chinese leadership all week as she toured the region before arriving in Vladivostok. Washington has criticized Beijing's claim to the entire South China Sea, while China clearly feels threatened by the U.S. military's declared "pivot" towards Asia. Nor will Ms. Clinton miss the opportunity at APEC to again pressure Russian President Vladimir Putin and Chinese President Hu Jintao over the deepening quagmire in Syria.

With an election in his near future, and nationalist passions rising over island disputes with China and South Korea, Japan's Prime Minister Yoshihiko Noda – the most sought-after man at the summit – will likely back away from both the TPP and the tripartite trade pact for the time being.

APEC leaders will be left to sign the deal capping environmental tariffs. They'll issue the usual statements about the need for greater co-operation across the region, especially with the global economy facing badly uncertain times.

And then the leaders will leave Vladivostok, and the real trade talks will begin elsewhere. 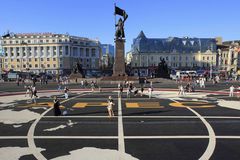 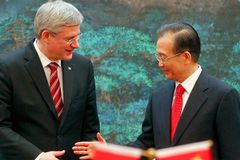