For months, hundreds of penniless villagers have been arriving in Nigeria's capital with little more than their clothes and a few chickens. They leave behind a scorched land of destroyed churches and looted homes, now controlled by the Islamist extremists of Boko Haram.

The kidnapping of more than 200 schoolgirls by Boko Haram last month has shocked the world, but many Nigerian villagers have been enduring deadly attacks for a year or longer. Thousands have fled across the borders to Cameroon or Chad, or southward to the capital, Abuja.

The statistics are horrific: In the northeastern district of Gwoza alone, 147 Christians have been killed in the past year, 87 churches have been torched, 56 villages have been emptied of all Christians and close to 15,000 people have been forced to flee, according to a tally by the community's leaders.

With Boko Haram driven out of the major cities in northern Nigeria, the villages are increasingly exposed and vulnerable, especially near the mountain hideouts of the extremists, who are now wreaking havoc on them.

The war with Boko Haram has killed 12,000 people so far, Nigerian President Goodluck Jonathan said in a speech to a weekend summit in Paris.

"Our people had to leave because we didn't know how to defend ourselves," says Michael Yohanna, a 57-year-old leader of the Christian community in Gwoza, about 100 kilometres northeast of the village of Chibok, where the schoolgirls were abducted.

"Nobody is in their homes any more," he said in an interview in Abuja. "I've been running from place to place. My family is scattered."

Five of his cousins have been killed by Boko Haram militants in the past year, Mr. Yohanna said. The victims are usually shot to death, or their throats are slit, often in front of their own children, he said. In response, many people have fled their homes, sometimes sleeping in caves or trees to hide.

A house in Abuja's suburbs has become a way station for hundreds of villagers from Gwoza who have escaped the attacks. Even its tiny guard house was sheltering six people at one point. Another 20 families have moved on to a nearby town, where they've set up their own refugee community.

Almost every day, Mr. Yohanna gets more phone calls from Gwoza, describing the latest devastation. On Monday, for example, he heard that three more villages were emptied and their 200 residents fled across the border to Cameroon.

Last week, 54 more villagers arrived in Abuja, where they are sleeping in a school and a church. Their sorghum and maize crops had been destroyed by Boko Haram for the past two years, Mr. Yohanna said. "For them to remain for another year would be a disaster."

He often travels back to his home region to bring food, clothes and medicine to the survivors of Boko Haram attacks – although the extremists have placed a bounty of more than $10,000 on his head.

In total, nearly 40,000 people have fled northeastern Nigeria because of the insurgency – mostly to Cameroon, Niger and Chad, according to United Nations information.

At the weekend summit in Paris, where European and African nations pledged a coordinated war against Boko Haram, Mr. Jonathan disclosed that his government has deployed 20,000 troops to northeastern Nigeria to search for the kidnapped girls and to fight Boko Haram.

But many people in the northeast are skeptical that soldiers alone will win the battle. Boko Haram infiltrators have become deeply entrenched in local governments in the region, so that Boko Haram is sometimes just the muscle for local officials who want to seize homes, they say.

Another problem is that the insurgents can simply melt into the local communities if they are attacked by soldiers. 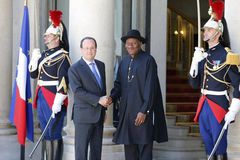 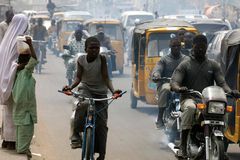 After Boko Haram attack, fear lingers for Nigeria students
May 16, 2014 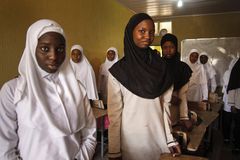