Barely a month before a crucial Nigerian election, Boko Haram extremists are escalating their campaign of terror, recruiting children as suicide bombers and expanding their territory by slaughtering hundreds of civilians and soldiers.

The Islamist radical militia is now believed to control more than 50,000 square kilometres of northeastern Nigeria – a territory bigger than Denmark. The seemingly unstoppable expansion could have a huge influence over the Feb. 14 election in Africa's most populous country and biggest economy.

Boko Haram's expanding grip on the northeast will prevent more than one million Nigerians from voting in the election, throwing doubt on the legitimacy of what will probably be the closest vote in Nigerian history. President Goodluck Jonathan is struggling to fend off a strong challenge from former military ruler Muhammadu Buhari in the national election.

Boko Haram had already gained worldwide notoriety by kidnapping more than 200 schoolgirls last year, defying all efforts to free them. But over the past week, its fighters reportedly killed as many as 2,000 villagers in 16 communities, after overrunning a Nigerian military base in the strategic town of Baga on the shores of Lake Chad.

The Nigerian military did not give its own estimate of the dead, but confirmed that the slaughter around Baga was the deadliest ever committed by Boko Haram.

The extremist group also recruited two girls, believed to be around 10 and 15 years old, for suicide attacks that killed more than 20 civilians in two northeastern towns on the weekend.

Many leaders in Africa and elsewhere have called for a concerted international campaign to end the Nigerian bloodshed, especially after the Baga massacres and the child suicide bombings.

"These images from northern Nigeria should be searing the conscience of the world," UNICEF executive director Anthony Lake said in a statement on Sunday.

"Words alone can neither express our outrage nor ease the agony of all those suffering from the constant violence in northern Nigeria," he said. "But these images of recent days and all they imply for the future of Nigeria should galvanize effective action. For this cannot go on."

Canadian Foreign Affairs Minister John Baird said the Boko Haram extremists are killing thousands of civilians indiscriminately. "I am appalled by these reports of entire towns burnt to the ground and the violent slaughter of entire communities," Mr. Baird said in a statement.

As the radical militia launched a wave of deadly attacks for several days around Baga, hundreds of villagers fled into Lake Chad. Some drowned. About 1,000 reached an island in the middle of the lake, where they were still stranded on the weekend, according to the United Nations refugee agency, UNHCR. Some were reported to be dying of hunger and cold on the island, which is infested with malaria-carrying mosquitoes.

More than 7,300 Nigerians fled across the border to Chad in the past 10 days because of the Boko Haram attacks, the UN agency said. In total, nearly one million people have been forced out of their homes because of the six-year insurgency, including 135,000 who have fled to Cameroon, Niger or Chad.

With its capture of the Baga military base, Boko Haram continues to tighten the noose on the biggest city in the northeast, Maiduguri, where several million people live.

Gaining control of Maiduguri would be the most shocking victory yet for the radical militia. It has already moved to within a few dozen kilometres of the city. For months, the city has been preparing for attack, digging a series of defensive trenches around its perimeter, according to residents.

Boko Haram bombing attacks have already ranged across northern Nigeria and as far south as the capital, Abuja, and several state capitals. On Friday, more than 100 militants attacked Damaturu, the capital of Yobe state, with grenade launchers and other weapons. They were repelled after killing five soldiers, the Nigerian military said.

In one of the most disturbing attacks, a bomb carried by a girl believed to be around 10 exploded in Maiduguri on Saturday, killing 19 people. Four more people were killed on Sunday by explosions from two female suicide bombers in a crowded market in the town of Potiskum.

Hundreds – too many to count – killed in Boko Haram attack
January 9, 2015 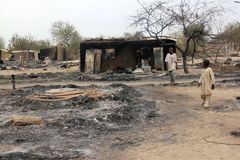