A powerful bomb hidden in a sewage tanker exploded in the morning rush hour in the center of Kabul on Wednesday, killing at least 80 people, wounding hundreds more and damaging embassy buildings, including Canada's, in the Afghan capital's unofficial "Green Zone."

The victims of the explosion at a busy intersection appeared mainly to have been Afghan civilians on their way to work or school, including office workers whose nearby buildings did not have the protection of the blast walls that fortify the zone.

The blast, at the start of the holy month of Ramadan, was one of the deadliest seen in Kabul, Deputy Interior Minister Murad Ali said.

A huge crater was caused at the blast site close to the German embassy compound, tearing the front off a building facing the street and shattering windows and blowing off doors in houses hundreds of meters away.

Analysis: Kabul bombing a reminder that war for Afghanistan is far from over 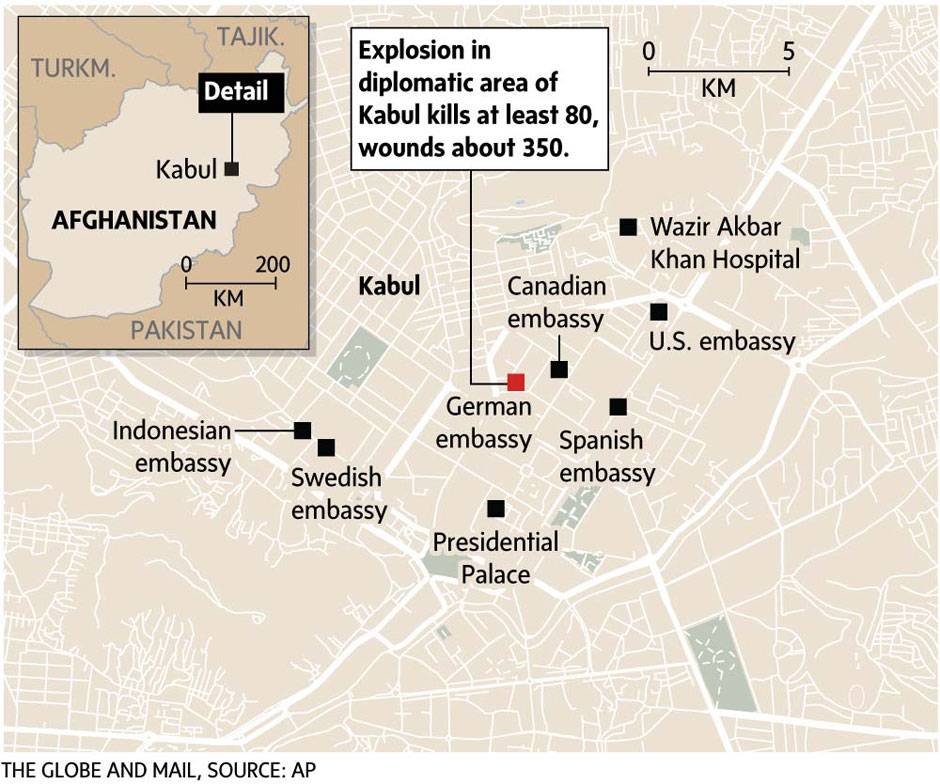 Related: A timeline of major attacks on Kabul in the past year

German Foreign Minister Sigmar Gabriel said some embassy staff had been injured and at least one local security guard was killed.

"Such attacks do not change our resolve in continuing to support the Afghan government in the stabilization of the country," Gabriel said.

The neighbourhood is considered Kabul's safest area, with foreign embassies protected by dozens of 10-foot-high blast walls and government offices, guarded by police and national security forces. The German Embassy, the Foreign Ministry and the Presidential Palace are all in the area, as are the British and the Canadian embassies. The Chinese, Turkish and Iranian embassies are also located there.

A Western official based in Kabul told The Globe and Mail that several embassies – including Canada's – had been damaged in the blast and that some diplomatic staff would be forced to either leave Kabul, or relocate to other facilities until repairs are completed.

Foreign Affairs Minister Chrystia Freeland said in a statement that the Canadian government is deeply saddened by the news that dozens of people were killed and hundreds others injured in a suicide attack near the diplomatic quarter of Kabul.

Although the first floor of the Canadian embassy sustained significant damage, there was minimal impact to the rest of the building and all embassy employees have been accounted for and are safe, said Ms. Freeland.

The timing of the "cowardly attack" during the holy month of Ramadan was deliberate and intended to target civilians and foreign service workers from some of our closest allies, she said.

"Canadian diplomats and our local staff, today and every day, continue to show the utmost resolve and courage in their work, which is essential," said Ms. Freeland.

"Together with our international partners we will never cease in our efforts to prevent violent extremism and to bring perpetrators of such violence to justice," she said. "Today, I also say to the Afghan people that they can continue to count on Canadians' unwavering support."

Damage was also reported at the embassies of China, Turkey, France, India and Japan, according to officials from those countries. Other nearby embassies include those of the U.S., Britain, Pakistan and Iran, as well as the NATO mission.

Nine Afghan guards at the U.S. Embassy were killed and 11 American contractors were wounded, with one Afghan guard missing, according to a U.S. State Department official, who was not authorized to talk publicly on the matter and spoke on condition of anonymity. None of the wounded Americans appeared to have life-threatening injuries, the official said.

The BBC said one of its drivers was killed and four of its journalists were wounded. Afghanistan's private TOLO Television also reported a staffer killed.

Basir Mujahid, a spokesman for the city police, said the explosives were hidden in a sewage truck. He also suggested that the German embassy might not have been the target of the blast, which sent clouds of black smoke into the sky near the presidential palace.

"There are several other important compounds and offices near there too," he told Reuters.

No group had claimed responsibility by Wednesday evening but Afghanistan's main intelligence agency, the National Directorate for Security, said it had been carried out by the Taliban-affiliated Haqqani network with assistance from Pakistan.

Both Pakistan and Afghanistan regularly accuse each other of supporting militant groups operating across the border.

The Taliban, seeking to reimpose Islamic rule after their 2001 ouster by U.S.-led forces, denied responsibility and said they condemned attacks that have no legitimate target and killed civilians.

Islamic State, a smaller militant group in Afghanistan seeking to project its claim to a global Islamic caliphate beyond its Middle East base, has previously claimed responsibility for high-profile attacks in Kabul, including one on a military hospital in March that killed more than 50 people.

The NATO-led mission in Kabul said Afghan security forces prevented the vehicle carrying the bomb from entering the Green Zone, which houses many foreign embassies as well as its own headquarters, also suggesting it may not have reached its intended target.

In the immediate aftermath of the blast, the scene was littered with burning debris, damaged walls and buildings, and destroyed cars, many with dead or injured people inside.

At the Wazir Akbar Khan hospital a few blocks away from the blast, there were scenes of chaos as ambulances brought in wounded. Frantic relatives scanned casualty lists.

"It felt like an earthquake," said 21-year-old Mohammad Hassan, describing the moment the blast struck the bank where he was working.

"I couldn't think clearly, there was a mess everywhere," he said.

Frenzy erupted outside the hospital as ambulances and police trucks began bringing in the bodies of those killed. Some were burned or mutilated beyond recognition.

President Ashraf Ghani condemned the attack, which will add to pressure on his fragile government, already facing mounting discontent over its inability to provide security.

The attack drew international condemnation, ranging from India and Pakistan to the United States, the European Union and Pope Francis.

German Chancellor Angela Merkel condemned the attack, saying that "terrorism has no borders."

It "targets all of us — whether in Manchester or Berlin, Paris, Istanbul, St. Petersburg or today in Kabul," she said in the southern German city of Nuremberg.

U.S. President Donald Trump spoke with Ghani after the attack, and Secretary of State Rex Tillerson said it was a "senseless and cowardly act."

"The United States stands with the government and the people of Afghanistan and will continue to support their efforts to achieve peace, security, and prosperity for their country," Tillerson said in a statement.

The United Nations Special Representative in Afghanistan, Tadamichi Yamamoto, described the attack as an outrage.

The Taliban have been stepping up their push to defeat the U.S.-backed government. Since most international troops withdrew at the end of 2014, the Taliban have gained ground and now control or contest about 40 percent of the country, according to U.S. estimates, though Ghani's government holds all provincial centers.

Trump is due to decide soon on a recommendation to send 3,000 to 5,000 more troops to bolster the small NATO training force and U.S. counter-terrorism mission now totalling around 15,000.

The commander of U.S. forces in Afghanistan, General John Nicholson, told a Congressional hearing this year he needed several thousand more troops to help Afghan forces break a "stalemate" with the Taliban.

ANALYSIS
Deadly Kabul bombing the latest in a raging Afghanistan war
May 31, 2017
In photos: Scores killed in Kabul's embassy district bombing
Gallery
May 31, 2017
After decades of conflict, millions of women in Afghanistan are raising children on their own. Here are their stories
May 14, 2017
Report an error
Due to technical reasons, we have temporarily removed commenting from our articles. We hope to have this fixed soon. Thank you for your patience. If you are looking to give feedback on our new site, please send it along to feedback@globeandmail.com. If you want to write a letter to the editor, please forward to letters@globeandmail.com.
Comments