In a career spanning four decades – including stints as police chief for two of America's largest cities – William Bratton has never seen anything like what occurred in Boston last Friday.

As authorities pursued the surviving suspect in the Boston Marathon attack, they took an unusual step. They shut down a major city for roughly 10 hours by suspending public transportation and asking a million people to stay in their homes. That effectively paralyzed the Boston metropolitan area, the tenth largest urban centre in the U.S. with a population not far behind Toronto and its environs.

The scale and scope of the shutdown was unprecedented, said Mr. Bratton, as was the degree of public co-operation.

"I was amazed, to be frank," said Mr. Bratton, a Boston native who headed the police departments in New York and Los Angeles. "Bostonians are not known for their compliance with authority going back to revolutionary times."

Boston's decision to close down marks a new turn for cities grappling with violent and frightening events. The move has elicited both praise and criticism, with some commentators applauding its role in ensuring public safety and others decrying it as overkill.

Paired with the successful conclusion of the manhunt, experts say, the shutdown represents a possible template for parallel incidents, should they emerge in the future.

"There is a lot more likelihood for governors and mayors to do something like this in similar situations," said Martin Reardon, a former federal agent and veteran of counterterrorism operations who now works at the Soufan Group. "This was a request and the public went along with it. You may see that again."

The string of decisions began in the tense early hours of April 19, after Tamerlan Tsarnaev was fatally injured during a gun battle with police while his younger brother, Dzhokhar, escaped. First, the police asked all residents of Watertown, a Boston suburb, to remain in their homes. Shortly afterward, they extended the request to five neighbouring communities. At about 8 a.m., Deval Patrick, the governor of Massachusetts, asked everyone in Boston to stay inside until further notice.

At the same time, authorities shuttered the public transportation system, suspended taxi service in the city and cancelled trains between Boston and points south.

Asking people to stay indoors on such a large scale is a move usually reserved for bad weather or natural disasters. In February, for instance, Mr. Patrick declared a state of emergency ahead of a major blizzard, warning drivers to stay off the roads or face fines and possible jail time.

By contrast, Friday's shutdown was purely a request. For much of the day, nearly all businesses in Boston were closed and most sidewalks were deserted... save for the occasional pedestrian. Traffic was sparse. "It's eerie," said Cam Schriefer, a 24-year old mortgage broker, in an interview Friday afternoon when he went outside to walk his black cocker spaniel.

Critics called the shutdown of the city an overreaction fraught with unwanted symbolism. "Never, in the history of violence aimed at innocent civilians, have the lives of so many been disrupted so much by the relatively amateurish actions of so few," wrote a columnist for the Israeli newspaper Haaretz.

Adam Gopnik of the New Yorker recalled being in London during the deadly attacks on its subway system in 2005 and noted that the city continued to function, even though the bombers were believed to be still at large. "The decision to shut down Boston, though doubtless made in good faith and from honest anxiety, seemed like an undue surrender," he wrote.

Experts said they respected Boston's move, particularly given the uncertainty about what the bombers intended to do and whether they had accomplices. But some questioned whether the tactic could be applied in other places.

"It's hard to imagine seeing it happen in New York," said Mitchell Silber, a former counterterrorism official at the New York Police Department who last year joined K2 Intelligence. "You could shut down an area, you could shut down Wall Street – but the whole city?"

That sentiment was echoed by Jody Weis, the former superintendent of the Chicago Police Department who also spent more than two decades with the FBI. In a sprawling city like Chicago, where some neighbourhoods experience danger as a daily reality, Mr. Weis said it was doubtful if so many people would heed a similar request.

"I just thought it was incredible co-operation" from Boston residents, Mr. Weis said. "It was a really good idea. Nobody knew what these guys were planning."

Law enforcement agencies will make their own judgments about the effectiveness of the shutdown. "Was it too large? Was it appropriate? That will be part of the after-action reviews that will now be conducted," said Mr. Bratton, the former Los Angeles police chief.

Specific circumstances will determine whether the steps pioneered in Boston will be used in the future. "It'll be like every tool," he said. "Do you need a sledgehammer to drive a nail or do you need a hammer?"

Former law enforcement officials reflect on some of the persistent questions and emerging lessons of the Boston attacks:

A major source of scrutiny in the coming weeks will be the prior contact between the FBI and Tamerlan Tsarnaev, and whether the agency missed warning signs. "You can't track every person," said Mitchell Silber, a former counterterrorism official with the New York Police Department. "Were there enough dots [to connect] in this case?"

Expect heightened security at sporting events and large public outdoor gatherings, including a greater police presence, more screenings, and mobile surveillance cameras. "We have to strengthen soft targets more than we have in the past," said Jody Weis, the former superintendent of the Chicago Police Department.

The presence of surveillance cameras was critical to reconstructing how the attacks took place and pinpointing the perpetrators. Some cities like New York already make extensive use of such cameras; experts predict the trend will accelerate.

In the aftermath of the Boston attack, U.S. authorities asked for help from the public, first in contributing images and video from the site of the bombings, and later in identifying the two suspects. On both scores, "They asked and the public delivered," said Martin Reardon, a veteran of FBI counterterrorism efforts.

Tools like Twitter have opened a direct channel between law enforcement authorities and the public. The Boston police used its Twitter feed to disseminate information and correct false reports in the media – like the ones that wrongly asserted a suspect was in custody on April 17. "You used to have to wait every three hours and hold a press conference," said William Bratton, the former chief of police in Los Angeles and New York. "Now you can drive the story with more accuracy than the press can. The police are the source."

One week on, Boston crowds gather in silence at bomb site
April 22, 2013 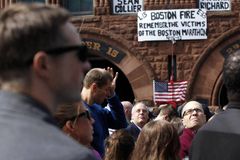 The Dzhokhar Tsarnaev case through the eyes of Alberto Gonzales
April 22, 2013 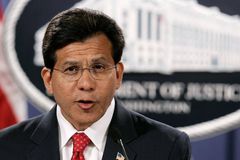