U.S. President Barack Obama's emotional speech in Boston Thursday was just the latest occasion where he was left to act as "consoler-in-chief," delivering words of comfort after a mass tragedy. And though Mr. Obama has mostly received praise for his handling of these incidents, there have been times where his response has fallen flat. Here's a look at some of Mr. Obama's most notable speeches:

In the hours after a shooting rampage at a Texas army base in November, 2009, that left 13 dead, President Obama was criticized for delivering a speech that some described as "flippant" and "frighteningly insensitive" . The criticism was targeted at the fact that in the speech – a previously scheduled appearance at a Tribal Nations Conference – the President waited until two minutes in before bringing up the shootings, and only after a "shout-out" to one of the event's attendees.

Several days later, however, Mr. Obama redeemed himself at the memorial service for the Fort Hood victims, in which he paid tribute to each of the 13 soldiers killed. "Their lives speak to the strength, the dignity and the decency of those who serve, and that is how they will be remembered," he said to the thousands of soldiers in attendance. "We need not look to the past for greatness, because it is before our very eyes."

Mr. Obama was widely praised for his response to the January, 2011, shootings at a Tucson supermarket parking lot that left six people dead and U.S. Representative Gabrielle Giffords in critical condition. Mr. Obama's speech in Tucson, which spoke of "hearts full of hope" and described how Ms. Giffords that same morning had opened her eyes for the first time since the shooting, was particularly lauded because it was in such marked contrast with the response of his political opponent, Sarah Palin.

In a long, rambling video statement, Ms. Palin focused much of her attention on blaming journalists and pundits for "manufacturing a blood libel," and disputing accusations that her violent political rhetoric had somehow played a part in the shootings.

As with his speeches in Tucson and Fort Hood, Mr. Obama chose to focus on the individuals victims in Aurora, Colorado, when he spoke with the families of those killed in the July, 2012, movie theatre shooting.

In his speech, he told the story of a 21-year-old woman named Stephanie who had saved her friend Allie's life by staying with her and nursing her wound, despite danger to herself.

"As tragic as the circumstances of what we've seen today are, as heartbreaking as it is for the families, it's worth us spending most of our time reflecting on young Americans like Allie and Stephanie," Mr. Obama said. "They represent what's best in us, and they assure us that out of this darkness a brighter day is going to come."

For many Americans, Mr. Obama's response to the mass shooting at Sandy Hook elementary school was the most emotional they had ever seen the president. In the days following the shooting, Mr. Obama was seen repeatedly tearing up when speaking about the 20 children and six adults who had been killed.

Like his previous speeches, Mr. Obama made note of the "good guys" – the first responders and teachers who had tried to save their students lives – before naming every one of the victims who had been killed.

But whereas Mr. Obama's previous speeches had been decidedly apolitical, his appearance in Newtown was a call for action on gun control. "We can't tolerate this any more. These tragedies must end," he said, pledging to work with law enforcement to try to prevent future incidents. "To end them, we must change."

In the months following the December, 2012 shooting, Mr. Obama was criticized for politicizing the tragedy , including earlier this week, when parents of the shooting victims appeared at his side after Senate rejected a plan to expand control measures. 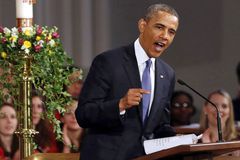 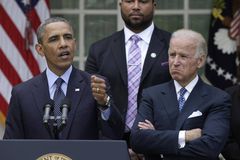