It was not like Ted Cruz to throw in the towel as he did Tuesday night in Indiana by suspending his campaign for president. The junior senator from Texas, first elected in 2012, is a tenacious fighter who took his improbable campaign for the Republican nomination further than any challenger other than Donald Trump.

But if history is any indication, his is a tactical withdrawal and Mr. Cruz already is positioning himself for another run at the nomination in four years' time – his self-confidence and ambition are that unbounded.

In the senator's tiny, windowless office at the top of a spiral staircase in the U.S. Capitol Building in Washington, hangs a passage of a speech given by Theodore Roosevelt that reflects how Mr. Cruz sees himself. It extolls the virtues of "the man who is actually in the arena, whose face is marred by dust and sweat and blood," who may know victories and defeats but is fighting to make a difference.

Mr. Cruz has thrived on fighting.

Most famously, in just his first year in office, he led a Tea Party-style revolt against his own party leaders and triggered a two-week government shutdown rather than pass compromise legislation to fund the Affordable Care Act, a mild form of subsidized health care loathed by the right wing. Mr. Cruz's recklessness led John Boehner, then speaker of the House and a fellow Republican, to describe Mr. Cruz last week as "Lucifer in the flesh."

"I have never worked with a more miserable son of a bitch in my life," said the now-retired Mr. Boehner, who was plagued during his time as speaker by conservatives such as Mr. Cruz, who disliked what they viewed as Mr. Boehner's country-club kind of Republicanism.

Making enemies of people such as Mr. Boehner is something Mr. Cruz wears as a badge of honour. In 2015, on the floor of the U.S. Senate, he called his own party's majority leader, Mitch McConnell, a liar.

But this belligerence, and the sense of superiority that lies behind it, would come back to haunt him.

He came by these traits naturally.

His father, Rafael Cruz, born in Cuba, had come to Texas as a student and refugee in the late 1950s after being arrested and tortured by security forces of dictator, Fulgencio Batista.

When Donald Trump attacked his father Tuesday morning, telling Fox Television that the senior Mr. Cruz was an associate of Lee Harvey Oswald just prior to the assassination of John Kennedy, Ted Cruz launched a tirade against the now presumptive nominee describing him as a "pathological liar," a "narcissist" and a "serial philanderer."

The senior Mr. Cruz had turned to evangelism in Houston and young Felito, as Ted was then known, was baptized into the evangelical Southern Baptist Church.

"Inviting Christ to rule my life … at eight years old is the best decision I have ever made," Mr. Cruz said. Gaylon Wiley, young Felito's pastor at Clay Road Baptist Church in Houston, told reporters he remembers the boy as being just like all the other kids "except he had the IQ of his father – he was three stages ahead."

Mr. Cruz was a gifted student at the private red-brick Second Baptist High School in Houston's fashionable Galleria neighbourhood and was encouraged to read the works of Adam Smith and Milton Friedman, as well as the Austrian economist Ludwig von Mises, a particular hero of U.S. libertarians. A novel Mr. Cruz read at that time, Atlas Shrugged by the libertarian Ayn Rand remains his favourite book to this day.

Ted's yearbook entry said he hoped to attend Princeton University, then Harvard Law School, achieve a successful law practice then enter politics and "eventually … run for and win President of the United States."

He's achieved every goal except the very last one.

At Princeton, Mr. Cruz became a national champion debater in 1992. Prime Minister Justin Trudeau, while at McGill University, once went up against Mr. Cruz in debate. It didn't end well for the Canadian team, Mr. Trudeau later admitted.

"For a guy like Ted," said a classmate, "this whole experience legitimized his world view," a reference to his humble immigrant origins and southern evangelism.

It also went to his head.

He worked in various departments in Washington as well as on the 2000 Bush campaign and on the recount of ballots in Florida that secured George W. Bush the presidency. It was there he met his wife Heidi, now a senior executive (on leave) at Goldman Sachs.

However, Mr. Cruz missed out on a coveted position in the Bush White House.

"I was far too cocky for my own good," Mr. Cruz wrote in his book, "and that sometimes caused me to overstep the bounds of my appointed role."

In his presidential bid, Mr. Cruz's campaign appearances were part preacher and part skilled university debater. He strode onto the stage, immediately shaking the hand of all the people nearest the platform. He dropped to one knee so he could better reach the people. It's a move his pastor in Houston uses during his sermons – it's meant to project humility.

"We're gathered here today because our country is in crisis," he told the audience in Cicero, near Syracuse, N.Y. Long pause. "But people are waking up and help is on the way," he said, sounding rather like a salesman at an old-time medicine show.

As "a constitutionalist" he argues for the rights of states, such as North Carolina, to make their own laws and he approves of laws to restrict transgender people's access to public washrooms, limiting the person to use only the washroom designated for his or her birth gender.

"Enough already," Mr. Cruz said. "I do not want men going to the bathroom with my little girls."

Mr. Cruz tried hard to be likeable. He would quote at length lines from his favourite movie, The Princess Bride, pose for selfies and talk often about his daughters, ages 8 and 6.

"However, it all seems calculated," said a fellow Princeton grad and former Rehnquist clerk, who insisted on speaking anonymously owing to the sensitive public position he holds. "That's the thing I've noticed about Ted over the years – everything is so carefully planned."

Mr. Cruz had counted on the Republican leadership viewing him as a lesser evil to Mr. Trump. They didn't. And for that he has only himself to blame.

With Indiana, it became clear he had lost not only the party establishment but also the white, socially conservative, evangelical communities that usually support him and not even his vaunted grassroots organization could save him.

At that moment, Mr. Cruz took a leaf from the book of another late president, Ronald Reagan, who lost his first bid for the Republican nomination in 1976, and immediately went to work on his next campaign.

Cruz fights for survival as Trump eyes Indiana knockout
May 2, 2016 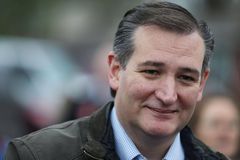