But the package is unpopular: Polls show about 75 per cent of Brazilians oppose it, and protesters demonstrated against it across the country earlier this month. And one aspect in particular – a proposal to make the pension requirements for men and women equal – has set off a fierce debate, with some feminist scholars arguing that the change will reduce inequality – or, others say, permanently enshrine it.

At present, Brazil has a complex but generous system of benefits: Men retire at an average age of 55, women at 53, and many draw close to their full salary for the rest of their lives.

But an aging population combined with a dramatic drop in fertility rates have undermined the pension system – and the sharp recession of the past two years has made the problem worse.

"Leaving things as they are today is unacceptable and reckless," President Michel Temer said in early March. "If we do nothing, today's young people will not be able to retire in the future. And today's retirees will have their existing benefits reduced." Brazil's pension obligations at this point sit at 12 per cent of GDP.

The proposed change would impose a minimum retirement age of 65 for both men and women, and require a minimum of 49 years of work, up from 30 for urban workers, or 15 for rural. Currently, men have to work five years longer than women do.

Mr. Temer is unpopular, as are his economic policies, and the pension law has stirred up particular ire because he has exempted the armed forces (who have some of the most generous benefits, nine times the average) and state and municipal employees, who earn six times the average pension.

Many analysts say the changes will hit low-income workers hardest, and Mr. Temer's critics argue that his plan erodes the slim social safety net for the poorest Brazilians while taking no measures that target the country's influential wealthy elite.

The one proposal Mr. Temer might have imagined would win favour with leftist critics was to end the discrepancy between men and women on pensions – both genders would face the same retirement qualifications.

Economist Marcelo Caetano, an author of the proposed law, says it brings Brazil in line with most other countries, by treating men and women equally.

Many Brazilian feminists, however, see it differently: Women deserve to be able to retire earlier, they say, because they worker harder, for longer.

"Women are in lower-wage jobs, they are the first to be fired, they make up more of the unemployed, and they face a huge difference in salary for work of equal value – white men earn on average 30 per cent more than white women, and 59 per cent more than black women," said Natália Mori, director of the Feminist Studies and Advisory Center, a non-profit research organization in Brasilia.

Responsibility for domestic work in Brazil falls almost entirely to women, she said, and it adds up to an average of eight years more "work" in a woman's life. Pensions are at present the only social benefit that recognizes women's "second shift," and the differential actually ought to be greater, not eliminated, she said.

Some scholars, however, argue that enshrining the difference in pension law is regressive, tantamount to formalizing domestic work as women's work – and that the wage gap or failure of men to do more child care would be better addressed through policy measures such as paternity leave, which today in Brazil is just seven days.

Lena Lavinas, a professor of economics at the Federal University of Rio de Janeiro and prominent commentator on gender issues, says she was for years an advocate of an equal pension age, and she rejects the argument that women should be compensated for domestic work with an earlier retirement age.

But she has come to believe that women must be afforded a lower age or earnings-retirement threshold, because the gender wage gap has not narrowed over time, and women's employment trajectory (including the amount of time they spend in the work force, with permanent, full-time, pensionable earnings) has not come to more closely resemble men's. Women live longer, and they are being forced to do it on far smaller pensions, she said.

"We cannot ask both sexes to contribute for the same length of time because the way they participate in the labour market is not the same," she said in a telephone interview from Berlin, where she is a fellow at the Institute of Advanced Studies. "We want equality everywhere, of course – but if you're not equal in the labour market how can you be equal in your retirement?"

Marta Gueller, an expert on social security law in Sao Paulo, said the government's proposal was designed for Canada, or Denmark, where men and women have equal access to parental leave and other benefits – but fails to recognize the reality of Brazil, particularly of rural areas.

"When we have all those things working, fine, we'll fight for full equality of treatment," she said. "But until that happens, my fight will be to lessen the inequalities." 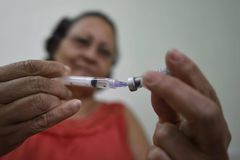