Back in June, a Brazilian reporter asked Aecio Neves how he would feel if he were elected this country's next president. It was something of a hypothetical question five months ago, since polls showed that President Dilma Rousseff had a massive lead over Mr. Neves in her bid for re-election.

Mr. Neves, the telegenic and charming scion of a wealthy political family, was anointed to the role of future president in his youth. He has followed the path laid out for him, and served as governor of one of Brazil's most important states. And yet a certain lack of enthusiasm for power – and a fondness for an easy life away from the spotlight – are unmistakable.

But now, as Brazil's election looms on Sunday, Mr. Neves, 54, is poised to win the presidency – whether he likes it or not. Polls give Ms. Rousseff just a two-point lead over Mr. Neves, and the first round of elections, earlier this month, showed the polls are unreliable. Mr. Neves, who heads the right-of-centre Brazilian Social Democratic Party, was the surprise second-place finisher in that round, when all the pundits had him pegged as a distant also-ran. In an electoral season when many voters talked about hunger for change, the candidate from the classic Brazilian mould proved to have surprising allure.

Mr. Neves got into politics at 22, when his grandfather, Tancredo Neves, summoned him from his economics studies to help campaign for office. The senior Mr. Neves was a much-loved leader in the opposition to the military dictatorship and in 1985, after sustained public pressure for open polls, was elected the first president in the return to democracy. He died before taking office, but the next year his grandson joined the family business and ran for Congress, was eventually made leader of the lower house and then elected senator before running for the top job in his home state.

"Everyone knew he would run for president, it's like it was in his DNA," said Marcelo Baeta, who made a documentary about Mr. Neves when he was a governor. "It was his destiny – the elite, the owners of industry and important economic sectors have been engaged in this project since [he got into politics]."

As Mr. Neves suddenly seems like the potential next president, Brazilians have been taking another look at him. He is best known as a playboy, a surfer and a partier, a fixture in the society pages. He married former model Leticia Weber in 2013 and they have infant twins; he also has a daughter from a first marriage that ended in divorce. Meanwhile, he is the subject of a series of blogs claiming to track his relationships with gatas – slang for foxy women – marital status notwithstanding.

Mr. Neves is running on his record as governor of Minas Gerais, a centre of mining and industry that is the third most important driver for the Brazilian economy. He says he pared a swollen bureaucracy and reduced the state's deficit to zero, while privatizing and improving public services. As part of a much-hyped "management shock," he froze senior public service salaries and cut his own by 45 per cent. Thisin turn attracted a surge of new investment in the state, and is a model Mr. Neves promises to replicate nationally in order to boost an economy teetering on the edge of recession.It all went over well in Minas Gerais – he left office in 2010 with a 90 per cent approval rating.

Throughout the campaign, however, Ms. Rousseff has warned that Mr. Neves would slash social programs on which low-income Brazilians depend, and polls suggest most believe her. Mr. Neves has countered that he wouldnot only maintain but broaden them.

The Brazilian private sector is backing him. But critics say Mr. Neves exaggerates his successes. Fabricio Augusto de Oliveira, an economist in Minas Gerais who closely tracked the Neves government, said considerable creative accounting went into the eliminated deficit– items such as unpaid interest on debts were eliminated from the budget, for example, while loans were included as revenue – and Mr. Neves in fact left office with a much higher deficit in real terms than when he arrived. State prosecutors repeatedly charged his government with failing to spend the constitutionally-mandated minimum amounts on health and education.

Yet those issues did not get close scrutiny in Minas Gerais, which Mr. Baeta, the filmmaker, attributes to the Neves administration's intense manipulation of the press: outlets that did favourable coverage were rewarded with fat government advertising contracts, while those that were critical got angry visits from senior Neves aides. Reporters who did critical investigations in the early Neves government years were fired, he said, and those investigations stopped – which helped with the massive popularity rating.

Mr. Neves' public image is carefully managed by his sister, Andrea Neves, his confidante and chief political strategist, who by all accounts is less able to let criticism roll over than he is.

Mr. Neves himselftold a Piaui reporter that he had been planning to go to Harvard when at the momenthis grandfather pulled him into politics. So he can imagine a life after Sunday's vote. "We win? How good for Brazil. We lose? Let's go to Harvard, right?"

Carlos Mosconi, a godfather figure in Minas Gerais politics who once lived with the Neves family and has known the candidate since he was a child, said the playboy reputation is exaggerated and that as governor he worked all week. "He always knew how separate his professional life from his personal life," he said.And then on the weekends he went to Rio. I don't see anything out of the ordinary. He is not a party boy, nothing exaggerated. He never really bothered to challenge this reputation, he never gave it too much importance. He is there, under an umbrella in Ipanema … He never hid that from anyone."

And any personal reluctance Mr. Neves may feel about the presidency is irrelevant. "He was born breathing politics. So, it's not about liking it or not liking it," Mr. Mosconi said. "I think he is responsible, and very aware of his responsibilities, of his role." 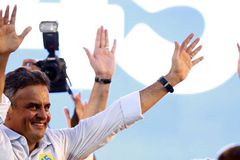 Globe in Brazil: Rousseff readies for a hard fight in runoff race
October 6, 2014 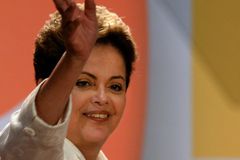