Brazilian authorities are investigating thousands of reports of fraud and criminal interference in the country's municipal elections, including one case in which the country's most notorious prison gang allegedly funded the campaign of a city councillor in an effort to broaden its sphere of influence.

The elections, for mayors and councillors, are the first to be held under a new electoral law adopted in September, 2015, that was meant to reduce corruption. The reform was prompted by the giant graft scandal known as Lava Jato, in which companies seeking contracts at the state energy company Petrobras paid kickbacks to politicians that were used, in part, to fund electoral campaigns.

The new law bans corporate donations to parties and candidates, and only permits individuals to make contributions, and only up to 10 per cent of their taxed income. There is no question it had an impact: candidates reported a total of 2.4-billion Brazilian reals ($1-billion) in funding to the electoral court in this election, compared with 6.3-billion reals in the last one, in 2012.

But as the election has unfolded (the first round of voting was on Oct. 2, the second and final one takes place Oct. 30), there have been signs that the law may have unintended consequences; corporate influence may be, at least officially, diminished, but that space is being filled by other actors.

Evangelical churches, to which nearly a quarter of Brazilians belong and which are keen to increase their political influence, have clearly gained prominence. And other, less savoury, organizations appear to have had a larger role in this election, too – including organized crime, drug-trafficking gangs that control favelas in Rio de Janeiro and Sao Paulo, and militias made up of corrupt current and former police.

Alexandre Rollo, who teaches electoral law to public servants at a government college in Sao Paulo, said the well-intended legal reform ended up transforming this into the election of "caixa dois," a ubiquitous Brazilian expression that literally means "second box" and refers to the illicit collection of funds.

"It's no use simply prohibiting donations from businesses – because the money finds a way," he said. "Simply prohibiting it stimulates caixa dois, 'alternative' ways to fund campaigns." It is difficult to trace criminal funding, he said, "but the authorities say they are seeing organized crime occupy [the former corporate space], funding candidates and increasing their influence."

The Electoral Court has identified 93,000 people with earnings incompatible with the amount of the contribution they made, totalling 300-million reals. For example, 22,400 people who receive the Bolsa Familia, a cash transfer for poor families, allegedly donated a total of 21.1-million reals. And 46,700 unemployed people together contributed 52-million reals. Investigators are seeking to establish whether these contributors knowingly made the donations using someone else's funds, or whether their national ID numbers were used fraudulently.

In the Sao Paulo satellite city of Campinas, police allege that the Primeiro Comando da Capital, one of Brazil's most notorious gangs, staged the entire campaign of a successful candidate for town council. In Rio, figures with well-known ties to militias and gangs made commercials in which they endorsed candidates.

Meanwhile Amaro Grassi, a sociologist with a Rio university called the Getulio Vargas Foundation, who was part of a team that analyzed all donations to candidates in the city in this election, said that the law may not have done much to limit corporate influence.

"The reform actually reduced the transparency and the accountability of the process," he said. An outsized proportion of donors who gave 30,000 reals or more were partners, presidents or directors at construction firms, real estate companies – the same kinds of companies, dependent on public contracts, that were financing campaigns before the reform. Analysts cannot tell whether those employees are being reimbursed by their employers, but that is their suspicion, he said.

"Our study showed that the new law just hid the origin of donations," he said. The total amount of donations did decrease because it became more difficult overall to donate, he said. "But it became more difficult for us as civil society to know what the relationships are. Before it was explicit – the companies donated to the candidates that promoted their interests – and you could trace that clearly."

In the last election, just 60 companies gave 90 per cent of the funds that came from private enterprise, according to an advocacy organization called the Movement to Combat Electoral Corruption. Brazil has hundreds of political parties, most of them small, weak and heavily reliant on donations; the amount of money given to campaigns has doubled or more in each of the past four elections.

Prof. Rollo noted that when Brazil transitioned from dictatorship to democracy in the late 1980s, corporate funding of campaigns was illegal – and then that law was changed because lawmakers concluded that corporate money would be easier to track. He called the new law a clear step backward.

But Sidia Lima, a political scientist and author of Accountability and Electoral Campaign Finance, said that the amount of money in campaigns in the early 1990s does not compare to the vast sums that are being spent now, and the reform will lead to greater transparency.

The Brazilian Republican Party, which is tied to a large evangelical church, had a particularly fruitful election; it elected 100 candidates for mayor with ties to the church (up from 76 in the last election), and a bishop from the church has a solid lead to be mayor of Rio, the country's second-largest city, as well. Prof. Rollo said that in an election with smaller budgets for publicity, the ability to mobilize a congregation takes on an outsize importance.

Prof. Lima predicted the law would be rewritten before presidential and Congress elections in 2018, after politicians saw how much less funding was available this time. Luciano Santos, who heads the anti-corruption movement, said his organization would use the courts to keep the ban in place. What Brazil needs now, he added, is tougher penalties, and better enforcement, to limit the role of criminal actors. 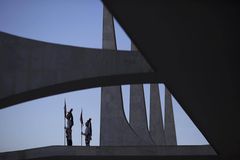 Brazil impeachment leader Eduardo Cunha jailed on corruption charges
October 19, 2016
Follow Stephanie Nolen on Twitter @snolen
Report an error Editorial code of conduct
Due to technical reasons, we have temporarily removed commenting from our articles. We hope to have this fixed soon. Thank you for your patience. If you are looking to give feedback on our new site, please send it along to feedback@globeandmail.com. If you want to write a letter to the editor, please forward to letters@globeandmail.com.
Comments