Brazil's lower house of Congress voted to impeach President Dilma Rousseff on Sunday night, after a raucous session that capped a week of marathon debates. The impeachment question now moves to the Senate, where in the next few days the upper house is expected to accept the question and open a trial. At that point Ms. Rousseff must step aside for 180 days and will be replaced by her Vice-President, Michel Temer.

The final count – 367 in favour, 137 opposed and seven abstentions – was an ugly defeat for Ms. Rousseff, who in the last days made a desperate effort to hold on to the presidency by offering positions and control of ministries to small political parties.

"It's with great honour that the shout of hope from millions of Brazilians comes in my voice," Bruno Araujo, who represents the northeastern state of Pernambuco, said as he cast the decisive 342nd vote in favour of impeachment, giving the motion a two-thirds majority.

Ms. Rousseff's government is in the grip of a massive corruption scandal, but she is not, technically, being impeached on this issue. She stands charged with fudging state accounts to cover a gaping budget deficit – what is called here "pedaladas fiscais," or fiscal juggling – in violation of a fiscal responsibility law. She contends she did nothing many before her had not also done and that the pedaladas are not a "crime of responsibility."

But in Congress, it was the 86th member to vote who was the first to mention the actual charges against Ms. Rousseff, and fewer than a dozen would bring it up in 511 votes. Those voting against the impeachment said they were opposing a "coup."

Those in favour – who were a much rowdier caucus – spoke about the need to rid Brazil of corruption, and their commitment to their children, families and the Brazilian people. They invoked the need for a president who would further criminalize abortion, loosen gun laws and oppose rights for transgender people.

In one of the more dramatic moments, Jair Bolsonaro, who represents a far-right Christian party, dedicated his vote to the military who carried out the 1964 coup and invoked by name an infamous colonel who tortured guerrillas such as Ms. Rousseff, who fought in the Marxist underground.

Members voted verbally, one after another, many of them wearing the Brazilian flag as a cape; those on the "yes" side autographed a flag that seemed destined for a historical display case, after voting.

Ms. Rousseff has presided over the cratering of Brazil's once-vibrant economy, making a series of policy choices that aggravated a wide budget imbalance and then alienating her own base with a proposed austerity plan.

The tide appears to have turned against her hopes for political survival on March 22, when the Brazilian Democratic Movement Party (PMDB), the largest party in her governing coalition, voted to break with her, in a rowdy meeting where leaders chanted "Dilma Out!" Inexorably, since then, PMDB leaders have drawn the small parties that make up the bulk of Congress members to their side. A series of decisions by the Supreme Court, which declined to stop the process, further eroded her position.

The country's stark political polarization seems certain to increase in the coming days, as the Workers' Party takes up the position of an angry opposition. Labour unions and social movements, which credit the party for policies that helped some 35 million people move out of poverty, have said they will "paralyze" the country if Ms. Rousseff is forced out.

Presiding over the Congress session was speaker Eduardo Cunha, a senior PMDB figure who will become second in line for the presidency if the Senate approves the impeachment vote.

Two days ago, Lava Jato prosecutors released new plea-bargain testimony in which an informer says Mr. Cunha received $16-million (U.S.) in bribes, in addition to the $5-million for which he is already facing charges. He sat impassive on a dais as many of the anti-impeachment Congress members screamed denunciations at him from the floor. Even some who voted in favour invoked the charges against him. "Today we vote to impeach Dilma – tomorrow we vote to impeach you!," said Expedito Netto as he cast his vote.

More than half of the Congress members who voted have been charged or named in corruption investigations. Ms. Rousseff is not under investigation for corruption.

Mr. Temer, the man poised to become de facto president, was largely unknown to the general public until recently. But he is a veteran politician from the PMDB, who in recent days has displayed a Machiavellian streak as he angles to take over. He says he plans a government of national unity with a pro-market financial adjustment that will boost the economy.

But 58 per cent of Brazilians say he should also be impeached – he was vice-president when Ms. Rousseff committed her alleged crime – and say they want neither of the two as president. There is an impeachment case open against Mr. Temer and he was named by a Lava Jato informer as profiting from an illegal ethanol scheme at a state fuel company, an allegation that is under investigation.

Outside on the long esplanade leading up to Congress, tens of thousands of protesters for and against the impeachment gathered through the afternoon, separated by 50 metres of grass, a steel wall and a line of military police. In an inadvertent metaphor for this whole crisis, they couldn't see or hear one another across the divide.

Arno Brech, a soy farmer from Parana, came 25 hours by bus with his family to support the impeachment. "We're here for a better Brazil – we need to change this government – [Ms. Rousseff] doesn't have the capacity," he said. Revenue from his farm has fallen 20 per cent in the past two years, as prices of all inputs go up steadily, he said. "Corruption has crippled this country. They've bankrupted it."

Across the mall, the Pereira Campos family came from the interior of Goias state to support the President. "We want to make clear that Dilma has the support of the people who believe in her government," said Sonia Campos, a retired nurse. "As workers, we will lose a lot of social achievements, if she goes. As students we fought against the dictatorship and what we fought for was democracy." 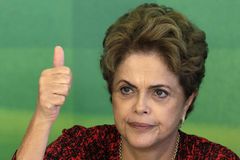 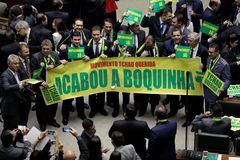