Brazil's lower house of Congress is debating a motion to impeach President Dilma Rousseff, leading up to a vote on Sunday night that has Brazilians, both pro and con, gripped in anxiety.

No matter who wins – and at this point it seems likely it won't be Ms. Rousseff – the country will not wake up on Monday with its crisis resolved, or even eased. "There is no winner, actually: This a lose-lose vote, regardless of what you think of the President," said economist Lena Lavinas, who teaches at the Federal University here.

Brazil's economy is in free fall; there is a public-health emergency, with the fast-spreading Zika virus causing strange neurological damage; and the Olympics will be held here in less than four months. Action on all of these things, to say nothing of the normal business of government, has been paralyzed for months by the political drama playing out in the capital.

As much as the country is focused on the Sunday vote, there is no realistic expectation it will provide relief. If Ms. Rousseff scrapes up the votes to stave off impeachment, she will continue to face the same entrenched opposition that has hijacked her economic reform plan and prevented her from passing meaningful legislation for months; they will be doubly determined to topple her.

But if she loses, her Workers' Party will become an equally angry opposition, determined to obstruct those who take power in her stead; the party, and the trade unions and the leftist movements with which it is aligned, have indicated they plan serious disruption if she is unseated. "Social movements are not going to give up or come in off the streets just because the institutional process is finished," said Angela Alonso, a sociologist at the University of Sao Paulo.

All of Brazil's major media organizations are keeping a running tally of Congress members who confirm they will vote in favour of the impeachment, and all hover at or over the threshold of 342 votes needed – there is a powerful bandwagon feeling against the President at this point.

Ms. Rousseff made a last-ditch appeal to the supreme court to stop the vote, but in a special session that went into the early hours of Friday, the tribunal said there were no legal grounds to stop it. Pro-impeachment Congress members have gone so far as to organize a betting pool, and are openly putting money on the number of votes by which the President will lose.

If indeed Ms. Rousseff loses, the question goes to the Senate, where a simple majority will open the case for trial – at which point Ms. Rousseff must step aside, and be replaced by Vice-President Michel Temer.

Brazil impeached another president, Fernando Collor de Mello, in 1992. Back then there were massive demonstrations day after day, because a vast majority of Brazilians were united in opposition to the Collor government.

The Rousseff case is very different: The country is sharply divided over whether her impeachment is fair or the best thing for Brazil. Some 61 per cent support Ms. Rousseff's impeachment, according to recent polls, but just 1 per cent say they would vote to elect Mr. Temer president.

With Brazil two years into a vicious recession, Ms. Rousseff is deeply unpopular and her party has been crippled by the revelations of the Lava Jato investigation into a giant graft scandal. But the President herself faces no allegation of financial impropriety. However, of the 594 Congress members who will vote on her impeachment, 318 are under investigation or face charges. On Friday, Lava Jato prosecutors revealed that new plea-bargain testimony shows $16-million (U.S.) was allegedly paid in bribes to house speaker Eduardo Cunha. He already faces charges of squirrelling $5-million (U.S.) into Swiss bank accounts. He is the chief architect of the drive to impeach the President.

The charge against Ms. Rousseff is that she manipulated government accounts, using massive loans from state banks, to cover budget shortfalls, in violation of a fiscal responsibility law.

If she goes, the new Temer government might, in its first months, receive a sort of economic bounce – investors currently bearish on Brazil might soften, as they immediately did when a rightist president was elected in Argentina in December. Already the Brazilian real has strengthened to its strongest value in nearly eight months, in anticipation of a vote against Ms. Rousseff, while the Sao Paulo stock exchange ended the week at its highest point since July, 2015.

"There might be a honeymoon," said Octavio Amorim, a political analyst with the Brazilian School of Public and Business Administration. "But it won't be a long one."

Indeed, Mr. Temer faces an impeachment process of his own, pushed by Ms. Rousseff's supporters who say that as her vice-president he must also be held responsible for any government actions that are ruled illegal. And there is a separate electoral court investigation under way into whether their election campaign was funded in part with kickbacks; that might unseat him. In addition, he has been named in Lava Jato plea-bargain testimony relating to an ethanol purchase scam through the state fuel distributor.

"Part of the people who are against Dilma are not against her in particular, they are against corruption – so they are asking for something they are not going to find with the new government," said Prof. Alonso.

"The social and business elite is waiting for something to happen so they can go back to everyday life. But the measures the [Temer] government would take are going to affect social and economic rights and employment – so you are going to have more left-oriented mobilization. Those in the middle class supporting impeachment because they think Dilma is not a good leader are going to be very disappointed when they see their jobs or businesses are under attack [in fiscal reforms]."

The left-wing opposition in Congress is not going to be large enough to block such reforms, but Mr. Temer will need the support of small centrist and right-wing parties and they, with an eye on the up-for-grabs next election, are going to be loathe to support laws such as pension reform.

And to take any dramatic action on the economy, Prof. Amorim said, "You would need a president with a strong electoral base, and we aren't going to have that until 2018, at least." He predicts Brazil could have another "lost decade" as it did in the 1990s.

Prof. Lavinas, the economist, says Mr. Temer won't have the political space to unroll an ambitious neoliberal plan, but will attempt "surgery," such as ending the indexing of the minimum wage to inflation (currently at 10.8 per cent). Even in this he will face sharp resistance.

Together, it is a recipe for social unrest, an economy that does not grow and perhaps contracts further, deteriorating conditions for the poor, and further paralysis on all levels of government – Mr. Amorim said a best-case scenario is a truce for the duration of the Olympics in August.

And the damage to this particular drama may have long-term effects. Brazil's democratic institutions, still fragile 31 years after the end of the military dictatorship, will be that much weaker, because of this use of the impeachment process. "Dilma is a disaster as a president and I am very critical – but impeachment is not an instrument of recall," said Ricardo Ceneviva, who teaches political science at the State University of Rio de Janeiro. "This is not a coup, because impeachment is indeed in the constitution. But it is not being used for the purpose for which it was conceived …. For the consolidation of democracy in Brazil, this process is very harmful." Brazil’s Rousseff accuses VP of trying to overthrow her
April 12, 2016 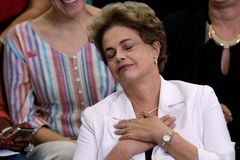