Stop a Brazilian in the street and ask them to tell you something about the new President: Most will pause. If they know anything personal about Michel Temer, it will almost certainly concern his wife, a small-town beauty queen 42 years his junior. Perhaps the fact that he dresses like a butler. Maybe that he writes poetry.

Beyond that, they will struggle, for Mr. Temer has been a powerful figure in politics in this country for decades, but he has kept mostly to the long, dark hallways of Congress in Brasilia.

"He is not the folksy kind, he is not the guy who campaigns by going to eat potato salad in people's homes," said Homar Cais, a former federal appeals court chief justice who went to law school with Mr. Temer more than 50 years ago and who remains a close friend. "He has another style of doing politics: more refined."

Refined, perhaps; certainly skilled: Mr. Temer is known as a deft deal maker who listens more than he talks. Over the years, he has been tapped to quell prison riots, student revolts and occupations by homeless people.

In the estimation of those who know him well, he is the ideal man for this fraught moment in Brazil.

"He is a natural conciliator, he has amazing skills – so important in this moment of turmoil," said Adilson Dallari, another college friend who practised law with Mr. Temer. "He will work to unite people."

Mr. Temer, 75, became acting president on Thursday morning after the Senate voted to open a trial of Dilma Rousseff, the elected leader, on grounds she violated federal budgetary laws. The Senate will now conduct a trial for up to 180 days, in which she must stand aside; the strength of the vote against her (55-22) suggests she is unlikely to return to the office.

Yet, it is not clear Mr. Temer will serve out her term. There is also an impeachment case against him before the lower house of Congress on the charge that, as Ms. Rousseff's vice-president, he must also be held responsible for any charge for which she is convicted. He has also been named in plea-bargain testimony by witnesses in the giant Lava Jato corruption scandal and is subject to investigation for those allegations.

At most, Mr. Temer can serve to the end of 2018; an electoral court ruled last week that he had violated campaign-finance laws in the past election and barred him from running for office for eight years.

Mr. Temer is the third vice-president to assume power without an election since the return to democracy in 1985, and all have been from Mr. Temer's Brazilian Democratic Movement Party (known by its Portuguese acronym PMDB). He has headed the party for 15 years. It is Brazil's largest, divided into factions from different parts of the country and it has no real ideological platform other than obtaining power.

The PMDB has previously entered alliances with right-wing parties, but was the largest part of Ms. Rousseff's leftist coalition. As a politician, Mr. Temer has cultivated the malleability and negotiating skills to thrive in a range of environments.

Mr. Cais said Mr. Temer was political from their student days, and characterized him as "a Christian democrat."

"He has Christianity and democracy as his dogmas," Mr. Cais said.

He insisted that his friend never had the ambition to be president and was always content with a backroom role, but in recent weeks Mr. Temer has begun to seem a master tactician. He was twice Ms. Rousseff's running mate, but the two were never close.

And in early April, Mr. Temer distributed an 13-minute audio recording on WhatsApp of a speech he might make should he become president. He said it was an accident, but the speech contained promises and platforms that served to make a potential Temer administration appealing to a range of constituencies.

For Ms. Rousseff's defenders, the moment was the falling away of the traitor's mask. Humberto Costa, a Workers' Party senator, called Mr. Temer the "conspirator-general" and said he had turned the vice-presidential residence "into a market stall at which he negotiated positions and favours to overthrow Dilma for the chair she conquered through the sovereign will of the Brazilian people."

The cabinet Mr. Temer has now assembled contains figures from a range of political parties and powerful influence blocs, including the wealthy agribusiness sector and evangelical Christians.

The cabinet does not, however, contain any women – for the first time since 1979. There was a distinct paucity of women when Mr. Temer introduced his new government; among those absent was his wife, Marcela Temer. The pair reportedly met when she was 19; her mother, who is younger than Mr. Temer, accompanied them on their first date. Ms. Temer studied law, but has never worked as a lawyer, and married Mr. Temer when she was 20. They have one young child together; his other four children, from one of two earlier marriages, are older than his wife. She had his name tattooed on her neck before they were married.

Ms. Temer was recently the subject of a glowing profile in the right-wing magazine Veja, which put her on the cover with the tag line "Pretty, demure and at home." That prompted a hashtag and a stringent response from many Brazilian women.

The acting president is the author of a book of verses, called Anonymous Intimacy, said to have been inspired by Ms. Temer. He says he wrote the poems on airplane napkins while commuting between Brasilia and Sao Paulo.

The poetry did not charm literary critics. Manuel da Costa Pinto, writing in the newspaper Folha de Sao Paulo last month, remarked that pro-Rousseff protesters targeting Mr. Temer for political reasons didn't know the half of it: "If they were familiar with the content of Temer's work, maybe they would protest about other issues, for aesthetic reasons, if not ethical ones."

Mr. Temer is the youngest of eight children of immigrants from Lebanon who came to Brazil in the 1920s. He favours expensive dark suits, plain shirts and a neutral facial expression; in 1999, another member of Congress snarled, in a heated debate, "I'm not impressed by his pose as the horror-movie butler."

Mr. Temer takes office little known and less liked. In a survey in early April by the polling firm Datafolha, just 2 per cent of Brazilians said they would vote for him in the next election (which, in any case, they can't, now that he has been barred, and 58 per cent said he, too, should be impeached).

Investors are excited about regime change, but no magic fixes for Brazil’s economy
May 12, 2016 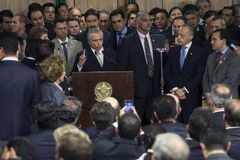 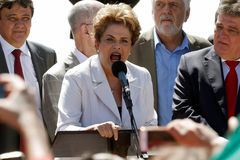