Brazilian President Dilma Rousseff has accused her vice-president, Michel Temer, of illegally attempting to overthrow her government. Mr. Temer stands poised to replace Ms. Rousseff in the event the lower house of Congress votes to impeach her in a few days. The President said Mr. Temer, who was her running mate, is guilty of "a betrayal of me and of democracy."

Momentum appears to be building toward Ms. Rousseff's ouster; leaders of one of the main political parties that was meant to be backing her announced Tuesday night that they were defecting and its members of Congress would vote to impeach her.

The President, who faces impeachment for "fiscal irresponsibility" because she used huge loans from state banks to paper over budget shortfalls, had hoped to muster 171 votes, the one-third-plus-one she would need to defeat the motion.

But the Progressive Party, which has been in Ms. Rousseff's government since the outset, announced it would leave, in theory costing her up to 47 votes. Gerson Camarotti, a political analyst with the national broadcaster Globo News, called the move "devastating" for her hopes of survival.

At the door of the meeting hall in Brasilia where the party leadership gathered, impeachment supporters blasted Celine Dion's My Heart Will Go On, better known as the theme song from a movie about a mammoth sinking ship, the Titanic.

"In Brazil, nobody likes to side with the loser – if she's being seen as a loser, the momentum is just going to build against her through the week," said Ricardo Caldas, a professor of political science at the University of Brasilia.

Earlier in the day, the President excoriated Mr. Temer, who was her running mate, in a speech in which she never spoke his name. "If there was still any doubt about the coup, the farce and the betrayal under way, there isn't any more," she said.

Ms. Rousseff's broadside seems to have been sparked by an audio recording that Mr. Temer sent to colleagues by WhatsApp, allegedly by accident, on Monday, apparently a "practice run" of the speech he intends to make when taking office. His party, Ms. Rousseff's largest coalition partner, exited her government two weeks ago with senior party figures cheering "Dilma out!" as they voted.

"Now they conspire openly, in the light of day, to destabilize a legitimately elected president," Ms. Rousseff said in a speech at an education event in the presidential offices. "Like many Brazilians, it came to my knowledge and I confess I was shocked with the shamelessness of the farce of the 'leak,' which was deliberate, premeditated, leaked to themselves; what a strange leak. Leaking it to themselves, trying to disguise the announcement of a premature inauguration, underestimating the intelligence of Brazilians."

In the speech, Mr. Temer said he would maintain popular social welfare programs put in place by Ms. Rousseff's Workers' Party, but also reduce the presence of the state in many spheres and "prioritize" the role of the private sector. Ms. Rousseff called this a direct negation of the approach favoured by those who elected her.

"They intend to overthrow, without proof or legal justification, a president who was elected by more than 54 million votes," said Ms. Rousseff, sounding more impassioned than she has at any moment through this convoluted process. "They intend to rip up the votes of these 54 million voters."

Her opponents, noting that her popularity figures are below 10 per cent, have little sympathy with this view. "I regret that President Dilma is losing her serenity and is trying to blame others for the mistakes of her own government," Romero Juca told reporters. He is a senator who heads the Brazilian Democratic Movement Party since Mr. Temer stepped down a few days ago in anticipation of his new position. "If the President wants to look for people who disrupted the government, she should take a look at her own government."

Ms. Rousseff, a former Marxist guerrilla who was tortured by Brazil's military dictatorship, has repeatedly declared she will never resign. If the impeachment motion passes the lower house in a vote that is expected on April 17, it must then pass a simple majority of the Senate, and she will be forced to stand aside for 180 days, while the Senate tries the case and then votes for a two-third majority. (She could also appeal to stop the process at the Supreme Court.) Mr. Temer would then become president, although he faces an impeachment process of his own.

Brazilian commission votes in favour of impeaching Rousseff
May 16, 2018 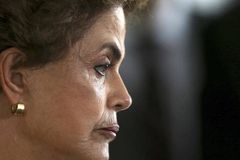 Follow Stephanie Nolen on Twitter @snolen
Report an error
Due to technical reasons, we have temporarily removed commenting from our articles. We hope to have this fixed soon. Thank you for your patience. If you are looking to give feedback on our new site, please send it along to feedback@globeandmail.com. If you want to write a letter to the editor, please forward to letters@globeandmail.com.
Comments