Alistair Darling, chancellor of the exchequer in Britain's last Labour government, neatly summed up the state of anarchy in Britain when he told BBC Radio Four that "there's no government, there's no opposition and those who got us into this mess have run away, they've gone to ground."

He was referring to the AWOL status of some of the most prominent figures in the pro- and anti-Brexit camps. Boris Johnson, the former London mayor and possible successor to Prime Minister David Cameron, only surfaced on Monday with a wildly optimistic newspaper column about Britain's future outside the EU. He had played cricket on the weekend.

George Osborne, the current chancellor, surfaced on Monday too with a similar cheery boilerplate about Britain's ability to tough out the Brexit crisis with minimal damage, even as the British and European markets continued to plummet. Meanwhile, a mutiny was under way within the opposition Labour Party. By Monday afternoon, more than a dozen shadow cabinet ministers had resigned, leaving Labour Leader Jeremy Corbyn increasingly isolated.

All this was delightfully good news for the Britons who are convinced that Britain will not leave the EU in spite of a referendum that went 52 per cent to 48 per cent in favour of exit (or Brexit). They were encouraged by the chaos within the government and opposition benches. The Conservatives are leaderless, wholly unprepared for the pro-Brexit vote and dumbfounded by the market sell-off it triggered. On Monday, S&P cut Britain's glorious, top-end credit rating by two full notches, to double-A.

They have no plan on how to disengage from Europe and later re-engage it. Labour is in no position to fight an election, let alone win one. In short, it's a top-to-bottom political vacuum.

Therefore (or so their reasoning goes), the government, or what's left of it, will not invoke Article 50 of the EU's Lisbon Treaty to formally start the negotiations for Britain's exodus. In effect, there is no one to do the pushing. Mr. Cameron said he's not doing it and repeated his vow to steer clear of Article 50 in his Monday appearance in the House of Commons. It will be up to his successor, who is supposed to be in place by September, to hit the button.

But will he, or she, find a way to dispense with Article 50? If not, when will the article be invoked? Will there be an election first, or a second referendum? All of these were open questions after the four days of teeth gnashing, hysteria, recriminations and pandemonium since the referendum. Certainly Mr. Johnson, the (as yet undeclared) front-runner in the Conservative leadership race, has given every indication that the government, whoever leads it, should take its sweet time before triggering the article.

Article 50 is a strange beast. It only came into force in 2009 – more than 50 years after the Treaty of Rome created the EU's predecessor – to give EU member countries a framework to leave the union. It is vague in some parts. "They did not expect that a member state would use it," said Nikos Skoutaris, EU law lecturer at the University of East Anglia.

For instance, there is no clarity on who actually invokes Article 50 – Parliament as a whole or the government? The question becomes all the more complicated in Britain's case because the referendum was not legally binding. If the article were to go to a parliamentary vote, Britain would not leave. That's because about two-thirds of the 650 MPs voted against Brexit.

Not open for debate is the article's asymmetrical status. The EU cannot use it to frog-march Britain out of the union. Only Britain can invoke the article, and there is no deadline. Theoretically, Britain could mope around for years before making a decision. It may want to get an election out of the way first, and a second referendum is not entirely out of the question. If the market carnage continues, and jobs disappear in the thousands as manufacturers and banks shift jobs to the continent, the people may well demand another shot at the ballot.

While the pro-EU voters and MPs hold out hope that government inertia, regrets by the pro-Brexit side or some Article 50 loophole will keep Britain in the EU, the chances of their nightmare ending seem to be falling by the hour. Mr. Cameron on Monday said that the results of the referendum must be respected. It appears that Parliament will have no say on Article 50. "If we give Parliament some kind of veto, then what was the point of a referendum?" said Keith Armstrong, professor of European Law at Cambridge University.

Megan Greene, chief economist at Manulife and John Hancock Asset Management, agrees that allowing MPs to overrule the will of the people they have been elected to represent could trigger a hellish blowback. She also noted that "pro-EU Conservative MPs might be reticent to vote against Brexit for fear of losing more ground to the far right U.K. Independence Party [UKIP]."

And what is the point of a second referendum? Generally speaking, it's considered rude to keep holding referendums until you get the result you want, though Quebec's separatists tried that stunt in 1995 (and lost). A second referendum could go even more heavily in favour of Brexit. Last week's poll was won by Brexiteers by a fairly hefty four percentage-point margin even though the assassination of Labour MP Jo Cox, who was very much pro-EU, obviously attracted some sympathy votes to the Remain side.

For the EU lovers, the Brexit nightmare is bound to continue. The markets said so again on Monday, when sterling, oil and the FTSE-100 took another tumble. Britain may not hit Article 50 quickly – it may take months, but it will be hit. For all its faults, Britain is a democracy, not a banana republic, and the Brexiteers won in a fair vote. The people have spoken.

Opinion
Moderate conservatives are in a quandary
May 16, 2018 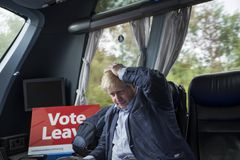 Xenophobic incidents rise in U.K. after Brexit vote
May 16, 2018 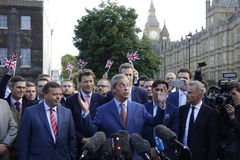 After the Brexit vote, the aftershocks: Get ready for more appeals to populism
November 12, 2017 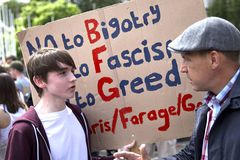