Angus Reilly took a swig of beer and shook his head as he stood outside the Liverpool Pub in downtown Liverpool.

He and dozens of other Labour Party members had gathered to bemoan the state of their party under leader Jeremy Corbyn. "I'm disappointed and, yes, I'm frustrated," said Mr. Reilly, who is 18 years old and joined the party last year. "I don't know which direction we will go."

Nearby, John Paul Cherrington said he had been on the phone for hours trying to persuade friends not to tear up their membership cards. "It's hard and it's dispiriting," he said. "I understand why people want to go, but it's frustrating."

It's a fractious time for the Labour Party, which has rarely been so divided in its 116-year history. As delegates arrived at Liverpool's BT Convention Centre on Sunday for the party's annual conference, the mood was decidedly uneasy.

For weeks, Labour has pulled itself apart over Mr. Corbyn's leadership, with a majority of the party's 230 MPs pitted against members in a confrontation that has included death threats and physical harassment. The MPs believe Mr. Corbyn is too left wing and unelectable as prime minister. The members see him as a breath of fresh air and a true disciple of Labour's roots as a socialist movement.

The infighting was supposed to end on Saturday when Mr. Corbyn won re-election as party leader with 62 per cent of the vote. Mr. Corbyn promised to "wipe the slate clean" and welcome back the dissidents. But many MPs remained unconvinced.

"He's the leader and that's the situation. But he needs to change if we're going to win the general election," said Louise Ellman, a Liverpool-area MP.

By some measures, Labour has never been in better shape. The party has no debt and it has doubled its membership to more than 500,000 in just one year. It's also won a string of recent by-elections and took back the Mayor of London's post from the Conservatives this year. And yet, there are plenty of worrying signs.

The party trails the ruling Conservatives by as much as 15 points in some opinion polls and Mr. Corbyn is far behind Tory Leader Theresa May in terms of personal popularity. Some of Mr. Corbyn's past statements have also come back to haunt him including calling Hamas and Hezbollah friends (something he now regrets saying), appearing to support the IRA and saying Britain should pull out of NATO.

None of that has dissuaded Mr. Corbyn's backers, who pour scorn on the MPs and say it's time for them to rally around the leader.

"The fact is that the members like Jeremy," said Alan Higgins, a party member and union activist. "He is quite a rarity in this day and age, a politician who actually tells the truth."

Mr. Higgins also belongs to Momentum, a socialist organization that signed up around 100,000 members to vote for Mr. Corbyn. He says Momentum has helped pull the party back to its working-class base. "I think we've got to go back to our roots."

But the divisions seem far from healed. At the Liverpool Pub, several MPs and dozens of members backed a breakaway group called Labour First, which represents the moderate wing of the party. They talked about taking back control and making the party more electable.

"For all of the difficulties and the problems that people may feel today, I say to you today, be of good heart, be of good cheer, stick together and we will win," veteran MP Hilary Benn told the crowd.

Members like Dan Callaghan say the party has a long way to go to win over people like him. He's a 25-year-old entrepreneur who runs a perfume business in Manchester. Labour "reflects my values as someone on the left, but what it's really not doing is articulating a vision," he said as he watched Mr. Benn speak at the Liverpool Pub. "I would like to see the party actually start to articulate how it's going to change and how it's going to be better." 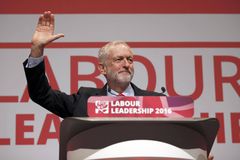 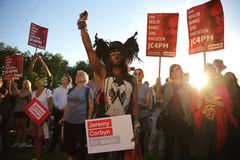