It's called Buckingham Palace, but the Queen's residence is looking far less palatial these days – and a fund set aside to help fix it has nearly run out.

There are cracks in the roof, the heating system is decrepit, most of the furniture is worn out and some of the walls are literally falling apart, a British parliamentary committee was told Monday.

The stark assessment came from Sir Alan Reid, whose official title is Keeper of the Privy Purse and Treasurer to Her Majesty the Queen. Sir Alan told the Public Accounts Committee that it will take 10 years and roughly £50-million – or $82-million – to bring Buckingham Palace, which is nearly 200 years old, and several other royal properties up to basic construction standards. Just where that money will come from is unclear, as the Queen's office has exhausted almost all of a reserve fund to cover some of the repair costs.

Sir Alan's presentation offered a rare look inside the operations of the royal household and the Queen's budget. It's all part of a new era of financial accountability for the Royal Family.

Under a series of reforms that came into effect last year, government funding for the Queen changed from several annual subsidies to one lump sum per year called the Sovereign Grant. The money funds travel, upkeep and staffing for the Queen and other royals. The changes also require the Queen's top financial official to provide details to members of Parliament about how the money is spent.

The idea was to simplify taxpayer support for the monarchy, which dates back to 1760, when George III gave the government all income generated by the Crown Estate, a collection of royal property, in return for an annual payment. Today the Crown Estate is worth about £8.6-billion ($14-billion) and returned £253-million ($418-million) in profit to the government last year.

The Queen's budget has shrunk in recent years with the onset of the financial crisis in 2007 and the subsequent recession. The government scaled back its funding, and the Queen's office cut travel costs, froze wages for most of her 436 employees and found new sources of revenue, such as renting out space for commercial events and charging admission to Buckingham Palace.

There are still many financial challenges. Despite spending cuts and increased revenue, the Queen's household had a £2.3-million ($4-million) deficit last year. To cover the shortfall, the palace dipped into a reserve fund, something it has done repeatedly over the years. The fund has shrunk from £35.3-million ($58-million) in 2001 to just £1-million ($1.6-million).

On Monday, Sir Alan told the committee that he hopes to begin building up the reserve as the Sovereign Grant increases. And he said much of the money had gone toward building repairs, something that remains a major concern.

That didn't satisfy several committee members, who questioned why the fund had been allowed to shrink so much and how the Queen's office planned to pay for the many renovations. "I'm getting more worried as we go along," said committee chair and Labour MP Margaret Hodge.

She and others peppered Sir Alan with questions about Buckingham Palace's wiring, heating system and furnishings, which are all at least 60 years old and in need of servicing. Ms. Hodge also wondered why Sir Alan hadn't done more to cut costs, pointing out that three senior executives received substantial pay increases. "That's not a very good message at a time of restraint," she said.

Sir Alan defended the budgeting, noting that the office faced added costs because of the Diamond Jubilee in 2012 and the Olympics. And he has increased revenue by offering private tours of Buckingham Palace at a premium price.

As for costs, he cited the Royal Train as a possible candidate for elimination. The Royal Train dates back to the 1840s, when Queen Victoria travelled the country by rail. The current version, which has nine carriages, was built in the 1970s and costs about £1-million per year to operate. Sir Alan said the train has about five to 10 years of service left and will then be evaluated.

The train is slow and "not luxurious by any stretch of the imagination," he said. "It would be a major decision to renew it. The figures are quite staggering."

Value of Crown Estate's property portfolio, which does not include property owned privately by the Queen. For example, Buckingham Palace is part of the Crown Estate; Balmoral is her own private estate.

How many of the Crown Estate properties are considered below "target condition." Altogether, that adds up to about £50-million in repairs.

Increase in utility bills over the past year – to £3.1-million – being blamed on a cold winter.

The estimated cost to replace that heating system, which will be necessary some time in the next three to five years.

Amount of the Sovereign Grant – what the Queen gets from taxpayers – in the last fiscal year, the current fiscal year and in 2014-15.

Decrease in funding for royal travel (at home and abroad) and palace maintenance, respectively, over the past 20 years, when adjusted for inflation.

The Queen used to receive a number of annual subsidies from the government, but that changed last year. She now receives one lump sum per year called the Soverign Grant. Here is how the grant is used. 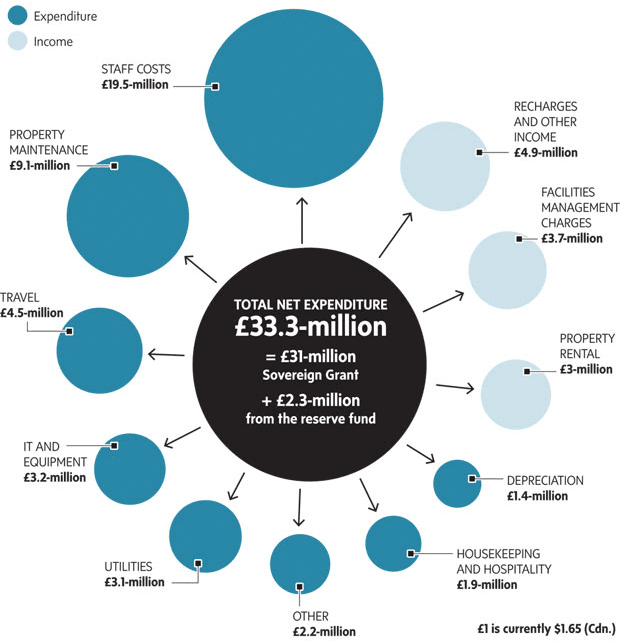 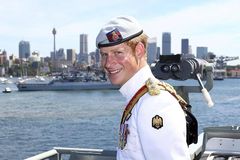