The field isn't much to look at - but for Kathryn Armstrong, it's a huge source of pride.

The youth group leader and her charges have "adopted" the field straddling Shifford Crescent housing estate in Furze Platt, some 45 minutes west of London, as part of a local council initiative. Every two weeks, armed with litter pickers, high-visibility vests and garbage bags, they comb the grass, collecting empty cans and discarded junk-food wrappers from a scrap of land that is the only spot for bored teenagers to hang out.

Ms. Armstrong's local council, the Royal Borough of Windsor and Maidenhead, is one of four "vanguard communities" in Britain chosen to pilot British Prime Minister David Cameron's much-vaunted Big Society program. The "adopt-a-street" scheme is one of Windsor and Maidenhead's Big Society strands - alongside renewable energy initiatives and the opportunity for residents to vote on council spending priorities.

Designed to devolve power from central government and promote community action, the Big Society was one of Mr. Cameron's pet projects long before the May election that propelled him to the top office - and it took just two weeks after he secured it to introduce a Decentralization and Localism Bill. Community projects will be allocated a central government staffer for guidance and support, and will be eligible for financing through the "Big Society Bank," using funds from dormant bank accounts.

Previously, Ms. Armstrong had never heard of the Big Society. But she's exactly the kind of community-oriented individual Mr. Cameron championed as he talked up the concept in his closing speech at his party's annual conference last week.

"It's the spirit of activism, dynamism, people taking the initiative, working together to get things done," Mr. Cameron said. "All over the world, governments are wrestling with the same challenges. The countries that succeed will be those that find new ways of doing things, new ways of harnessing the common good, better alternatives to the old-fashioned state."

Launching the program in July, the Prime Minister described the Big Society as "a huge culture change, where people, in their everyday lives, in their homes, in their neighbourhoods, in their workplace, don't always turn to officials, local authorities or central government for answers to the problems they face."

Comments like that have led to skeptics suggesting the Big Society is simply a smoke screen for public-sector slashing - leaving some of Britain's most vulnerable without a social safety net.

In fact, in an Ipsos MORI poll conducted just after Mr. Cameron's summer speech, 57 per cent said they believed the Big Society was just "an excuse for the government to save money by cutting back on public services."

Like all Western governments, Britain has faced crippling debt over the past two years. Its coalition government inherited a $250-billion (Cdn.) deficit - representing a whopping 11 per cent of GDP. Chancellor George Osborne's aim is to cut this down to $52-billion within the next five years, with an average public spending cut of 25 per cent. Fears of the extent of public-sector job cuts in the government's Oct. 20 spending review are so high that union leaders have been threatening nationwide industrial action.

"They want to replace full-time people or staff with volunteer activities, which we don't think is viable," said Keith Sonnet, deputy general-secretary of Britain's largest public sector union, UNISON. "We're not opposed to volunteering, we encourage it, but we're not convinced by the government's arguments."

In Liverpool, one Big Society initiative is to extend museum opening hours using volunteers. At the same time, the city's museums are facing budget cuts of 30 per cent. In rural Cumbria, where residents are banding together to buy out a struggling local pub, council leaders have warned of "a financial tsunami" as the cuts start to bite, and the local bus service has had to rely on lottery funding to keep enough vehicles on the road.

And yet proponents of the scheme insist that the Big Society is less about budget cuts and more about cutting red tape. In Cumbria, Tory MP Rory Stewart said his constituents were being hamstrung by bureaucracy. They should not, he declared in a recent blog entry, "need to answer 15 questions and pay £50 for a permit to step in their own river to repair their own weir."

The man charged with shepherding the Big Society, Minister for Decentralization Greg Clark, insisted the program's focus was decentralization, not finance.

But, he added, "I think the economic difficulties increase the case for this reform, because if you are giving a lot of orders from the centre, you've got armies of people to check that people are doing what they say they're going to be doing: gathering statistics and submitting statistics and having inspectors going out to enforce them. It's also very expensive. At a time when you want to get rid of waste, a large source of waste comes from the bureaucracy of running a centralized system."

Mr. Clark is confident that in time, even his more reticent fellow citizens will embrace the Big Society.

"I think it may take some parts of society longer than others to realize what there is available to them," he conceded. "They've been so used to being a captive of central government. But waking up to the freedoms that are now available, I think this is something that will spread like wildfire."

Opinion
The welfare state should be tough but fair
October 10, 2010 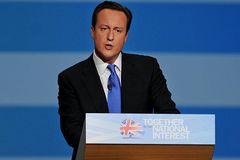