For Chinese dissidents who have fled arrest and harassment at home, Thailand has long been a safe haven. They slip across borders to Myanmar or Laos, hide in churches and eventually arrive in Bangkok to wait, hoping to resettle to a country where they can commemorate the Tiananmen Square massacre without risking detention.

But the small group of asylum-seekers in Thailand now fears its haven is no longer safe. Over the past six months, Chinese authorities have repatriated hundreds of people from neighbouring Southeast Asian countries, some using methods that critics have called abductions, in the midst of broader crackdowns on corruption and dissent that have seen more than 300 lawyers and human-rights activists arrested or questioned in China.

No one knows how many Chinese dissidents are currently in Thailand; estimates range from 10 to several dozen. But their plight poses a diplomatic dilemma for the Trudeau government, which is now being urged to risk Beijing's wrath by helping exiles China wants to bring back and punish.

"Each of us thinks we can be deported at any time," said poet and environmental activist Lu Taizhi. He is now in Bangkok but wants to come to Canada and has received a letter of protection from the United Nations High Commissioner for Refugees (UNHCR). But Thailand does not honour that document and his interview to determine his refugee status is not scheduled until May, 2018.

There is little he can do but wait.

Beijing is midway through a campaign to repatriate people it wants to punish or silence.

And Canada has been thrust into the middle.

On Oct. 28, Thai police detained Jiang Yefei and Dong Guangping, both veteran dissidents, in Bangkok, setting in motion a chain of events that led to a dramatic – but failed – attempt by Canadian authorities to rescue them from Chinese government hands.

Mr. Jiang was a demonstrator during the 1989 protests that led to the Tiananmen Square massacre and attempted to arrange a human-rights torch relay inside China ahead of the 2008 Olympics. He was arrested and tortured.

He is "a very honest person who will not surrender to evil forces," said his wife, Gu Shuhua.

But their 14-year-old daughter had been affected by constant police searches of their house. "She didn't like to go to school, was afraid of meeting classmates, meeting teachers, afraid of people knowing that her father was arrested," said Ms. Gu.

They wanted to find a place safe for them and their families. Thailand was the first step. Canada was supposed to be next.

Thailand has become a key stopping point for asylum-seekers, with a government that for many years turned a blind eye to people overstaying visas. Roughly 8,000 to 10,000 urban refugees now live in Thailand, Human Rights Watch estimates, among them Pakistani Christians, Sri Lankan Tamils, Syrians fleeing conflict – and Chinese dissidents.

But since falling under military junta rule in a coup last May, Bangkok has increasingly sought Chinese investment, and been more co-operative with Beijing.

It is "a spread of a rights-abusing dictatorial model that China has perfected through one-party rule over all these years, through its willingness to flagrantly violate human rights," warned Phil Robertson, deputy director of the Asia division for Human Rights Watch.

"Quite clearly, China has really put the pressure on Thailand to hand these people back," said Mr. Robertson.

This raises troubling questions for Canada, already one of the primary targets for the Chinese "fox hunt" for corrupt officials. Last year, Ottawa agreed to greater co-operation with Beijing on hunting for graft suspects. That co-operation is on the understanding that China will use high standards in how it treats suspects.

What's happening in Thailand "perhaps should give other countries pause when making decisions about how to co-operate with China on these extradition questions," said Joshua Rosenzweig, an independent human rights researcher in Hong Kong.

Authorities in China and Thailand said they are operating in accordance with the law.

But dissidents see new risk. In China, "this new generation of the Communist Party is growing harsher. Actually, harsh is the wrong word. They are cruel," said Shi Fukui, who fled China for Thailand in February, after being warned that he would soon be arrested. He had documented illegal school taxes, videotaped election fraud, exposed corruption among family-planning officials and gave money to a website publishing reports on graft and environmental destruction. He also signed Charter 08, a 2008 manifesto calling for the end of one-party rule.

His brother, Joseph Shi, is also a Chinese refugee who now lives in Alberta, where he is a village councillor in Cremona. Shi Fukui wants to join him, but fears he, too, will be taken away before he can leave Asia.

Last week, Yu Yanhua, a Chinese journalist and political activist, was leaving a lunch in Bangkok with other dissidents when she saw two men watching who looked like plainclothes Chinese agents. She approached and one said "hello" in Mandarin.

"We are so nervous and afraid," said Ms. Yu.

In October, Bao Zhuoxuan, the 16-year-old son of a Chinese dissident, was abducted from a guesthouse in Myanmar and brought back to China, where he is now under surveillance. That same month, Hong Kong publisher Gui Minhai, a Chinese-born citizen of Sweden, was taken from his seaside condo in Thailand.

"He was kidnapped – not arrested by Thai police. So this is even more scary," said Sheng Xue, a Toronto journalist and activist who is a close friend of Mr. Gui. Three of Mr. Gui's colleagues also disappeared. It's not clear where they are now.

They had "violated immigration law and after checking, we found that there was an arrest warrant from the source country," Thai Prime Minister Prayut Chan-o-cha said later.

With the men in detention, activists in Canada petitioned Ottawa and the UN refugee agency to step in, triggering a response the families say was extraordinarily quick.

On Nov. 6, UN officials visited the men in detention. Five days later, a Canadian official came to say they had been approved to come to Canada and told local authorities the same.

"It was brought to the government's attention that these people were being resettled in Canada," said a Canadian official who spoke on condition of anonymity. "We intervened at a high level on this."

But the next day, the men vanished from immigration prison. It was only days later that their families discovered they had been deported. It appears Chinese agents, they said, paid a fee to get the men out of detention and had them sign a paper that was only in Thai.

"Now we think that paper was the one in which they agreed to be deported," said Chu Ling, Mr. Jiang's wife. People have been "saying Thailand is just one of China's provinces. I very much agree."

The next time the families saw the men, they were on state television in China, behind bars, being interviewed by authorities. Mr. Dong described the route he took out of China. Mr. Jiang described helping Mr. Dong and said, "I feel very regretful. I will surely strive for mercy."

The news report said they have been charged with organizing illegal border crossings by others, and for themselves crossing illegally.

The deportation set off a diplomatic tussle. The government of Canada "expressed serious concerns with both countries, including our deep disappointment that the individuals were sent by Thai authorities back to China ‎despite being in possession of UNHCR protection documents," said François Lasalle, a spokesman with Global Affairs Canada.

The UNHCR, meanwhile, said it does its best in Thailand, where it is working to fill gaps in a nation that has no legal framework for refugees and asylum-seekers. The UN commissioner "cannot match the resources of a national government," said spokeswoman Vivian Tan. She added: "The most vulnerable individuals are identified and given priority," although the burden of resettlement lies with individual countries.

That's little consolation to the families.

"We are very grateful for the UN's help," said Gu Shuhua, Mr. Dong's wife, "but it is meaningless because we lost our husbands."

Soon after her husband vanished, she flew to Toronto with Ms. Chu and Ms. Chu's daughter.

They were given one-year temporary residence documents and found a small home that's in rough shape. They are financially reliant, for now, on the generosity on others, with few English skills.

She called on the Canadian government to lobby on behalf of her husband and those still left behind in Thailand. But she is not optimistic other dissidents will be able to get out.

"If the Communist Party insists on deporting them, it's very easy," she said. "There is no way to resist or oppose."

With a report from Yu Mei in Beijing 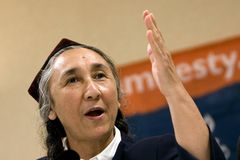