International Development Minister Marie-Claude Bibeau says Canada will increase its funding for global sexual and reproductive rights, possibly through a safe-abortion fund announced by the Netherlands this week that was in response to U.S. President Donald Trump's order banning U.S. funding for any organizations that mention abortion.

"We will definitely increase the proportion of our international assistance budget to sexual and reproductive health rights and the full range of services," Ms. Bibeau told The Globe and Mail in an interview Friday. "Whether we go through the fund or we go directly with one or the other partners, the way is not really the issue."

Ms. Bibeau said the government decided on the increased funding well before Mr. Trump signed the executive order this week.

Ms. Ploumen told the Guardian that up to 20 countries have indicated support for the Dutch plan to set up the fund. Crowdfunding is also being considered as a way to raise public funds as well, according to a post on her Facebook page.

Sandeep Prasad, executive director of Action Canada for Sexual Health and Rights, said Ottawa should join the global fund sooner rather than later.

"We need to see countries like Canada stepping up to a leadership role," Mr. Prasad said. "The need has deepened significantly with Trump's decision to reinstate the global gag rule."

Mr. Prasad said the Liberal government has only taken "baby steps" toward fulfilling its commitment to closing the gaps in reproductive rights and health care for women around the world. Last March, Ottawa announced $76-million for reproductive health initiatives, including $5-million for the United Nations Population Fund's contraceptive-supplies program. However, none of the money went to funding abortion services in recipient countries.

Ms. Bibeau said the government will launch a new initiative in the coming weeks – before the federal budget – related to what she called women's empowerment, one pillar of which will focus on sexual and reproductive rights. While she would not provide any more details about the coming announcement, the minister reiterated the fact that Canadian development funding can be used for the full range of sexual and reproductive health services, including safe abortion services.

Mr. Trump's executive order, which he signed this week, goes far beyond the orders of previous Republican presidents. Instead of merely restricting U.S. funds for family planning programs, he told his cabinet members to expand the policy drastically, restricting "global health assistance furnished by all departments or agencies."

This means it could reduce U.S. funds for fighting malaria and HIV, and many other crucial health programs in Africa and elsewhere. Nearly $10-billion (U.S.) in health programs could be affected. Thousands of independent health groups across the developing world will be in jeopardy of losing their U.S. support unless they can certify that they never mention the word "abortion." If they want to keep their U.S. funds, they must pledge to never mention the existence of legal abortion options to anyone, even in separate health programs that the United States does not support.

The optics of Mr. Trump's announcement were shocking to many observers. He signed the executive order at a desk at the White House, surrounded by a group of men in suits. No women were present. Yet those who will be most severely hurt by the order are the poorest and most oppressed women of the developing world.

Interviews by The Globe and Mail in remote parts of Africa have shown that many women would be trapped in a lifetime of near-ceaseless pregnancy and child-rearing, with as many as 10 or 12 children in a family, if foreign-funded groups did not provide contraception and education about family planning. Many women in rural Africa were not even aware of modern contraceptives until they learned about them from groups such as the UN Population Fund (UNFPA).

Two family planning groups, Marie Stopes International (MSI) and International Planned Parenthood Federation, are expected to lose 20 per cent to 25 per cent of their budgets as a result of the Trump order.

MSI estimates that the order will result in an additional 6.5 million unintended pregnancies and 2.1 million unsafe abortions over the next four years, leading to an additional 21,700 maternal deaths, unless the eliminated U.S. funds can somehow be replaced.

A study in 2011, by researchers at Stanford University, found that an earlier version of the same global gag order by former president George W. Bush had actually increased the abortion rate by about 40 per cent in 20 African countries. The main reason: the U.S. order had forced a cutback in the activities of groups providing contraception, which led to more unintended pregnancies.

Another study in Ghana found that the U.S. policy had led to the shutdown of family planning clinics and a sharp rise in unintended pregnancies in rural areas, leading to more abortions.

One international aid group, CARE, said the new Trump policy "will have harmful effects on the health of millions of women and families" across the world.

"When U.S. policy restricts access to global health services, vulnerable women and children suffer the most," CARE said in a statement this week.

In a separate executive order, Mr. Trump is expected to impose deep cuts in U.S. funds for UNFPA and other UN programs, according to leaks of the draft orders. The UNFPA could lose up to $35-million in annual U.S. funding under this order. 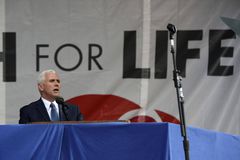 U.S. House passes bill to bar federal funds for abortion
January 24, 2017
Follow Michelle Zilio and Geoffrey York on Twitter @michellezilio @geoffreyyork
Report an error Editorial code of conduct
Due to technical reasons, we have temporarily removed commenting from our articles. We hope to have this fixed soon. Thank you for your patience. If you are looking to give feedback on our new site, please send it along to feedback@globeandmail.com. If you want to write a letter to the editor, please forward to letters@globeandmail.com.
Comments