Canada's export agency was aware of allegations against South Africa's controversial Gupta family for the past five years, yet it went ahead with a US$41-million loan to the Guptas anyway, a lawyer for the family says.

The federal Crown corporation, Export Development Canada, is trying to ground a Bombardier luxury jet that the Guptas acquired with the help of EDC financing in 2015, but it faced fierce opposition from Gupta lawyers in a Johannesburg court on Friday.

The Guptas, business tycoons who built a sprawling empire in South Africa after befriending the family of former president Jacob Zuma, have fled the country after criminal cases were opened against them for defrauding a farm project. Their links to Mr. Zuma have led to a judicial inquiry into state corruption.

The Guptas have refused to give up their Bombardier jet, even switching off its tracking device to hide its movements, and EDC says it has no idea of the plane's location. The jet has reportedly flown between Dubai, India and Russia over the past several weeks.

The Gupta lawyers, citing articles in The Globe and Mail, told the court that EDC has been aware of allegations against the Guptas since 2013, when the family first triggered a scandal by flying a planeload of wedding guests into a South African military base, bypassing normal immigration and customs procedures.

Owen Cook, a lawyer for the Guptas, noted that the wedding scandal erupted in April of 2013, two years before EDC finalized the details of its loan to the Guptas to help them buy the US$52-million jet from Bombardier.

He noted media reports that EDC has loaned money to a number of clients who have been embroiled in corruption scandals. Its reputation is already "in tatters," he told the court.

The federal agency's attempt to repossess the airplane was "a face-saving exercise," he said. "This urgent application is too little, too late to salvage its rather shaky reputation."

In its court application, EDC said it had been unaware of concrete evidence of serious wrongdoing by the Guptas "until very recently." But the Gupta lawyers ridiculed EDC for making this statement. They said it was "inconceivable" that EDC's risk managers could have been unaware of the many years of media coverage of corruption allegations against the Guptas.

In written arguments to the court, the Guptas said EDC is trying to "feign ignorance" of the controversies surrounding the family. Despite the media reports of the allegations as early as 2013, this did not deter EDC from conducting "what must have been a very profitable commercial relationship" with the family, they said.

Mr. Cook said the Guptas had a simple reason for switching off the tracking device on their airplane. "They don't want interference from EDC in their travels," he said. "They've taken a position that EDC's action is unlawful."

In its application for an urgent court order to ground the airplane and cancel its registration, EDC argues that it is facing "enormous" risk of serious damage to its reputation if it continues to be associated with the Guptas through the loan.

"There is a very real concern that the aircraft may be used to escape justice or for some other unlawful means," EDC said in a 428-page affidavit last month.

In court on Friday, EDC lawyer Alfred Cockrell said the agency has refused to accept payments from the Guptas in recent months because of the "real risk" that the payments could be the proceeds of crime. "The money might be tainted, to put it bluntly," he told the court.

If the court fails to ground the airplane, he said, South African prosecutors could seize the jet as part of their investigation into alleged corruption by the Guptas, which would prevent EDC from recovering its asset.

EDC wants the airplane to be placed in safekeeping at an airport in South Africa or Britain, to ensure that it does not deteriorate or become damaged.

Mr. Cook, however, argued that the plane will be better maintained if it remains in "continual use" by the Guptas. The EDC allegation that the plane could be used for unlawful activities is "highly speculative," he said.

The judge, Fayeeza Kathree-Setiloane, said she will rule on the EDC application within the next seven to 10 days. 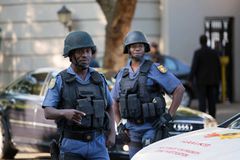 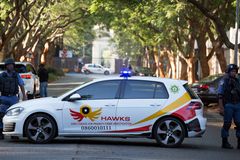