After this weekend's historic global accord in Paris, Ottawa's climate-change focus now turns to reaching a detailed national climate strategy with the provinces by early March while also moving toward a North American agreement on energy and environmental issues.

The federal government has given itself a tight deadline of 90 days to thrash out the thorny economic and environmental issues before a first ministers' meeting that will establish a Canada-wide approach to climate change.

At the same time, Ottawa says it will be working with the United States and Mexico toward a continental deal. Canadian governments of various political stripes have long sought to have the U.S., in particular, on board for major new environmental rules in order to avoid placing Canadian industry at a disadvantage.

At the United Nations summit, 195 countries reached a sweeping deal that aims to limit global warming to 2 degrees C above preindustrial levels, with an aspirational goal of 1.5 degrees, and to achieve net zero emissions by the second half of the century.

Environment Minister Catherine McKenna acknowledged the effort that will be required from the Liberal government – and the country – to achieve the 2-degree target, let alone the lower figure Ottawa endorsed in Paris.

"We've spent a lot of time focusing on getting an ambitious agreement here in Paris and then we're going to go home and figure out the plan," she said at the close of the summit. "But what is very clear is that we are going to put a price on carbon, [and] that we know that we need to move to a low-carbon economy. And we're going to figure out the tools to do that in conjunction with the provinces and territories and also the aboriginal leaders."

The fact that the international climate-change summit came so quickly after the election of Mr. Trudeau's government in October meant that the Liberals were essentially presenting the climate-change targets put forward by the previous Conservative government.

In May, the Conservatives unveiled a goal for Canada that called for greenhouse-gas emissions to drop 30 per cent below 2005 levels by 2030. Ms. McKenna has said the 2030 target would be the "floor" of what Canada's domestic plan will aim to achieve.

However, on Sunday, Foreign Affairs Minister Stéphane Dion, in an interview with The Globe and Mail, suggested it is an open question as to whether Ottawa will seek a more ambitious target with the provinces.

"Ms. McKenna said it was the floor. So we'll see if we may improve it," he said. "But I would argue though that because of the inertia of the federal government over the last 10 years, the target we have tabled in Paris is not easy to meet, contrary to common wisdom. It is quite difficult, but doable."

Conservative MP and environment critic Ed Fast said the official opposition will urge Ottawa and the provinces to maintain the existing target.

"We are strongly encouraging the Liberal government to stick with the targets that our government had set because we spent a lot of time trying to determine what exactly was achievable and then pushing the ambition to the limits of that achievability," he said in an interview.

On a possible North American pact with the U.S. and Mexico, Mr. Dion said ongoing talks with American and Mexican officials suggest a long-desired continental deal is possible.

"There is an appetite for that," said Mr. Dion. "The internal politics in the United States is something we don't control, but up to now, dialogue with the US and Mexico, without speaking on their behalf, I may say that there is an openness."

Mr. Fast said Conservatives strongly support efforts to get the U.S. and Mexico on board with a common approach to climate change. "It would be suicidal for Canada to take an approach that tilts the economic playing field against Canadian businesses," he said. While the Conservatives reached a common regulatory approach with the U.S. in some areas like vehicle emissions, a more sweeping agreement has so far proved elusive.

Concerning the Paris accord, achieving Canada's fair share of even the 2-degree goal represents a "Herculean challenge" for Canada, said David Runnalls, senior fellow at the Centre for International Governance Innovation in Waterloo, Ont.

"These kinds of reductions in greenhouse gases will not come without pain or cost, especially in an energy-intensive economy that has frittered away its earlier chance to do something," Mr. Runnalls said. He added: "In advocating a target of 1.5 C, [the Liberals] have set themselves a very difficult task when it comes to setting a new national target."

Premiers have claimed leadership in climate strategy, leaving an uncertain role for Ottawa. But so far, the provincial climate plans leave Canada falling well short of the international commitment made by the former Harper government. More action will be required to meet the Conservatives' 2030 target, a goal that was widely criticized as one of the weakest among industrialized countries.

If the Liberal government is to be true to its Paris ambition, it should commit to hitting that 30-per-cent goal by 2025, Green Party Leader Elizabeth May said in interview. That would put it on track to cut emissions by 80 per cent by 2050, a key benchmark for developed countries in the 2-degree scenario.

Echoing environmentalists and the NDP opposition, Ms. May is urging Mr. Trudeau to up Ottawa's game dramatically.

The Liberals promise to spend on public transit, green infrastructure and technological innovation. There is no shortage of advice on how to go further: Perhaps a national carbon price that builds on provincial plans; or a steep increase in federal taxes on gasoline and other fuels. There's broad agreement on the need for a robust strategy for the adoption of clean technology and support for the domestic clean-tech sector.

Perhaps the trickiest issue for Mr. Trudeau will be dealing with the Alberta-based oil industry, which even with today's depressed crude prices will see GHG emissions grow significantly in the oil sands.

Environmentalists insist there is no room in a low-carbon world for oil-sands expansion, and they are demanding the federal government block pipeline proposals to the West and East coasts that would facilitate production growth.

Alberta has released its own climate strategy, which includes economy-wide carbon pricing and an eventual cap on oil-sands emissions. But the province – which is Canada's largest producer of carbon emissions – doesn't expect them to peak until roughly 2030, though much depends on whether slumping crude prices rebound and stalled oil-sands expansion projects are restarted.

Canada's oil industry is facing a double whammy: higher carbon-abatement costs on production, but also the prospect that a determined global transition to a low-carbon economy will drive down demand for crude.

The industry is touting an innovation agenda that companies say will cut costs and reduce greenhouse-gas emissions per barrel.

That effort has to accelerate, said Corinne Boone, director of sustainable development with Hatch, a Mississauga-based engineering firm that works across the resource sector. Hatch is in discussions with Suncor Energy Corp. and other companies regarding the first commercial project using its NSolv technology, a solvent-based approach to oil-sands extraction that eliminates water use and reduces GHGs by 70 per cent.

The Paris agreement "doesn't mean we stop using oil and gas or stop developing the resources we have in Canada," she said. "I think there will be a lot of opportunity for innovative technology and innovative approaches. … But we can't afford to wait."

Editor's Note: An earlier version of this article stated that Hatch is collaborating with Suncor on an energy project. In fact Hatch is in discussions with Suncor. 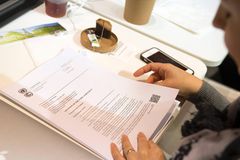 Paris climate accord marks shift toward low-carbon economy
December 12, 2015
Follow Shawn McCarthy and Bill Curry on Twitter @smccarthy55 @curryb
Report an error
Due to technical reasons, we have temporarily removed commenting from our articles. We hope to have this fixed soon. Thank you for your patience. If you are looking to give feedback on our new site, please send it along to feedback@globeandmail.com. If you want to write a letter to the editor, please forward to letters@globeandmail.com.
Comments