Export Development Canada, a Crown corporation, provided the money to a company owned by the Gupta family to help it buy a $52-million Global 6000 jet from Bombardier, the e-mails show.

The powerful Gupta family, which has close connections to South African President Jacob Zuma and a business partnership with the President's son, is embroiled in an escalating scandal over widespread allegations of corruption and political influence. The scandal has forced Mr. Zuma to face a non-confidence vote in Parliament on Aug. 8.

The e-mails were obtained by two South African investigative-journalism units, amaBhungane and the Scorpio unit of Daily Maverick, and were shared with The Globe. They are among a cache of more than 300,000 Gupta-related e-mails that have caused an explosive political scandal surrounding the Zuma government in recent weeks.

Senior officials in the government and the ruling African National Congress have confirmed the authenticity of many e-mails from the same cache.

South African media have been documenting corruption allegations against the Guptas since 2010, and a government inquiry in 2013 found that the Guptas had wrongly exploited their political influence to gain the use of a military base as landing site for a private aircraft filled with hundreds of wedding guests, bypassing the normal immigration controls.

The inquiry found several illegalities in the conduct of the officials who escorted the Gupta wedding guests.

In December, 2014, more than a year after the wedding scandal, the Canadian export credit agency EDC approved $41-million in financing to help the Guptas purchase the Bombardier jet, the leaked e-mails show. EDC is a self-financing Crown corporation that supports Canadian exports by providing financial and insurance services to Canadian exporters and their international customers.

In an e-mail during the due-diligence process that led up to the aircraft deal, dated February, 2014, and copied to the Guptas, a Bombardier official said Bombardier had consulted a private-equity firm, which said it was "okay broadly" with the "politically connected nature of the Guptas."

In the full cache of more than 300,000 leaked e-mails, many of them have shown how the Guptas have profited from their connections to the Zuma government, pocketing a slice of inflated state contracts, including coal, rail, financial services and other deals. Other e-mails showed the Guptas hiring a British public-relations firm to organize a racially divisive campaign against their critics and in support of the Zuma family.

A spokesman for EDC, responding to questions from The Globe and Mail, would not comment on any specific details of the $41-million jet-financing deal, citing rules on client confidentiality. A spokesman for Bombardier also declined to comment on the transaction, citing the same reason.

Both EDC and Bombardier say they have extensive due-diligence processes for every transaction. An EDC official told The Globe that the "top priority" is to ensure there is no corruption in the transactions that they are financing.

In a separate financing deal to help Bombardier in 2015, EDC provided a further $450-million to allow a South African state-owned company, Transnet, to purchase 240 TRAXX dual-voltage locomotives from Bombardier for a price of $1.2-billion.

South African newspapers, citing the leaked Gupta e-mails, reported this year that a Gupta-linked company received about $320-million in "consulting" fees from a Chinese rail manufacturer in connection with a separate contract in which Transnet bought 359 locomotives from the Chinese manufacturer. That contract was announced at the same time as the Bombardier locomotive contract.

A separate investigation by a South African ombudsman last year found close personal connections between the Guptas and the man who was Transnet's chief executive officer at the time of the locomotive contracts.

The Gupta family's purchase of the Bombardier jet was first reported in the South African media in 2015. In one controversial incident in August, 2015, the South African government leased the jet from the Guptas for a flight to Japan by deputy president Cyril Ramaphosa and several cabinet ministers, at an estimated cost of 5 million rand (about $400,000 at the time). Opposition parties asked whether the Guptas had benefited improperly from the lease.

The Global 6000 jet, manufactured in Toronto and Montreal, has a capacity of 17 passengers and crew and a maximum range of more than 11,000 kilometres, allowing it to fly between continents.

The e-mails show that Ajay Gupta, one of the three brothers who run the Gupta business empire, was directly involved in the negotiations over the Bombardier jet deal and the EDC financing. He was included in the e-mails on the purchase and financing details and was often directly addressed in the e-mails. He even hosted a Bombardier official at his house in 2014, several months after the wedding scandal had brought notoriety to the Guptas, the e-mails show.

The e-mails show that the Guptas and Bombardier were discussing the jet purchase as early as November, 2013. Much of the discussion in the first half of 2014 centred on the cash-flow and financial situation of the Gupta companies to ensure that Bombardier and EDC would be satisfied with the risks of the debt in the deal. The price of $52-million was settled in February, 2014.

In e-mails in July and August of 2014, an EDC official repeatedly told an official of Oakbay, the main Gupta holding company, that the borrower is required to pay EDC's due-diligence costs for the aircraft transaction, which could be $15,000 or more.

"We do not normally pay for these costs," the Gupta official responded in an e-mail to EDC, adding that, in this case, the company would consider giving $5,000 for due-diligence costs if it was "all inclusive."

By early December, EDC made a formal $41-million financing offer to a Gupta-owned company, Westdawn Investments, the e-mails show. On Dec. 31, a Bombardier sales director confirmed to Ajay Gupta and Oakbay officials that the purchase agreement had been signed and that Bombardier had received the first $4-million payment for the jet.

The Bombardier sales director said he was "dearly proud of" his relationship with the Guptas, "Welcome to the Bombardier family!" he told them.

He also included photos of the jet undergoing its finishing touches. "The paint job looks superb!" he said.

In February, 2015, the sales director sent photos of "your stunning new Global 6000" to the Guptas. It was apparently delivered shortly afterward.

In June, 2015, the Bombardier official told Ajay Gupta that he was "excited to be able to offer Mr. Gupta a second aircraft to meet their growing travel needs." He said he was discussing the financing of the possible deal with EDC. There is no record of whether a second aircraft was purchased, and EDC would not comment on it.

Bombardier has received Canadian government loans totalling hundreds of millions of dollars over the years, including a $372-million loan announced in February. Quebec pledged to invest $1-billion in the struggling jet maker in 2015.

Mark Masluch, a spokesman for Bombardier's business aircraft division, said the company must respect the "strict confidentiality clause" in its aircraft transactions. But every aircraft sale is "subject to a robust due-diligence and compliance procedure," he said.

"Bombardier will not enter or conclude any transaction to sell aircraft unless all criteria from this due-diligence process have been met," he said. "This includes background checks through independent databases that catalogue civil or criminal convictions and other proven incidences of corruption and fraud."

The EDC website says the federal agency has rules to ensure that it does not "directly or indirectly" transact business with anyone who presents "legal, regulatory and reputational risks to EDC."

To detect these risks, the agency has compiled an "information bank" of companies and individuals who could present risks for reasons including "being identified as politically exposed, being investigated, charged or convicted for illegal activities, being subject to allegations of wrongdoing or being subject to adverse media."

Phil Taylor, a spokesman for EDC, said the agency's due diligence focuses first on the transaction itself, but it also reviews the "track record" of the key parties in any transaction, including their "indirect exposure" to allegations of corruption or wrongdoing outside of the specific transaction.

"In evaluating the risks, EDC distinguishes between general allegations of wrongdoing and formal investigations or charges laid by authorities," he said. 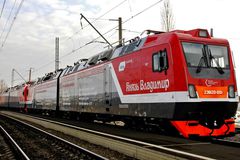 Opinion
Bombardier responds: Our activities in Russia are in compliance with the law
August 2, 2017
Follow Geoffrey York on Twitter @geoffreyyork
Report an error Editorial code of conduct
Due to technical reasons, we have temporarily removed commenting from our articles. We hope to have this fixed soon. Thank you for your patience. If you are looking to give feedback on our new site, please send it along to feedback@globeandmail.com. If you want to write a letter to the editor, please forward to letters@globeandmail.com.
Comments