Canada has joined a group of U.S.-led international donors in pledging $16-billion in aid for Afghanistan over the next four years, with some of the cash conditional on Kabul fighting widespread corruption.

The deal reached at a Tokyo conference Sunday is meant to demonstrate that Afghanistan isn't being abandoned even as its foreign supporters are withdrawing most of their combat troops by 2014, leaving Afghan forces to fight Taliban insurgents. The nearly 70 donors include countries that have kept soldiers in the south-central Asian country for more a decade.

The funds, to be dispersed through 2015, are close to estimates of what war-torn Afghanistan needs to cover the gap between what it can afford and the costs of its transition to a stand-alone, sovereign nation. Its budget almost entirely depends on foreign aid today.

At the conference Canada promised $227-million in additional development assistance between 2014 and 2017, money that will target efforts to advance the rights of women and girls – and their participation – in Afghan society. That's on top of what Ottawa has already committed for 2011 to 2014.

The latest round of international cash offers is being promised in return for new pledges of reform by the Kabul government, primarily a renewed commitment to skeptical donors that it will hold free and fair elections, advance women's rights and fight corruption.

Up to 20 per cent of the money is dependent on Afghanistan meeting standards of accountability and transparency, according to the framework adopted by the Tokyo meeting.

Chris Alexander, the Parliamentary Secretary to the Defence Minister and a former Canadian ambassador in Afghanistan, was in Tokyo representing International Cooperation Minister Julian Fantino.

"If there isn't movement on those fronts, if there isn't action soon, a variety of donors might question their commitment and I wouldn't look to one donor or another to act alone," the Canadian MP told reporters on a conference call.

"We're quite concerted in our approach to these issues ... We're very demanding of the Afghans at this point, and they know that."

Ottawa said its cash is also contingent on Afghanistan progress.

"The Canadian contribution hinges on improved accountability by the government of Afghanistan and an ability and willingness to deliver on its commitment to a democratic society, based on credible and constitutional elections, the rule of law and strengthening of anti-corruption and good governance efforts," said Stephanie Rea with the Minister of International Cooperation's office.

The pledge came as a horrific new video was circulating showing a 22-year-old Afghan woman being executed for adultery by the Taliban – a reminder of how vulnerable Afghan women remain.

Even as allies are keen to demonstrate that they are not leaving Kabul to to fend for itself, there's tremendous and widespread frustration that the Karzai government has failed to do enough to fight corruption.

"Our impression to date is literally that President Karzai and his team have not been serious on this issue and that has to end," Mr. Alexander said.

"We're not saying everyone is corrupt," he added. "It's far from being the case, but there are some obvious cases that need to be dealt with much more, with a much, in a much firmer way."

Major donors warned they will monitor Afghanistan's progress to ensure it's not squandering the assistance. Afghanistan has received nearly $60-billion in civilian aid since 2002.

"We have agreed that we need a different kind of long-term economic partnership, one built on Afghan progress in meeting its goals, in fighting corruption, in carrying out reform and providing good governance," U.S. Secretary of State Hillary Clinton said at a press conference in Tokyo.

Donor nations will review Afghanistan's progress at a follow-up conference in 2014.

Ms. Clinton also made a forceful plea for the rights of women in Afghanistan Sunday.

"The United States believes strongly that no nation can achieve peace, stability and economic growth if half the population is not empowered," she told the Tokyo conference.

–With files from Associated Press and Bloomberg

new
Canada pledges another $227-million in aid to Afghanistan at Tokyo meet
May 1, 2018 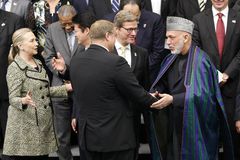 U.S. soldier alleged to have massacred Afghans had previous clashes with the law
May 3, 2018 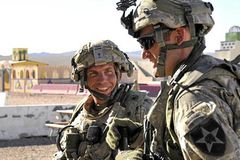 Buying progress in Afghanistan
May 1, 2018 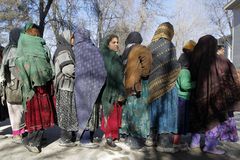