One Canadian was killed and two more were injured after gunfire erupted inside a Mexican resort community popular with tourists, and friends of the man who was slain say he was a gentle soul with two young children at home.

Gunshots broke out inside the Blue Parrot nightclub in Playa del Carmen early Monday. Five people were killed and 15 were injured in all. Video from the scene showed patrons who had been attending an electronic music festival ducking for safety, while others stampeded for the exits and down city streets.

Friends and colleagues identified the deceased Canadian as Kirk Wilson, a long-time Toronto nightclub security guard who had been working as a supervisor at the BPM Festival.

"He was just a genuine, one-of-a-kind guy," Neil Forester, a friend of Mr. Wilson's, said.

"He was the first guy you called whenever you needed something."

Odie Lu, a former club promoter, said Mr. Wilson could be intimidating as a doorman but was pleasant and friendly once his guard was down.

"He made everyone feel safe. He was the gatekeeper," he said.

Global Affairs Canada in a statement said its thoughts and deepest sympathies were with the families and friends of those victimized by the shooting. Though Mexican officials initially said two Canadians had been killed in the incident, Global Affairs confirmed late Monday only one of the deceased was Canadian.

"Consular officials in Playa Del Carmen and Mexico City are in ongoing contact with local authorities as they continue to address this tragic incident, and are providing consular assistance to Canadian citizens affected by the incident, including two who have been injured," Global Affairs wrote in its statement.

Miguel Angel Pech, the attorney-general for Quintana Roo state, ruled out terrorism as a basis for the attack. He said the shooter evidently tried to enter the nightclub around 2:30 a.m., but was denied access because he had a gun.

He then began to exchange fire with another person, and festival security personnel who tried to stop the shooting came under attack, Mr. Pech said. He said 20 bullet casings from three different pistols were found at the scene, but it was unclear if the security detail was armed or fired any of the weapons.

Mr. Pech said the gunman himself apparently escaped, though three people had been detained nearby. It was not known if they had been involved in the shooting.

Three of those killed were part of the security detail at the festival, Mr. Pech said.

Tyler Klee, a New Zealand tourist, was outside the club when the shooting began and said "everyone was terrified."

"… We were running away and then you hear more shots fired, like you don't know if you're going to [get] shot in the back or not," he said.

The shooting occurred near the club's largest exit, forcing some patrons to scramble over a metal fence to escape to the beach.

Jeffrey Castelein, a forklift operator from Belgium, said he heard 15 to 20 shots before he and his friends leapt the fence. His group then became separated until everyone made it back to an apartment. "It was the longest 20 minutes of my life," he said.

The lone woman among the deceased was apparently killed during the stampede.

Mr. Forester, an event promoter, said Mr. Wilson was married, in his 40s and had been residing in the Hamilton area. He said Mr. Wilson's family was "obviously devastated and shocked."

Mr. Forester said his friend cut a striking figure while on duty, a husky 6-foot-6 man with long dreadlocks coming down his back, which earned him the nickname "Kirk with the dreads."

Mr. Wilson had worked two decades doing security at high-profile Toronto venues, especially those of nightclub mogul Charles Khabouth, such as Rebel, Uniun and the now-defunct The Guvernment.

"Kirk Wilson was a long-time employee and great friend of INK Entertainment. Our team is overcome with grief over this terrible tragedy," Mr. Khabouth's company said in a statement.

Mr. Wilson was among the security staff brought in from Canada for the BPM, an electronic dance festival founded a decade ago by two Canadian promoters, Craig Pettigrew and Phillip Anthony Pulitano.

BPM – which stands for "Bartenders, Promoters and Musicians" – was wrapping up early Monday when the violence erupted.

"Three members of the BPM security team were among those whose lives were lost while trying to protect patrons inside the venue," the festival organizers said in a statement Monday.

Peter Donaghy, an American photographer present at the Blue Parrot, praised the work of the security staff. The security guards moved toward the gunfire to keep patrons safe, Mr. Donaghy (@DonsLens) said on Twitter.

"The #blueparrot security at #bpmfestival stood up for us when there was gunfire they are the real heroes," he tweeted.

In a subsequent tweet, however, Mr. Donaghy questioned the safety of both the locale and the event.

"playa del carmen is not safe at all I will not be returning to #bpmfestival ever again," he tweeted.

Playa del Carmen had largely been spared the violence that has hit other parts of Mexico.

The state tourism department called the shooting an "isolated act of violence." It said "the situation in Playa del Carmen is under control and Mexican and foreign tourists can feel protected and safe." 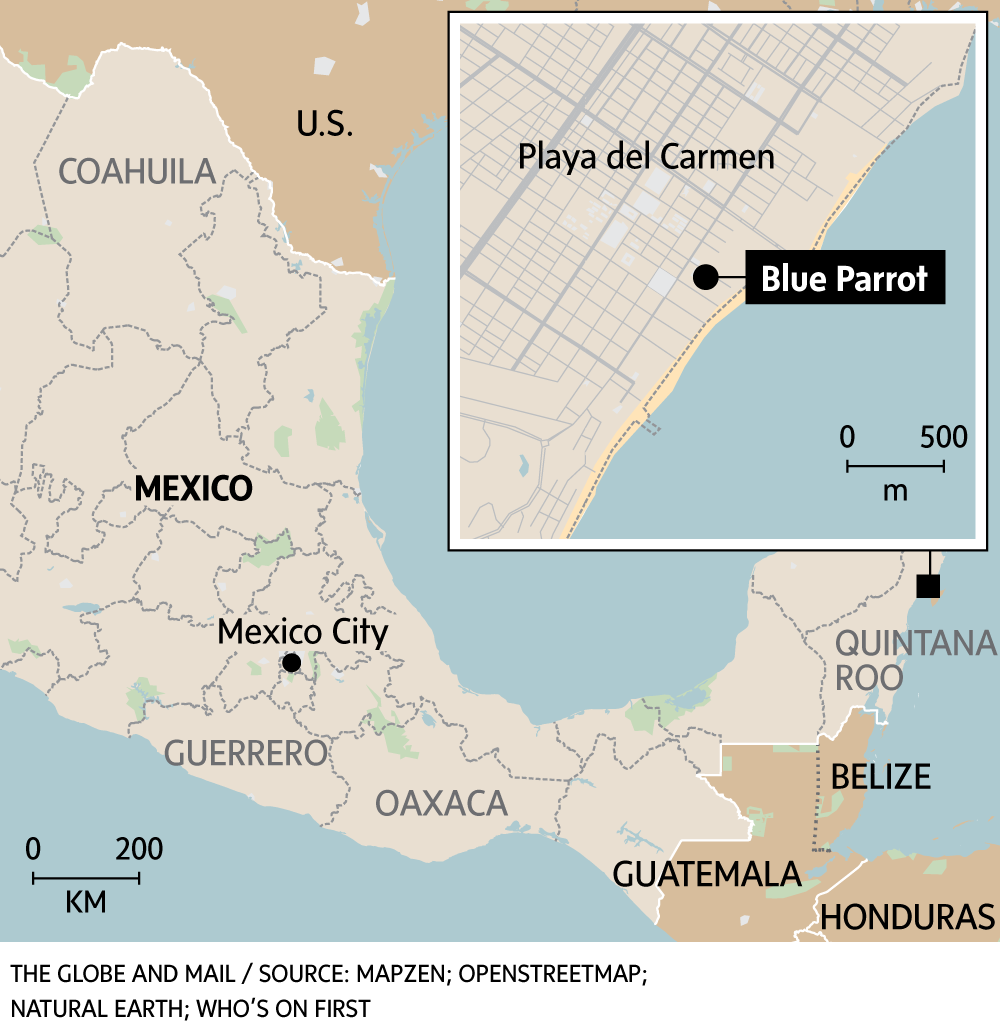 View more suggestions in Following Read more about following topics and authors
Follow Tu Thanh Ha and Sunny Dhillon on Twitter @TuThanhHa @TheSunnyDhillon
Report an error Editorial code of conduct
Due to technical reasons, we have temporarily removed commenting from our articles. We hope to have this fixed soon. Thank you for your patience. If you are looking to give feedback on our new site, please send it along to feedback@globeandmail.com. If you want to write a letter to the editor, please forward to letters@globeandmail.com.
Comments