Globe and Mail: Do you remember where you were on July 20, 1969, when Neil Armstrong took the first step onto the moon?

Chris Hadfield: It was a watershed moment in my life, although at the time I didn't know it was going to be. There had been a build-up to it, of course, with the space race. Because I was about to turn 10, I was aware of that as the first big news item that I knew about as a young Canadian growing up.

We were at my parents' cottage near Sarnia, Ont., on an island in the St. Clair river. We didn't have a television so we went over to our neighbour's place and everybody was in their living room – there were probably 25 people. My brother and I were sitting up on the back of the sofa with our backs against the wall. And, at the time, you knew it was a big event, this was a major event in human history – even as a nine-year-old kid.

I remember, afterward, walking outside and looking up, and seeing the moon and thinking that we had managed to figure out a way to go there. That people had organized and somehow schemed and planned and plotted and invented and taken the very edge of what they knew and gotten to that place for the fist time in human history. And I just found it absolutely inspiring; fundamentally inspiring. And I resolved that night, July 20, 1969, to be an astronaut when I grew up – you know, me and ten million other people. That looks like something really interesting to do with your life. And so, absolutely, Mike [Collins] and Buzz [Aldrin] and especially, of course, just because of the symbolism of it, Neil, inspired me to the life that I've followed ever since.

How would you describe the feelings you had when you watched him land on the moon?

I think it's sort of like the feeling you have when a fellow Canadian – unexpectedly or against all odds – wins gold at the Olympics. You have this great sense of pride, of being impressed at human accomplishment, at taking great heart just at what people can be capable of when they really organize and push themselves. And that shared sense of the wonder of humanity and the things that we can do when we really put our best and our minds toward something. And so that was the emotion of it for me; was just a combination of wonder and shared pride and delight at human accomplishment. I just thought it was tremendous.

Did you have any other aspirations when you were a child, before you saw Mr. Armstrong walk on the moon?

I grew up on a farm and worked hard and I decided, well, farming is a great way to raise kids, but I decided that wasn't what I wanted to be my profession. My dad is a pilot also. But for me, right from the beginning, I hadn't really decided – it wasn't as if I changed my mind, I just resolved in my mind that day that that was what I wanted to do. I wanted to fly in space, I wanted to be like Neil.

Tell me about your encounters with Neil Armstrong?

Now, it's not like I'm any sort of friend of Neil Armstrong's, but I met him several times. And he's a very private man – he had to be – the level of focus was such that he could never go anywhere again in his life and just be himself. So he elected to try to retain some level of normalcy and privacy and decency in his life. But I met him several times and he's just a wonderful example of a good human being who had great skills, who used them to the best effect he could his whole life and tried not to revel in past accomplishments nor to rest on his laurels, but just tried to every day lead a good and worthwhile and honourable and respectable and productive life. So I have great respect for Neil.

You're talking from Japan, at the base of Mount Tsukuba. What are you up to?

I'm training in Japan right now because I'm leaving for space in about three and a half months. A crew mate and I, one of the guys I'm flying with, are climbing Mount Tsukuba. The town where astronauts and cosmonauts train in Japan is a science city, sort of like Star City in Russia. And this is a local mountain – it's not huge – but on a Sunday, it's a good thing to do.

You're leaving for space in three and a half months. Where exactly are you going?

We're launching on Dec. 5 from Kazakhstan – I'm flying a Russian rocket ship; I'm sort of like the pilot or the co-pilot of it. We're going up to the International Space Station and I'll be living on the space station for six months. And for the last three months I'll be the commander of the International Space Station. So I'll be living in space for half a year, starting on Dec. 5. And very much a continued legacy of what Neil started in 1969. Very much resting very firmly on the bedrock of accomplishment that he laid down, so the chance to be able to do that is very much at the grace of what all the people in the past have done and most specifically he and his crew. 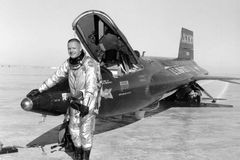 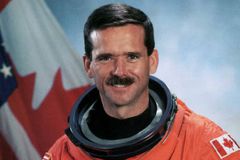 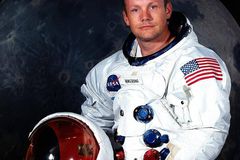