A Canadian-owned company sold more than 170 armoured vehicles to South Sudan's military in the midst of a brutal civil war, a United Nations report says. Some of the vehicles were later observed in heavy combat zones, according to a separate report by an arms-control advocacy group.

Human-rights observers, including UN experts, have documented how South Sudan's army has engaged in massacres, rapes, looting, arbitrary arrests and a scorched-earth strategy against civilians since warfare erupted in December, 2013. Tens of thousands have died in the violence since then, making it one of the world's bloodiest conflicts.

The armoured vehicles sold to South Sudan were manufactured by Canadian-owned Streit Group at a factory in the United Arab Emirates, a UN expert panel said in a report submitted to the Security Council earlier this year.

A Globe investigation over the past 18 months has documented Canada's sales of arms overseas to countries with poor human-rights records, including a $15-billion deal to sell weaponized armoured vehicles to Saudi Arabia.

In April, The Globe reported that a UN panel accused Streit Group of violating an international arms embargo on Libya in 2012 by selling armoured vehicles to the country without obtaining advance approval from a UN sanctions committee.

Streit Group, founded in Ontario in the 1990s and owned by Canadian businessman Guerman Goutorov, describes itself as "the world's leading manufacturer of armoured vehicles."

The secret Saudi memo: Dissecting how the document contradicts Ottawa

A spokesman for Canada's Global Affairs department said this week that the federal government "takes seriously" the issue of arms exports, but he described Streit's sale of armoured vehicles to South Sudan as a transaction between that country and the UAE, since the vehicles were manufactured in a UAE factory.

When arms equipment is manufactured outside Canada, even if the company is Canadian-owned, the federal government considers those sales to be outside the jurisdiction of Canada's export controls. Critics have called this a "loophole" that should be closed. Canadian diplomats in UAE have described Streit as a Canadian company.

The UN expert panel, established by the Security Council to monitor the UN sanctions against those responsible for the South Sudan conflict, says Streit sold 173 Typhoon and Cougar armoured personnel carriers in 2014 to South Sudan's national army, known as the Sudan People's Liberation Army.

The panel said the armoured vehicles from Streit Group belong to the SPLA, but were imported and maintained by Crown Automobiles, a company owned by Obac William Olawo, a South Sudan businessman with close connections to South Sudan's President Salva Kiir.

The panel gave no details on the army's use of the vehicles. But a separate report, by U.S-based research and advocacy group Control Arms, described how the SPLA used 50 Cougar and Typhoon armoured personnel carriers that it obtained from Streit Group's UAE factory between 2012 and 2014 for $9-million (U.S.).

"Both the Cougar and Typhoon APCs were subsequently observed in different locations within South Sudan between May and December, 2014, including in areas of Unity State where the conflict has been intense," the group said in a report.

South Sudan's purchase of armoured vehicles from Streit Group was also confirmed in a separate database maintained by the Stockholm International Peace Research Institute, although this database cited a smaller number, 45 vehicles, acquired from 2012 to 2014.

Streit Group did not respond to e-mailed questions from The Globe and Mail. But its website includes the address of a Streit Group sales office in South Sudan, and it has told defence-industry media that it has sold armoured vehicles to South Sudan.

Last year, the U.S. government imposed a $3.5-million (U.S.) fine on companies affiliated with Streit Group and two of its corporate officers because of nine unlicensed sales of armoured vehicles to foreign countries from Streit factories in the United States.

Arms exports to South Sudan could also be a violation of the international Arms Trade Treaty, approved by the UN General Assembly in 2013 and ratified or signed by 133 countries since then. The treaty would ban the export of weapons to specific countries if the weapons could be used for serious human-rights violations.

A public-opinion poll this month found widespread concern in Canada about the sale of weapons to human-rights violators.

Canada has never signed the treaty. The government announced last month that it will sign it next year, but it also said the signing won't lead to any change in Canada's existing rules.

Atrocities and war crimes by all sides in the South Sudan conflict have been well-documented since the war began in 2013. An inquiry by the African Union, for example, found that the government and rebels had committed massacres, rapes, beheadings, ethnic cleansing, forced cannibalism and other atrocities.

The UN expert panel, describing a government offensive in Unity State last year, said the SPLA and its allies "continue to implement their scorched-earth strategy, with egregious human-rights abuses, massive forced population displacements, the systematic destruction of livelihoods and food crops and the raiding of cattle."

The panel added: "The ultimate objective of the government offensive appears to be to render communal life unviable, leaving the population with nothing."

Because of the human-rights abuses, Canada and the United States have already imposed sanctions on specific individuals in South Sudan who are blamed for the conflict.

"Estimates of casualties due to the conflict range from 10,000 to 40,000 people and are possibly much higher, and over 1.5 million have been displaced internally or as refugees," Global Affairs says on its website in explanation of the Canadian sanctions on the South Sudanese individuals.

South Sudan was strongly supported by the United States and Canada in 2011 when it became the world's newest independent country. But since then the country has spiralled into political chaos and ethnic conflict.

A new eruption of bloodshed this month in South Sudan's capital, Juba, has sparked renewed demands for an arms embargo. More than 300 people were killed in several days of heavy fighting between forces loyal to President Kiir and the forces of his rival, Riek Machar. Civilian neighbourhoods were shelled, and shells hit UN compounds where civilians took shelter.

On July 11, UN Secretary-General Ban Ki-moon urged the UN Security Council to impose an immediate arms embargo on South Sudan. Dozens of human-rights groups, including Amnesty International and Oxfam, have made the same demand.

"Rarely has a country squandered so much promise, so quickly," Mr. Ban said in a statement. "What kind of leadership is it that resorts to deadly weapons and identity politics, time and again? Failed leadership." 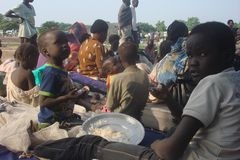