As China's acrid air exacts a mounting health toll, Canada's embassy in Beijing is pouring taxpayer dollars into purifying pollution, spending $175,000 in the past two years to buy crates of high-end filters for its staff.

Faced with growing difficulties getting people to Beijing – and keeping them once they arrive – embassy officials are also looking at compensation for workers whose stays in China stand to permanently damage their health.

"It has become a major problem, and unfortunately it will take many years for the situation to improve," said Guy Saint-Jacques, Canada's ambassador to China, in an interview Wednesday. The embassy, which has 70 Canadian workers, has seen qualified candidates drop out of competition for jobs after assessing the Chinese air quality. Staff with families in China have also declined to extend their postings "because they are concerned about the pollution," he said.

Staffing concerns have become an acute problem for foreign companies and countries operating in China, where air quality regularly descends to a level considered hazardous to human health. In Beijing, pollution ranks as the top concern among two-thirds of companies recently surveyed by the European Union Chamber of Commerce in China. It's also driving wealthy Chinese outside of the country, as those with the means are ordering family members to flee to places where children don't risk lifetime consequences from merely breathing.

"The number of millionaire families that have air pollution as one of their top reasons to leave China for Canada" has become a palpable trend in recent years, particularly among those with asthmatic children, said Richard Kurland, a Vancouver immigration lawyer who, through access to information, unearthed an early 2013 e-mail showing the Beijing embassy's initial plans to buy more air purifiers.

He offered sympathy for embassy workers in China. "People don't realize that the foreign service of Canada is not a cakewalk, and gone are the days of champagne and fancy parties," he said. "The reality is that a significant number of Canadian embassy posts are hardship postings."

Mr. Saint-Jacques said he discussed the smog problem with senior officials in Ottawa last week. He said it is important to "look at all the measures that we could put in place to reassure people."

That extends to money. The Japanese company Panasonic in March announced it would offer extra "smog pay" to expat workers in Beijing, and Mr. Saint-Jacques has been asking other companies what they give employees.

"Based on all those comparisons, we are also looking at what else could be done to make sure that we meet the fiduciary obligations of the government toward the employee," Mr. Saint-Jacques said.

Beijing is already considered a level-four hardship post by the Canadian government, placing it in the company of Bogota and Caracas. (Cities such as Baghdad and Islamabad are level five, the highest.) The level-four calculation, which is based in part on local pollution levels, qualifies a worker with a family of four in Beijing for roughly $15,000 in annual hardship pay.

The embassy has spent heavily to protect its Canadian staff in their Chinese homes, too. Over the past two years, it has purchased 106 Blueair air-purifying units at a cost of $81,000. It spent another $93,000 on air filters, which are expensive and must be changed regularly, and a further $2,500 on an air-testing unit.

That unit has been deployed to employee homes on bad-air days to make sure the filters are working properly and ensure air meets World Health Organizations guidelines. If there are problems, more filters can be installed. In one case, a family stopped using a bedroom after a leaky window allowed foul air to enter.

The embassy has not purchased filters for its Chinese staff, saying its obligations to local workers extend only to keeping a healthy workplace at the embassy. It has, however, brought employees into briefings with local hospital officials and Health Canada.

Mr. Saint-Jacques has also begun considering much more drastic measures – such as barring some vulnerable family members from China.

The embassy wants to "to look, in the long run, at what else we should take into account. Because, to give you an example, there are some missions around the world where we don't allow children," he said. The government is "not at the stage" of making such a decision, he said. But, he added: "If you expose a child to severe pollution below the age of eight, they could have permanent damage to their lungs."

The bad air isn't all bad for Canada, however, as the embassy also seeks to mill profit from the smog. Among its most recent priorities is finding business opportunities for Canadian companies whose technologies may help solve the Chinese pollution problem.

Next week, a delegation of Canadian nuclear energy companies will come to Beijing to market the Candu reactor.

And in March, the embassy arranged for SaskPower, which has scrubber technology for coal-fired power plants, to make a presentation in front of China's powerful National Development and Reform Commission.

It is working to do the same for Airborne Energy Solutions, a Calgary-based company whose technology promises to cheaply remove virtually all traces of particulates, sulphur dioxides, nitrogen dioxides and other nasty byproducts from coal stacks. Airborne uses sodium bicarbonate – baking soda – as a scrubber, and turns the scrubbed material into fertilizer.

"We can remove the pollution and turn it into like a Saskatchewan day," said Murray Mortson, Airborne's president, who lives in Beijing.

But it's a small company and hopes the embassy can place it in a room with people powerful enough to offer intellectual-property protection.

"My shareholders and myself don't want to build one unit in China, and then lose everything because someone steals it," Mr. Mortson said.

China’s recent growth slowdown is no reason for alarm
April 1, 2014 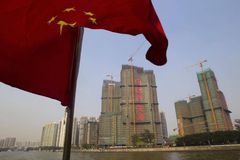