Canada's export bank says it is facing "enormous" risk of "serious and potentially irremediable harm" because the controversial Gupta family is refusing to return a Bombardier luxury jet that could be used in criminal activity.

The federal agency, Export Development Canada, has issued the warning in court documents in Johannesburg as it struggles to repossess the US$52-million Bombardier jet from the family at the heart of South Africa's biggest post-apartheid corruption scandal.

EDC, one of the largest export banks in the world, has filed 428 pages of documents in a Johannesburg court to support its urgent application to repossess the Bombardier Global 6000 aircraft. The Globe and Mail has obtained a copy of the documents.

In its urgent application, EDC says it is facing "commercial, reputational, financial and legal risks" that are increasing every day because the Guptas are continuing to make unlawful use of the Bombardier aircraft, which EDC financed.

"There is a very real concern that the aircraft may be used to escape justice or for some other unlawful means," EDC says.

The Guptas may have used "the proceeds of crime" to obtain some of the US$10-million that it paid to Bombardier as the down payment for the jet, the agency says, citing South African media reports.

The agency says it urgently needs to "decouple" from the Guptas. Several prominent multinational companies, including the British public relations firm Bell Pottinger, have collapsed or suffered potentially irreversible harm because they failed to disassociate themselves from the Guptas swiftly enough, EDC says.

The Guptas are business partners of Duduzane Zuma, a son of South Africa's former president, Jacob Zuma, who was forced to resign last week as the corruption scandal grew deeper. Investigations by South African officials have found that the Guptas wielded vast influence over the Zuma government.

The Canadian export agency provided a US$41-million loan to the Guptas in 2015 to allow them to purchase the jet, but it now says the Guptas have defaulted on the loan. It says the jet's public tracking device has been deliberately disabled to allow the jet to be hidden.

South African police say they have issued arrest warrants for others in the Gupta business empire, including Ajay Gupta, who met a visiting Bombardier vice-president in 2014 in Johannesburg to negotiate the aircraft purchase.

In its court documents, EDC said it was unaware "until very recently" of any concrete evidence of serious wrongdoing by the Guptas. Critics of the agency, however, have argued that EDC failed to look closely enough. South African media have been reporting on allegations of wrongdoing by the Guptas since 2010, and the Guptas triggered a major scandal in South Africa in 2013 when they obtained the use of a military airport for a planeload of wedding guests so that they could bypass the country's normal immigration channels.

In its court application, EDC says it has no idea of the current location of the Bombardier jet. Flight-tracking websites have said that the jet was flown from India to Russia earlier this month, but then the tracker was switched off and there has been no information on its movements.

"The aircraft is currently being used for unknown purposes and in whatever way the Gupta respondents see fit, without EDC's knowledge, despite EDC's substantial interest in it," the agency says in its court application.

It says it has exhausted every other avenue to recover the jet. "The Gupta respondents are intransigent."

Last month, in British court proceedings in connection with the same EDC loan, a British law firm on behalf of the Guptas denied that the Guptas had defaulted on the loan.

But in the documents submitted on Feb. 15 in Johannesburg, EDC cited more than a dozen instances of default on the loan by the Guptas in the period since last October.

It also noted that some of the Gupta assets have been frozen by South African courts in connection with corruption investigations. If the allegations in those investigations are correct, the Guptas illegally acquired some of their assets, which means that they "grossly overstated" their financial position when they obtained the EDC loan, the agency says.

The Globe contacted a lawyer for the Guptas and sent messages to their main holding company to seek their comments on the EDC court application, but there was no response.

A spokesman for EDC has said that the agency cannot make any official comment to the media on its court application in the Gupta case.

What the world can learn from the South African citizen revolt against Jacob Zuma
Subscriber content
January 14, 2019 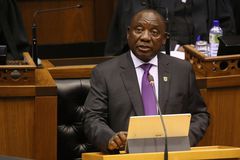 Newly elected South African President Cyril Ramaphosa vows anti-corruption fight
February 15, 2018
Follow Geoffrey York on Twitter @geoffreyyork
Report an error Editorial code of conduct
Due to technical reasons, we have temporarily removed commenting from our articles. We hope to have this fixed soon. Thank you for your patience. If you are looking to give feedback on our new site, please send it along to feedback@globeandmail.com. If you want to write a letter to the editor, please forward to letters@globeandmail.com.
Comments are closed