When the Nigerian air force killed at least 112 people and injured another 150 in an attack on a refugee camp this year, it reinforced the human-rights concerns that have halted many arms exports to the Nigerian military in recent years.

But now, under the administration of President Donald Trump, a major U.S. weapons export is going ahead – with Canadian components in the deal.

Human-rights groups and U.S. politicians are questioning the sale of warplanes and ammunition, worried that the Nigerian military is continuing to kill and abuse civilians in its operations against the radical Islamist militia known as Boko Haram.

The U.S. deal is the second substantial military sale to Nigeria that includes hardware from Canadian sources this year, but neither will be subject to a review by the Canadian government or Parliament because of loopholes in federal regulations. The other deal involves the sale of 177 armoured vehicles to the Nigerian armed forces from a Canadian-owned company.

The Nigeria deals were revealed at a time when Canada is under growing scrutiny for its decision to authorize the sale of weaponized armoured vehicles to Saudi Arabia, which has a record of human-rights abuses. The Globe and Mail reported in July that the Saudi military appears to be using Canadian-made combat vehicles against Saudi citizens.

The federal government promised last year that it would sign the Arms Trade Treaty, a global agreement to regulate arms exports. At a conference on the arms treaty in Geneva this week, a federal official insisted that Canada already conforms to the "spirit" of the treaty, despite the Saudi deals, according to an observer from Project Ploughshares, a Canadian disarmament group, who is at the conference.

The U.S. sale of $593-million (U.S.) in warplanes and ammunition to Nigeria was finalized last month. It includes a dozen A-29 Super Tucano warplanes, equipped with engines manufactured by Pratt & Whitney Canada, which is based in Longueuil, Que. The export also includes thousands of bombs and rockets, plus 20,000 rounds of machine gun ammunition.

As part of the deal, the United States promises "special training" of the Nigerian military to "minimize civilian harm" – an implicit acknowledgment of the human-rights concerns.

The other export deal was announced in June by Streit Group, owned by Canadian businessman Guerman Goutorov. It began with a shipment of 25 armoured personnel carriers, the first batch in an agreed sale of 177 armoured vehicles to the Nigerian military, the company says.

Neither deal required a Canadian government approval because the products are not being exported directly from Canada to Nigeria, analysts say. The Pratt & Whitney engines are supplied to a Colorado-based company, Sierra Nevada Corp., which is the prime contractor for the Super Tucano sale to Nigeria. The Streit armoured personnel carriers for Nigeria are manufactured at a Streit-owned production facility in the United Arab Emirates, according to Nigerian media reports.

Neither company was willing to comment on the Nigeria sales. Streit's policy is "non-engagement with the media," according to a communications firm that has worked for Streit in the past.

On its website, Streit said its export to Nigeria includes Spartan armoured vehicles, which have applications "ranging from a battlefield ambulance up to a fully armed direct-fire vehicle." It also includes Typhoon mine-resistant vehicles, which are used primarily as a mounted infantry troop carrier.

Marc Duchesne, a spokesman for Pratt & Whitney Canada, declined to comment on the Nigeria deal. "We will not comment on this story; the U.S. government cleared the Tucano sale to Nigeria," he said.

Ken Epps, a policy adviser at Project Ploughshares, said his group is concerned about the loopholes that allow Canadian equipment to be sold in U.S. arms exports without federal authorization.

"We are concerned that the transfer of aircraft powered by Canadian-built engines will proceed without any required review or reporting by the Canadian government," he said.

The U.S. Super Tucano warplanes will support Nigerian counterterrorism and counterinsurgency operations against Boko Haram and will also counter illicit trafficking, according to the U.S. Defence Security Co-operation Agency, which gave details of the deal.

It said the export deal will include "special training on the law of armed conflict and human rights, and air-to-ground integration to minimize civilian harm in air operations."

Even before the refugee-camp bombing in January, the Obama administration had frozen arms sales to the Nigerian military for the past several years because of frequent reports of military abuses.

But less than a month after the refugee-camp bombing, Mr. Trump spoke by telephone to Nigerian President Muhammadu Buhari and promised to "cut a new deal" on weapons sales, a Nigerian government statement said.

Several human-rights groups, including Amnesty International, have expressed alarm at the aircraft sale. "Without strong human rights structures in place, the transfer of the Tucano attack aircraft armed with heavy machine guns could exacerbate the conflict, or fuel new ones," the groups said in a letter to U.S. Congressional committees in May.

Two U.S. senators, Cory Booker and Rand Paul, have also protested against the aircraft sale, accusing the Nigerian military of "flouting the laws of war" and massacring hundreds of Nigerians. 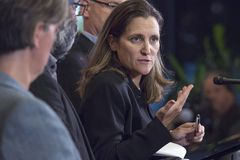 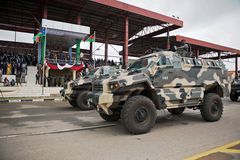