A medical clinic funded by Canadians in the Syrian city of Aleppo was destroyed by bombing Friday, part of an escalation that was swiftly condemned by the international community.

The Al-Marjeh primary health care centre was hit around midday and badly damaged, although no one was hurt, according to Dr. Anas Al Kassem, the head of UOSSM-Canada, a non-profit group that funds the clinic. The attack was just one of four on medical facilities on both sides of the front lines Friday, according to the International Committee of the Red Cross, just a day after a massive blast at the Al-Quds hospital killed at least 50 people, according to Médecins sans frontières (Doctors Without Borders).

"Fortunately we were not operating on [Friday], so no casualties, but it was badly damaged with the lab, X-ray department and the dentist clinic destroyed," said Dr. Al Kassem.

Dr. Al Kassem, a Syrian-born Canadian surgeon, said he believes the hospital was targeted either by Russian or Syrian government forces, as none of the rebel factions or the Islamic State has proven itself capable of carrying out air strikes.

"It's got to be either the regime or the Russians. People on the ground, they've become quite expert, they tell us if it's very accurate and smart missiles it is Russian. So we believe it's Russian, but there's nothing to confirm."

The attacks on health-care facilities represent yet another terrifying development in the Syrian civil war. Over the last week Aleppo has once again exploded in violence with at least 200 killed in air strikes, according to reports. The Syrian government announced a ceasefire in some areas near Aleppo, but the city itself remains a battleground. The United Nations said the recent surge in violence showed a "monstrous disregard" for civilian lives.

Marie-Claude Bibeau, Canada's Minister of International Development, said Canadians are outraged by the deliberate targeting of volunteers, humanitarian workers and medical personnel coming to the aid of the Syrian people.

Dr. Al Kassem said that although he hasn't received an official report on the damage to the clinic, he expects the facility, which saw 1,900 patients last month, will have to be abandoned and reopened elsewhere in Aleppo.

"They're targeting civil community centres everywhere, including health care centres, as we saw two days ago. The people are scared, they're panicking, they're leaving the city …Things are getting really bad."

UOSSM-Canada hasn't sent any Canadian nurses or physicians to the area since 2014, due to the dangerous conditions. It operates the clinic from Canada and sends supplies and medications that it receives primarily as donations from NGOs and health facilities here in Canada. Its 11 Syrian health-care facilities received $3-million last year, according to Dr. Al Kassem.

The clinic is located near the city centre and cares mainly for women and children. It does not perform surgery or care for those wounded in the conflict, Dr. Al Kassem said.

The UN has called on Moscow and Washington to help restore the ceasefire to prevent the collapse of peace talks, which broke up this week in Geneva with virtually no progress after groups opposed to the regime walked out.

Aleppo, Syria's largest city before the war, has been divided for years between rebel and government zones. Full control would be the most important prize for President Bashar al-Assad, who has been fighting to keep hold of his country throughout a five-year civil war that UN mediator Staffan de Mistura says has killed up to 400,000 people.

Since Russia joined the war last year with air strikes against Mr. al-Assad's enemies, battlefield momentum has shifted in the government's favour.

Hundreds of thousands of people still live in rebel zones of Aleppo, and the countryside to the north includes the only stretch of the Turkish-Syrian border still in the hands of Mr. al-Assad's main opponents, Arab Sunni Muslim rebel groups.

Opposition groups accuse the government of deliberately targeting civilians so they will abandon the area.

With reports from Gloria Galloway in Ottawa and Reuters

Canadian surgeon risks his life to help Syrians caught in civil war
May 16, 2018 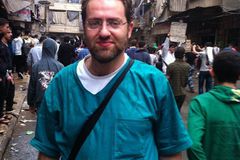 Refugees in Canada haunted by news of family left behind in Syria
May 16, 2018 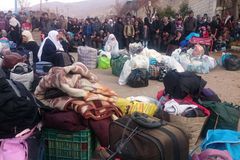